AngularJS vs Vue.js: Which is the Best Front-end JavaScript Framework? 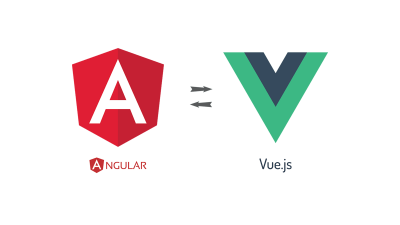 You won’t believe it, but there are around 24 JavaScript frameworks and approximately 83 libraries ‘fighting’ to get into your project. Some of the JS frameworks are completely free, some are paid – but they all have one thing in common: They all want you to use their framework! In this blog, we will be discussing AngularJs vs. vue.js, the two popular frameworks for web development.

These frameworks help to simplify the development effort for building large applications by providing features like data binding, architecture, testability, or sub-applications development. Among these frameworks, two major front-end ones are AngularJS and Vue.js, which offer multiple possibilities to build complex web applications with ease.

But the question remains unanswered: Which frontend development tool is better, AngularJS or Vue.js?

Well, to answer this question, we have stepped in to help by giving the point of view in this AngularJs vs. Vue.js comparison to help you make the right decision when starting your next web development project.

We have worked with several companies, and each one has its own needs, requirements, and preferred tools. For this reason, the ‘best Javascript framework’ for you might not be the best one for others.

Let’s go through the main AngularJS and Vue.js features to find out which one fits best for your project:

While Angular.js, the Google-backed framework, has been at the top ranks since 2010.  On the other hand, Vue.js, created by a former Google Employee, Evan You, in 2014, is a newcomer that has captured a high amount of interest from developers.

This is what made it reach over 189k stars on Github in 2021. It was the most popular front-end JavaScript framework in the year as per the rankings of best of.js.org. 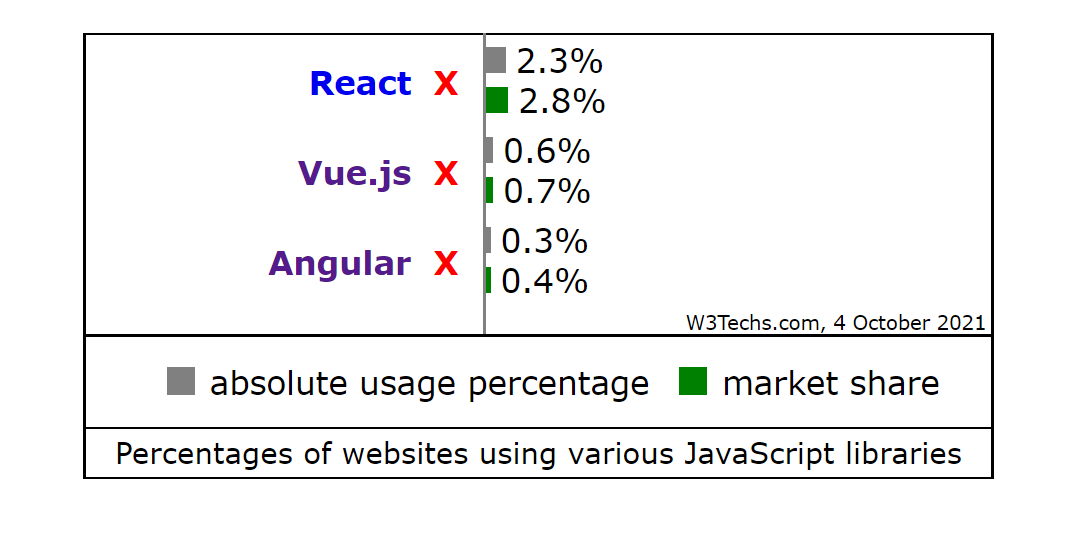 Let’s have a look at some of the highlights which show how these two frameworks perform in web application development individually:

1. AngularJs vs Vue.js: Angular.js is opinionated and heavy, but high on functionality. Whereas Vue.js is flexible and light but prefers speed over function.

Angular is based on a well-formed structure made out of heavy codes, and Vue.js is lighter and more flexible. This is because Angular has a large set of enclosed features that the developers can put to good use. However, in most cases, most of these features and functions are not used for the application.

The Vue.js sheds a lot of weight by not having too many additional features in its main library.  All features should be added through additional extensions, making it more modular than the Angular framework.

But the well-built structure of Angular provides more scope for adding additional features to the application. The lower size of Vue.js is perfect for implementation if an application doesn’t need a large set of functionalities.

At the same time, Angular.js can be rigid as compared to Vue.js since it is opinionated. This means that the developers must build the application in a way as intended by the framework. The latter provides more freedom for Vuejs developers in this aspect.

Considering all the advantages and quirks, Angular.js should be the best choice for dynamic projects that use most of the framework’s features. In comparison, Vue.js would be better for small projects and other applications that prefer faster speed over greater functionality.

2. AngularJs vs Vue.js: Angular.js has a steeper learning curve, therefore, you need more experienced full-stack developers for your project. While both Angular.js and Vue.js use HTML and CSS, the former use TypeScript, a superset of Javascript created by Microsoft. This means that developers must be familiar with the use of TypeScript if they are working with Angular.js, Or else they’ll have to learn it from scratch to make the best use of it for developing the application.

Though it must be said that the learning curve is well worth the time and effort since TypeScript is in many ways superior to vanilla JavaScript in terms of functionality. At the same time, the advantage of Vue.js development services here is that it can be used to its full potential even with pure JavaScript. This eliminates the need for developers to have additional background knowledge.

3. AngularJS vs. Vue.js: Angular.js has more resources and support, but Vue.js is catching up

Though one minor criticism with Vue.js has been that its ecosystem is broader in the Chinese regions, this has led to differences in communication due to a higher amount of Chinese developers within the community.

Why & When should you choose Angular.js?

— Angular.js has a comprehensive set of functions and an opinionated structure. This makes it more suitable for large-scale, dynamic, and real-time applications such as instant messaging and chat apps.

— Angular.js is based on HTML syntax rather than SPA (Single Page Application). It removes the necessity of writing long codes, and it’s effortless to maintain.

— Angular was built with testing in mind, so it has an extensive set of test rules that can be used for verifying your code.

— This modern framework can be seamlessly integrated with any web technology like .NET, Ruby on Rails, or PHP platforms through RESTful JSON service APIs.

What are the key features of Angular?

— It’s a complete MVC framework, and the significant features include two-way data binding, directives, controllers, user-friendly services, and routing mechanisms. These components can help you build dynamic websites with no effort at all.

— It provides modules that are used to organize code into manageable chunks. This means that you can easily reuse, update, and maintain your web applications.

— Angular has a comprehensive testing framework that makes it easier to validate your web applications.

— Angular uses Express JS as a backend, making it easy to set up and update the app on different platforms.

What are the tools available to build an Angular.js app?

— Angular IDE is a Firefox-based extension that provides features like syntax highlighting, code completion, Bower integration, etc. It works on all platforms.

— If you are using Sublime Text or Atom, you can use the ANGULARJS package to enhance your productivity. You can even install plugins for Visual Studio Code, WebStorm, and Brackets.

— AngularJS Batarang is a Chrome extension that works on all platforms. It provides debugging capabilities to inspect the scope and data of your app.

Why & When should you choose Vue.js?

If all you want is a lightweight, single-page web application, then Vue.js is the best choice.

— Vue.js allows you to use HTML as a template language, which means that you can quickly learn it even if you’re not well-versed with JS.

— It has fewer options than AngularJS but is highly versatile and fast. This makes it easier for developers to come up with innovative solutions using Vue.js.

— You can build a complete web app in no time with Vue.js, so it’s great for prototyping and building small- to medium-scale apps.

If you are using Drupal 8 with Webpack, you can use the Veux parser to implement Vue.js in your project smoothly. You can also use Nuxt.js for building server-side rendered apps with Vue JS 2.

What are the key features of Vue.js?

— It’s a lightweight, flexible, and robust JavaScript framework that is perfect for small- to medium-scale projects.

— Binding data in templates is simple in Vue.js, which is one of its primary features.

— There’s no need to compile the template before rendering it explicitly.

— Event management in Vue.js is straightforward; it can give you excellent performance compared with other libraries like React or AngularJS.

What are the tools available to build a VueJS app?

— Vue CLI provides a simple command-line interface to craft your frontend workflow. It is built on top of Webpack, Babel, ESLint, etc., so you can use it for web apps, single-page applications (SPA), and progressive web apps (PWA) development.

— Vue.js dev tools is an extension for debugging your Vue.js apps in Chrome and Firefox.

— Vue.js site provides a list of other helpful tools for crafting SPAs with Vue.js.

Both of these frameworks would provide an excellent structure for your application. Talking about AngularJS vs Vue.js, you can choose according to your requirements. If you want a framework that’s almost considered as an industry standard and is well-trusted. Then AngularJS web development is the way to go. However, if your application demands a single-page layout and wants it to be fast, light, and clean, then there could be no better choice than Vue.js web development.

Now that you’ve got a better understanding of Angular vs Vue, you might be looking for the best development team to get your work done. Well, look no further as PixelCrayons can fulfill all your software development needs, an award-winning Digital Consulting & Engineering Firm offering end-to-end solutions to Enterprises, Digital Agencies, and Startups. With a 100% Money back guarantee, our dedicated team of professionals will deliver to the best of your expectations and give your application the edge it needs to surpass the competition. Here are some of our USPs:

Though AngularJS and Vue.JS both have similar concepts, they are different in many ways. So it’s challenging to say AngularJS is better or Vue.JS is better.

For example, Angular.JS was built by Google and had a huge developer community behind it. Yet, on the other hand, Vue.JS was built by a single person who happens to be one of the core developers of React JS, which also has excellent support from Facebook developers. So neither Angular JS nor Vue JS can be called better.

However, we can say that Angular and Vue are best in their own ways. Plus, depending on your project needs and developer support, you can choose the best one for your business.

We cannot say that Vue is dying because it is growing at a fast pace. As compared to other JavaScript frameworks, Vue is increasing at an average of 135% per year.

Vue JS was introduced seven years back, and since then, it has multiplied. The reason for its rapid growth is that Vue is simple and easy to learn. It is compatible with different browsers, which means you can use it for any project, be it a business site or an eCommerce site, or a mobile app. Furthermore, Statista 2021 says 18.97 percent of surveyed software developers reported to be using Vue.js.

Yes, there are many things that Vue JS and Angular have in common. They both have a concept of templates, components, dependency injection.

In terms of features, they are almost identical; however, there are few differences between them. For example, Angular is an MVC framework, whereas Vue is not an MVC framework; it is an open-source model-view-view model (MVVM) JavaScript framework.

Well, there is no denying that Vue.Js has set out to be a strong competitor in today’s market, and it seems like they will continue being successful for many years into our future! Not only do their features offer limitless potential.

But they also make building dynamic single-page applications easy as pie with rich content management system capabilities–which means developers don’t need an expert team behind them or any experience whatsoever!

Besides, it’s been predicted, Vue.Js will account for 34.4% of all front-end framework development in the next year alone and by 2023.

Angular is a versatile framework that can be used for both public-facing and internal applications. Google uses Angular for varieties of its products, including Google Ads (Adwords), Google Cloud Platform, etc.

Many other companies also use Angular to build web and mobile apps, such as Walmart, Upwork, Freelancer.com & Bloomberg TV.

Vue is used by a lot of developers who work with React. It can also be used for web development and provide a layer to connect with servers and handle the routing on the client-side. Some of the sites that are using Vue are Expedia, Alibaba, Adobe, WizzAir.

In short, Vue is being used by many developers in creating apps that have “heavy” client-side interactions.

4 thoughts on “AngularJS vs Vue.js: Which is the Best Front-end JavaScript Framework?”