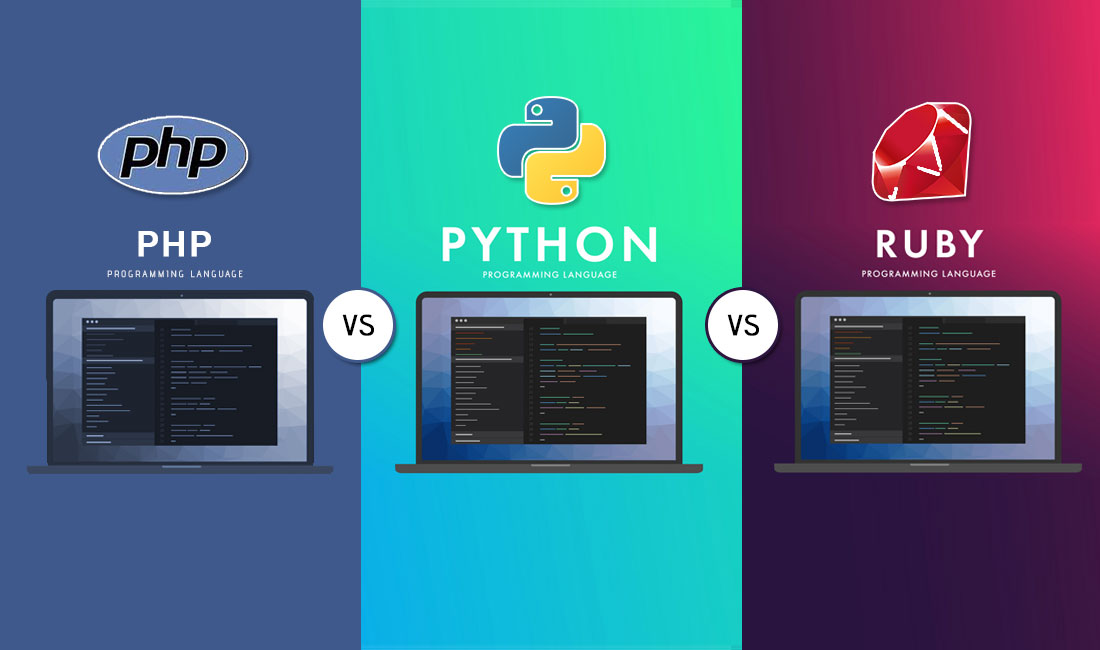 Which is the best programming technology for web app development in the year 2021-2022? This is a question on the minds of many entrepreneurs while they are selecting their technology stack for new web apps.

But, the answer to this question is NOT straightforward. Like many other choices, it depends on the requirements of the business and the nature of the application. Many factors to consider, including scalability, speed of development, security, popularity among developers, ease of learning, etc.

Are these confusing you? Don’t worry!

I’ve written this comprehensive article to help you make an informed decision. As we know, it’s very difficult to predict which programming language will dominate in 2021-2022 because it depends on many factors. But you can make a pretty educated decision on which language will be best for your app based on the current trends and statistics.

So, let’s take a look at some facts about each of these popular web development technologies:

PHP has been around for approximately 20 years and dominates the market for dynamic websites. It has been the most popular web app development language for many years, and it’s currently implemented on more than 80 million websites. In addition to powering some of the biggest sites on the internet, it is also an integral part of content management systems like Drupal, which power 10s of millions of additional websites.

The PHP ecosystem is enormous. There are many open-source PHP frameworks to choose from, with Laravel being one of the most popular ones in use today. Zend, Symfony, CakePHP, CodeIgniter are some other popular frameworks for PHP web app development.

Talking about Python has been around since the 1990s and is a modern programming language for general-purpose programming and web development. Python is currently used by Reddit, Pinterest, Instagram,  and Youtube as the back-end framework for their websites.

Python has a small but significant community of developers developing excellent open-source frameworks for web app development in Python. Django, Flask, Pyramid, Bottle are some of the most popular web app frameworks for Python.

Ruby is a general-purpose, object-oriented programming language created in Japan in 1995. It was created as an alternative to Java, and it has gained popularity over the years. It’s currently used by Hulu, Groupon, Slideshare, Scribd, and Github.

Ruby on Rails is the most reliable, popular web app framework for Ruby, powering some of the most significant websites on the internet. It’s a full-stack framework, which means that it covers all aspects of web app development. This includes HTML rendering, routing, testing, data modeling, etc.

These insights into the most popular web app development technologies(PHP, Python, Ruby). Now it’s time to compare these technologies on factors like:

Comparison of PHP vs. Python vs. Ruby

As each language has unique characteristics, here is a detailed comparison between PHP vs. Python vs. Ruby.

In 2021, the most popular software programming language worldwide is PHP, with a market share of 45.43%. (Source: Statista)

2. PHP vs. Python vs. Ruby: Website Built Using These

Many clients have chosen PHP web development, such as Wikipedia, Facebook, PixelCrayons, and popular websites. On the other hand, Ruby-on-Rails also has reputed clients, including Twitter, Hulu, Groupon, etc. In addition to this, the king of search engines Google, YouTube, etc., are made using the coding of Python. 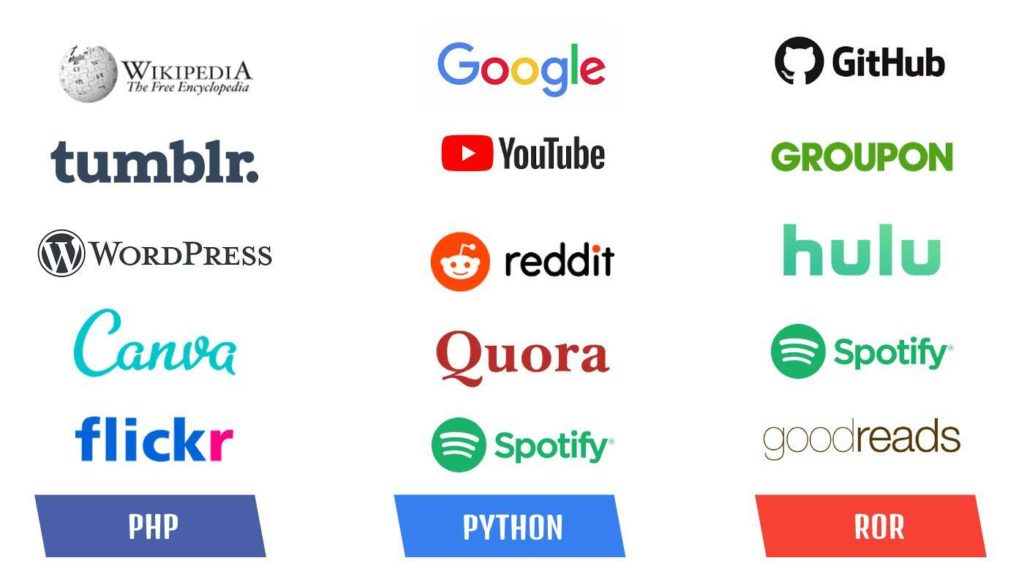 3. PHP vs. Python vs. Ruby: Usability

Programming Language Usability is one of the most important factors that you should consider before choosing it for your website development project. Almost all programming languages form an interface between computer and user, and a. language with high usability helps write short programs quickly. In short, the less complicated your programming language is, the easier it will be for users to learn & handle.

PHP stands at 3rd place with 8.5 points out of 10 points in this round. Python is a close 2nd with 9 points, and Ruby tops this round with 10 points. Ruby has a significant advantage over other languages due to its simplicity.

Ease of learning or Learning Curve is also an essential parameter for choosing a programming language as your career or for your next web app development project. A programming language with a high learning curve value is easy to understand and possesses pretty clean codes. Python has the best learning curve among these three languages, PHP comes second, and the last is Ruby-on-rails.

While choosing a programming language for website development, it’s also essential to study the historical growth of that language over the years. This metric provides you with the idea of an evolving trend of that language, and you can get an overview of changes in user preference over time. The graph below will give you a clear idea about the growth of these languages over the years. 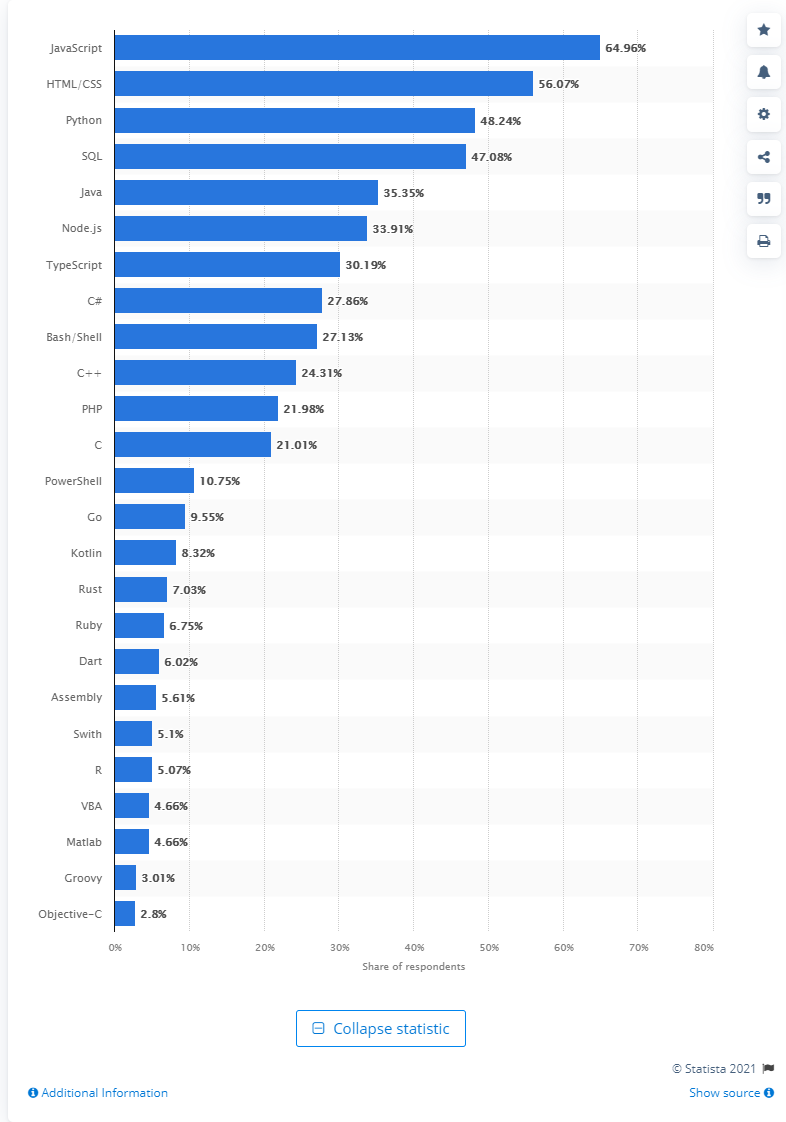 Looking at this data, it’s clear that Python is on top with more than 48%, Python stands at 2nd place with around 21%, whereas Ruby has approximately 6.7% of respondents worldwide.

Performance comparison of any programming language is crucial. A high-performing language helps you to produce scalable, secure, and speedy software programs. In the below-mentioned image, I have shown the average run time and lines of codes of all these three languages. These two parameters help you to understand and compare the performance of these three languages. 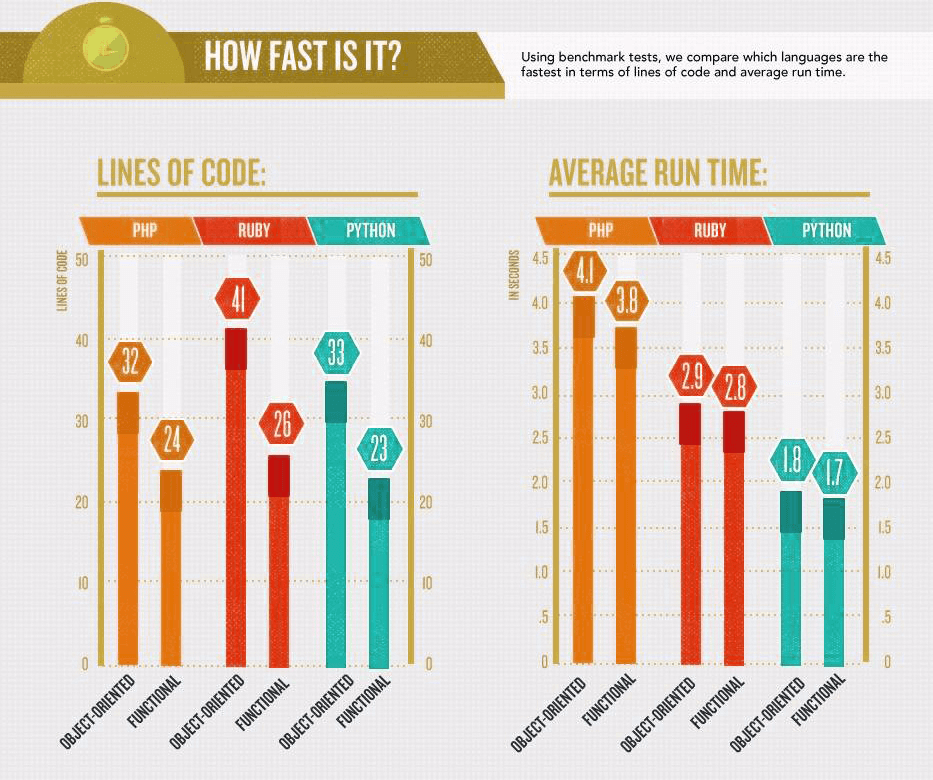 7. PHP vs. Python vs. Ruby: Most Discussed Language

According to a recent survey, it is becoming more and more usable, popular with developers in 2021. Over 19% of respondents said that they are interested but haven’t yet developed using Python.! Of those who have, over 60% said they would be hiring Python developers in the next 12 months. 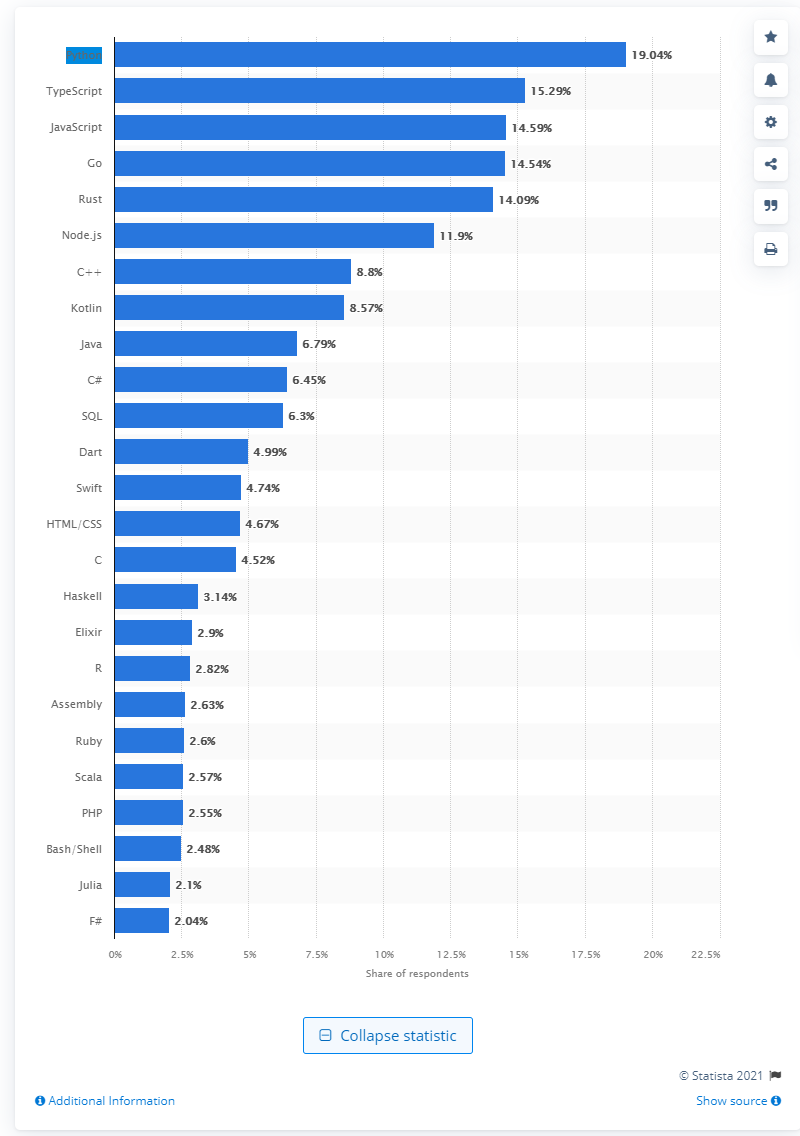 On the other hand, these stats are also crucial for those people who want to develop their websites and choose an ideal programming language. A language with many jobs certainly has more programmers, job security as well as bright career prospects. If you wish to choose your career in either of the two languages, you may check the following stats and decide.

According to the Stack Overflow survey 2021, Ruby on Rails is in the top 10 highest-paid technologies race. In comparison, Python or PHP are down the ladder. 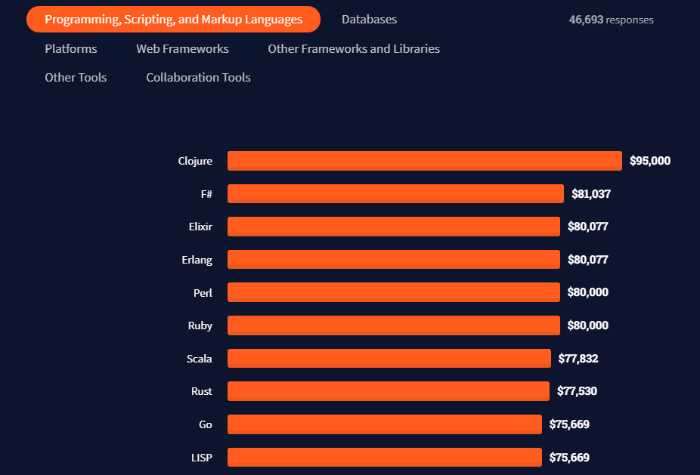 To get a clear idea of PHP or Python, or Ruby web development, you have to know the advantages and disadvantages of these three server-side programming languages.

Pros of using PHP are numerous. Some of them are as follows:

PHP vs Python vs Ruby: Pros or Advantages 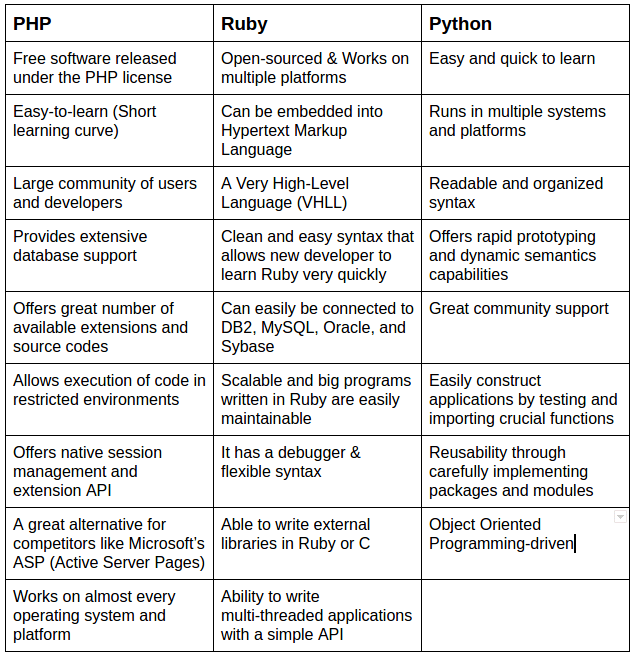 PHP vs Python vs Ruby: Cons or Disadvantages 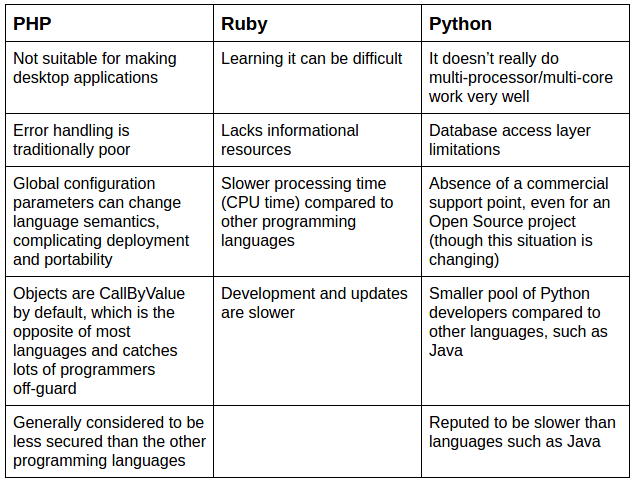 I hope this blog post clears your many doubts related to three popular programming languages. Above mentioned stats and facts help you choose the correct programming language as per your specific business needs. However, if you are stuck to any other queries related to these languages or want to develop your website, feel free to PixelCrayons: A leading web app development company in India. Our business consultants will help you in all the possible ways and help you decide which technology platform would be best for your web development project.

Python was never designed as a “web language” – it is a general-purpose dynamic language, useful for web apps, among many other purposes.

Ruby is similar to Python in its generality but is more pigeonholed as a “web language.”

PHP seems most strictly web-centric of the three languages listed.

In short, it depends on your purpose, pre-existing skills, and access to talent.

2. Which is best to build web applications: PHP, Python, or Ruby?

All languages are suitable for web applications, but Python is one of the relevant languages as The internal support for the web works very fine. You can start to build a python website with a straightforward framework such as web.py.

3. Is PHP, Python, or Ruby best for backend programming?

Python is the best for a  complex project which needs a set of libraries or a data science project. It also depends on what programming languages you are familiar with. So it depends on what type of project you are working on.

4. Is PHP faster than Ruby?

Yes, PHP is faster than Ruby!

PHP has a lower level of entry to the language. You can start by just opening up a .php file and begin writing code without worrying about creating directories or any structure. Just write your code in the editor, and it will be executed on visiting the path in the browser. Ruby also gives this flexibility to a certain degree, but it requires more configuration and discipline, due to which Ruby is not as fast as PHP.

5. Which is more popular, Ruby or Python?

Python is more popular than Ruby.

Ruby has less support and users compared to Python. Since the core features of both languages are very similar, this slight difference can significantly affect the popularity of languages.

14 thoughts on “PHP vs Python vs Ruby: Detailed Comparison”