Maintained by Facebook, Instagram and a big community of individual developers and corporations, React is one of the most sought after JavaScript libraries at present. According to JavaScript analytics service Libscore, at present React is being used on the websites of Imgur, Netflix, Feedly, Bleacher Report, Airbnb, HelloSign, SeatGeek, Walmart, to name a few.

ReactJS development (sometimes referred to as React.js or ReactJS) is a Javascript library that helps to create fast user interfaces. One of the best features of ReactJS is that it can perform on the client side as well as can be rendered on the server side, and they can work together interoperable. It is widely used for building web applications and user interfaces. 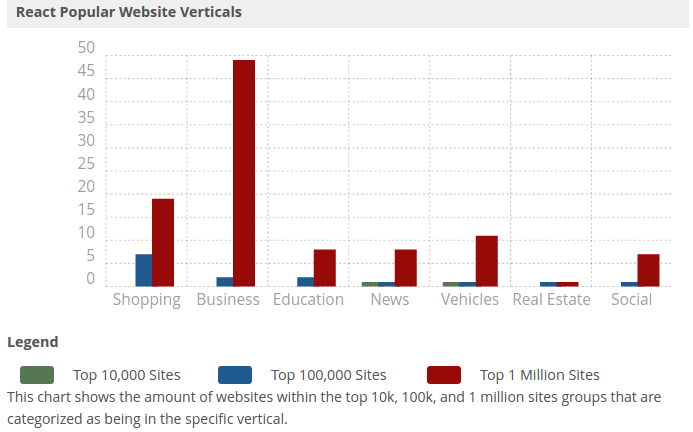 Business Benefits of working with React:

Out of the box React uses patterns that renders it somewhat hard to come up with poor code quality to boot, since it eliminates direct interaction with the DOM, it does not just replace associate existing view layer like AngularJS development services, but also removes the necessity for a variety of dependencies like jQuery which may lead to a lower size of the final codebase.

React can be injected into a very limited section on any existing page notwithstanding of how it is already been functioning and design. Which is what permits web app developers to migrate as quickly or slowly as they would like. However, it is crucial to note that React needs a runtime library to run efficiently; thus, slower and gradual migration has a somewhat negative impact on page weight until deprecated previous libraries are deleted.

React is special in its ability to offer great performance in addition to a completely managed rendering cycle for its components; this dramatically improves individual developer’s efficiency. By setting up the creation, distribution, and consumption of isolated reusable parts in a much simpler way, it enables developers to have more time to use and create common abstractions. It proves true for lower level parts like clickable buttons and higher level parts like dropdowns.

4. It improves the SEO of your web app

Improved largely by having a totally rendered page from the server to the browser. React was designed with this kind of optimization in mind. It uses Node to render on the client of the server. Similar tools do provide this server aspect for rendering, however, they need a lot of unstable hacks and a considerable quantity of developer support to keep up. React JS has the potential to modify build tooling and scale back maintenance budgets.

React mixes HTML and JavaScript following the principle that they go along all the time. Separating them is more akin to separating technologies than considerations. This idea is extended more to incorporate CSS, which removes a myriad of problems related to CSS development such as global namespace, and scope/variable isolation.

Browser Developer tools unique to React JS development services have been set up by Facebook in order to provide data regarding what exact section and what snippet of code was called on to generate every specific bit of UI. This facilitates the process of looking for errors and simply makes a developer’s life a little easier.

As it’s now customary in most current tools, Models representing data and Views displaying data are wired along to provide rich UI interactions. React’s Elementary abstraction, the component, takes in data and outputs an illustration of the Document Object Model with no further adverse effects. This allows developers not to rely on consumption, instead of allowing users to create states in the DOM making React components easier to break down and test.

1. It’s got IOS and Android covered.

Initially, Facebook developed React Native only to support iOS. However, with its recent support of the Android operating system, the library can now render mobile UIs for both platforms. Facebook used React Native to build its own Ads Manager app, creating both an iOS and an Android version. Both versions were built by the same team of developers.

Facebook also made React Native open-source, with the idea that compatibility with other platforms like Windows or tvOS could be worked on by the development community, so stay tuned.

Gone are the Webview components of other hybrid mobile apps. This is possible because React Native’s building blocks are reusable “native components” that compile directly to native. Components you’d use in iOS or Android have counterparts right in React, so you’ll get a consistent look and feel.

This component-based structure also allows you to build apps with a more agile, web-style approach to development than typical hybrid frameworks, but without any web at all. The app will have the speed, look, and functionality of a native mobile application.

3. Apply react native UI components to an existing app’s code—without any rewriting at all.

This is a huge bonus for businesses that want to augment an existing app but don’t want to overhaul it. Incorporate React Native components into your app’s code. Or, if your existing hybrid app was built with Cordova and Ionic, reuse that Cordova-based code easily with a plugin.

4. It’s one of the top mobile javascript frameworks among developers—and growing.

If you know JavaScript, React Native is a quick pick-up, essentially allowing any front-end web developer to be a mobile developer on the spot. No need to learn iOS’s Swift or Java for Android—just know JavaScript, some native UI elements, platform APIs, and any other platform-specific design patterns and you’re good to go. Also included in React Native’s library are Flexbox CSS styling, inline styling, debugging, and support deploying to either the App Store or Google Play.

React is still new, but it’s maturing quickly and Facebook has stated it plans to continue investing in its growth.

5. React Native is all about the UI.

React Native app development is focused solely on building a mobile UI. Compared with JavaScript frameworks like AngularJS or MeteorJS, React Native is UI-focused, making it more like a JavaScript library than a framework. The resulting UI is highly responsive and feels fluid thanks to asynchronous JavaScript interactions with the native environment. This means the app will have quicker load times than a typical hybrid app, and a smoother feel.

Whereas react native app development is usually associated with inefficiency, less developer productivity, and slower time to deployment, React Native is all about bringing the speed and agility of web app development to the hybrid space—with native results.

Third-party plugins mean you won’t have to rely on a WebView for certain functions. For example, if you’re adding Google Maps functionality to your app, React Native lets you link the plugin with a native module, so you can link the map up with the device’s functions like zoom, rotate, and the compass, while using less memory and loading faster. If your app supports older operating systems (and older devices), this can help you keep the app running smoothly.

Varun Bhagat is a technology geek and works with PixelCrayons as a Sr. Technology Consultant. Varun has written 500+ technology-related blogs and helps our clients to choose the best technology as per their needs.

ASP.Net vs PHP: Which is Best? Are you a business owner looking for PHP web…

AngularJS vs Vue.js Are you are a business owner looking for front-end development services, but…

Do you know what is the internet-of-things real meaning? In a nutshell, the Internet-of-Things (IoT)…

Any cookies that may not be particularly necessary for the website to function and is used specifically to collect user personal data via analytics, ads, other embedded contents are termed as non-necessary cookies. It is mandatory to procure user consent prior to running these cookies on your website.