AngularJS vs React.js vs Node.js Vs Vue.js: Which Is the Right Framework for You?

Angular or React, Node.js, or Vue.js: which is the best technology for custom web app development? Which one should we choose for our business? These are the most common questions that are often asked by ISVs and SMEs while starting their projects. In fact, many enterprises find the Angularjs vs Nodejs vs Reactjs vs Vuejs debate as the ultimate solution for finding out the best frontend framework. According to a report, 40.14%, 22.96%, and 18.97% of developers want to use React, Angular, and Vue.js, respectively. Have a look at the chart below that confirms the same. 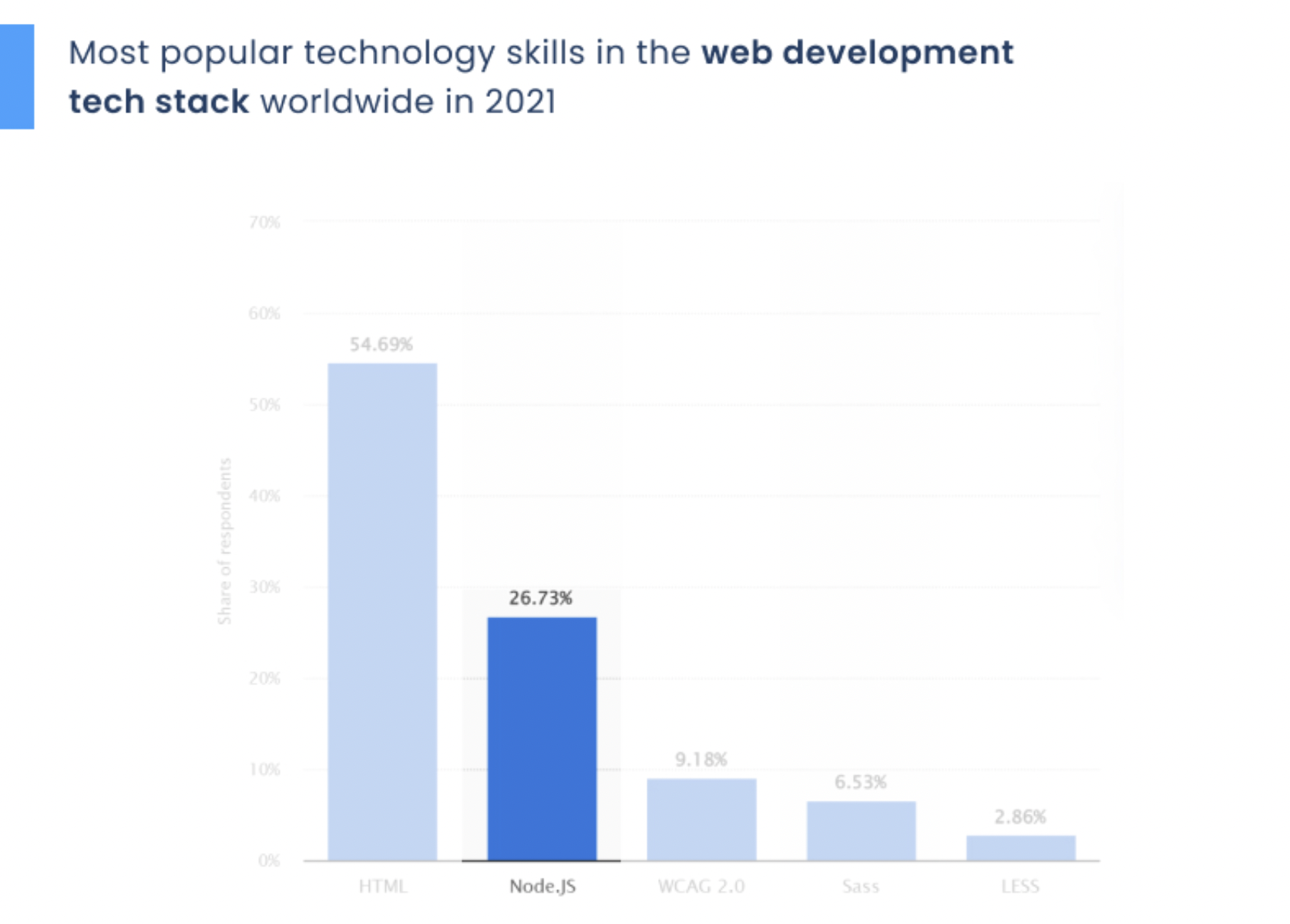 Similarly, according to another report, Node.js ranks second in the list of most popular technology stacks globally. 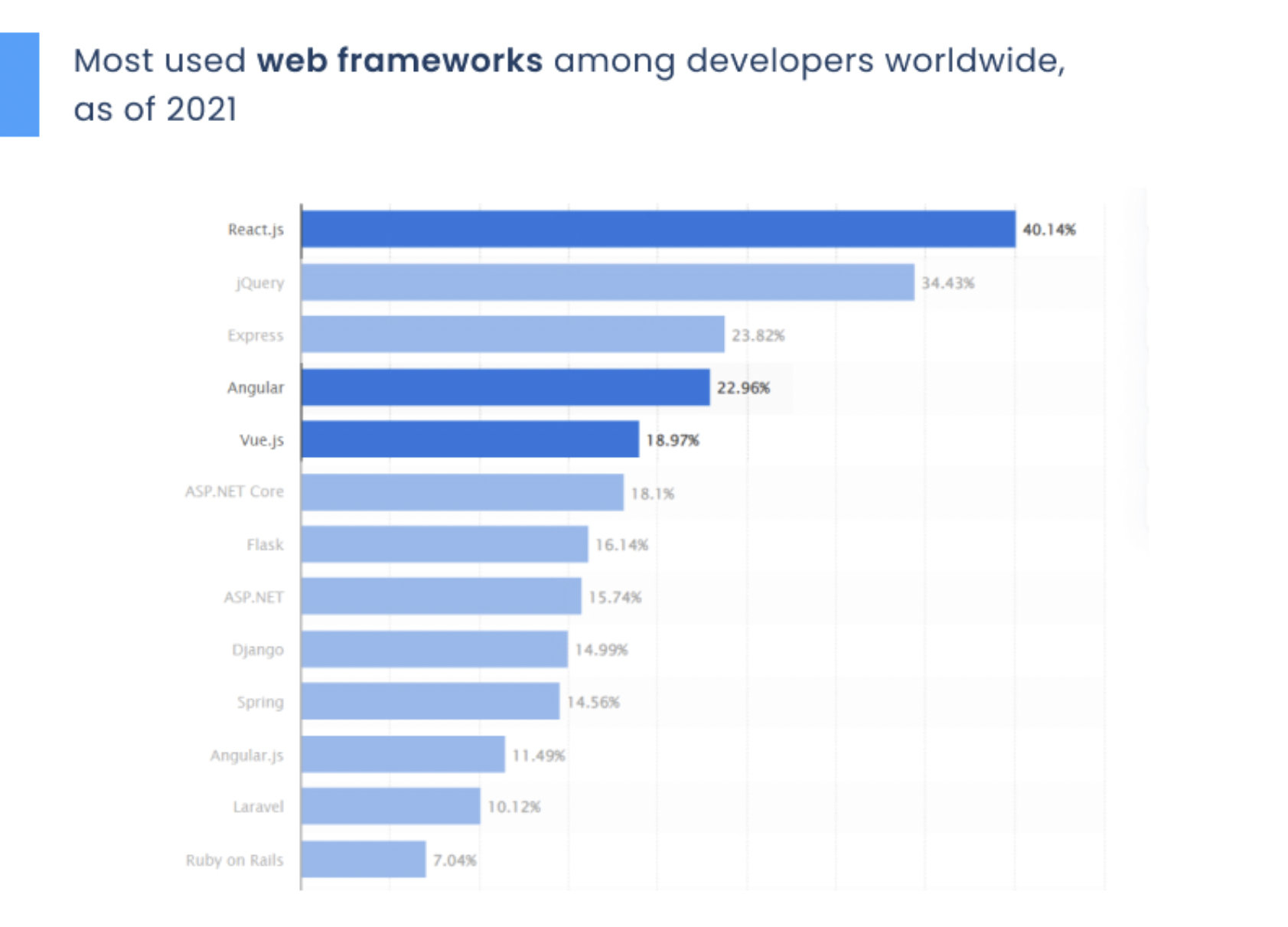 All web app development companies are debating on selecting the best tool for their JavaScript web applications worldwide. And that’s why we have devised a strategic comparison of “Angularjs vs Nodejs vs Reactjs vs Vuejs” to help them choose the best one.

So, in this blog, we will compare “Angularjs vs Nodejs vs Reactjs vs Vuejs’ ‘ based on different parameters giving you insights to choose either. We will see what sets them apart and how these tools are helpful in the software product development world.

Google launched its open-source client web framework called Angular in the year 2010. It was developed for Angular developers to solve the problems coming in the way of creating single-page applications and extending your web application’s HTML vocabulary.

Due to its extensibility feature, it can work well with other libraries. In addition, it has a large support community.

Why Should You Go for Angular Web App Development? 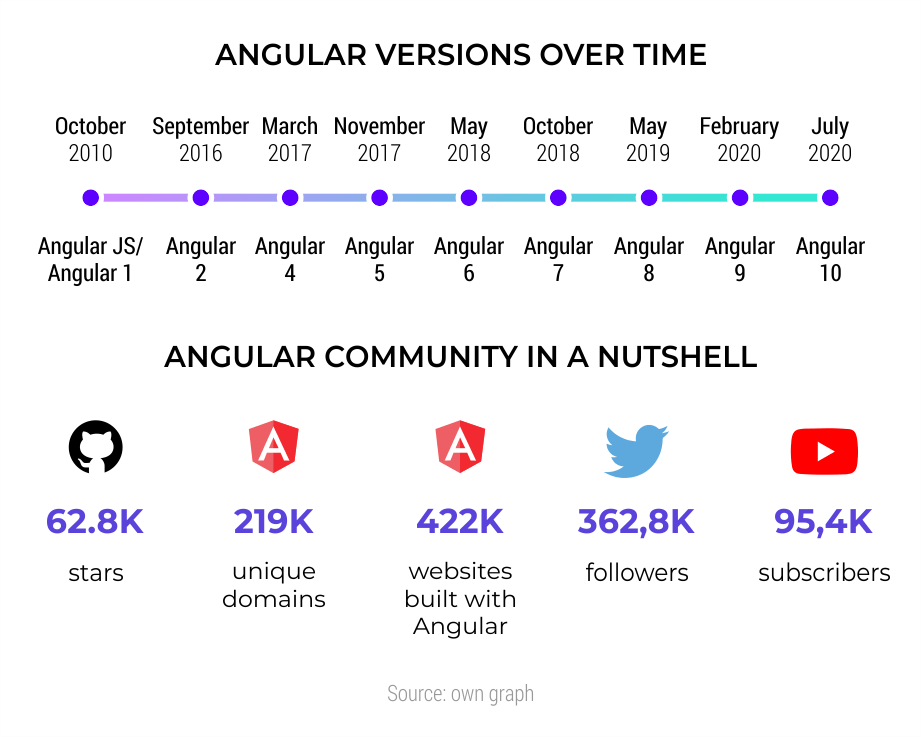 Some of The Major Benefits of Angular Web App Development:

React is considered an open-source library of JavaScript instead of a framework. It is mainly used to build unique user interfaces with a significant focus on rendering performance.

In the MVC architecture (model view driver), React depends more on “V.” It quickly gained a good reputation when first launched. It was built to solve problems in JavaScript frameworks related to the efficient provision of large data sets. 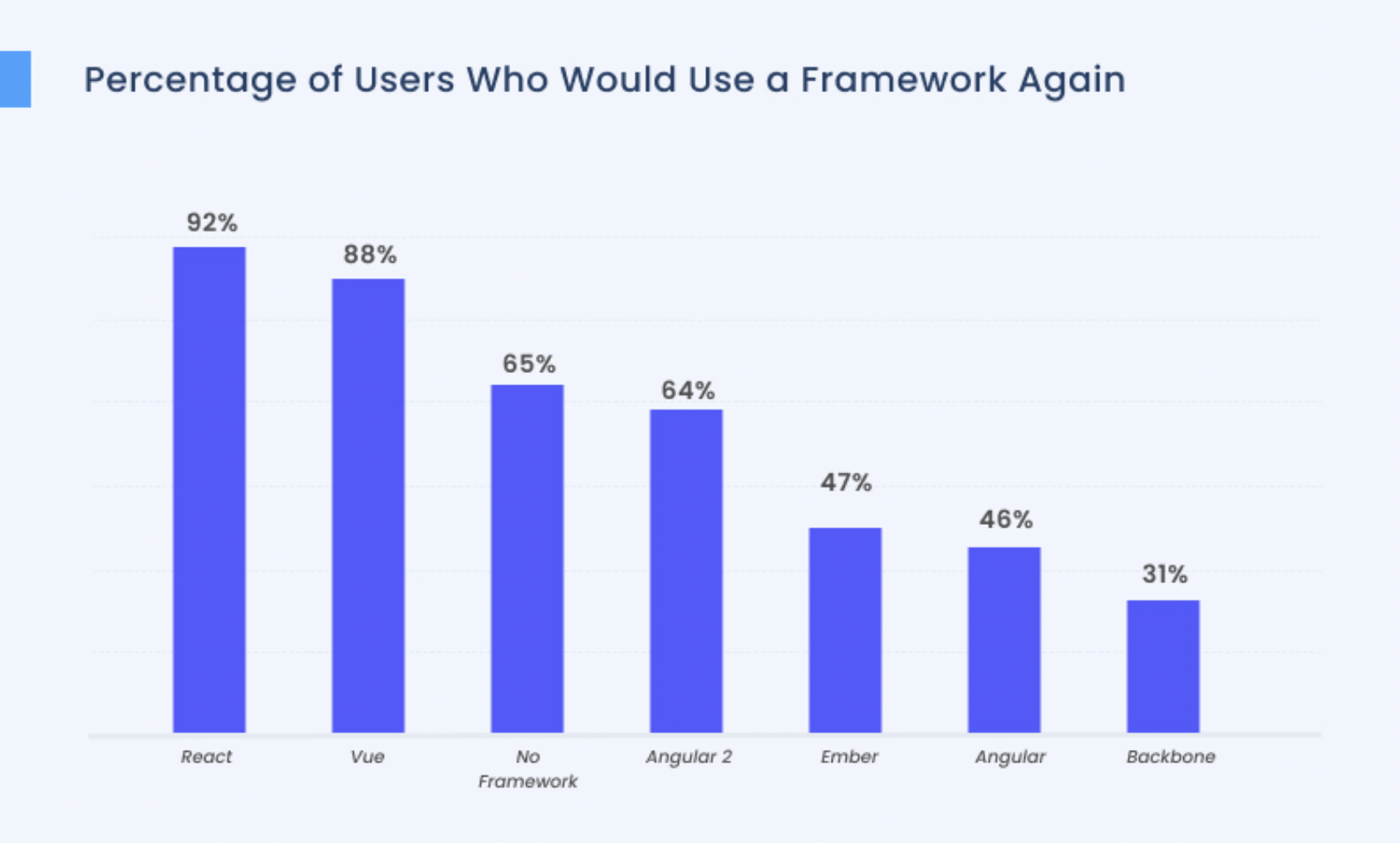 Why Should You Go for React Web App Development? 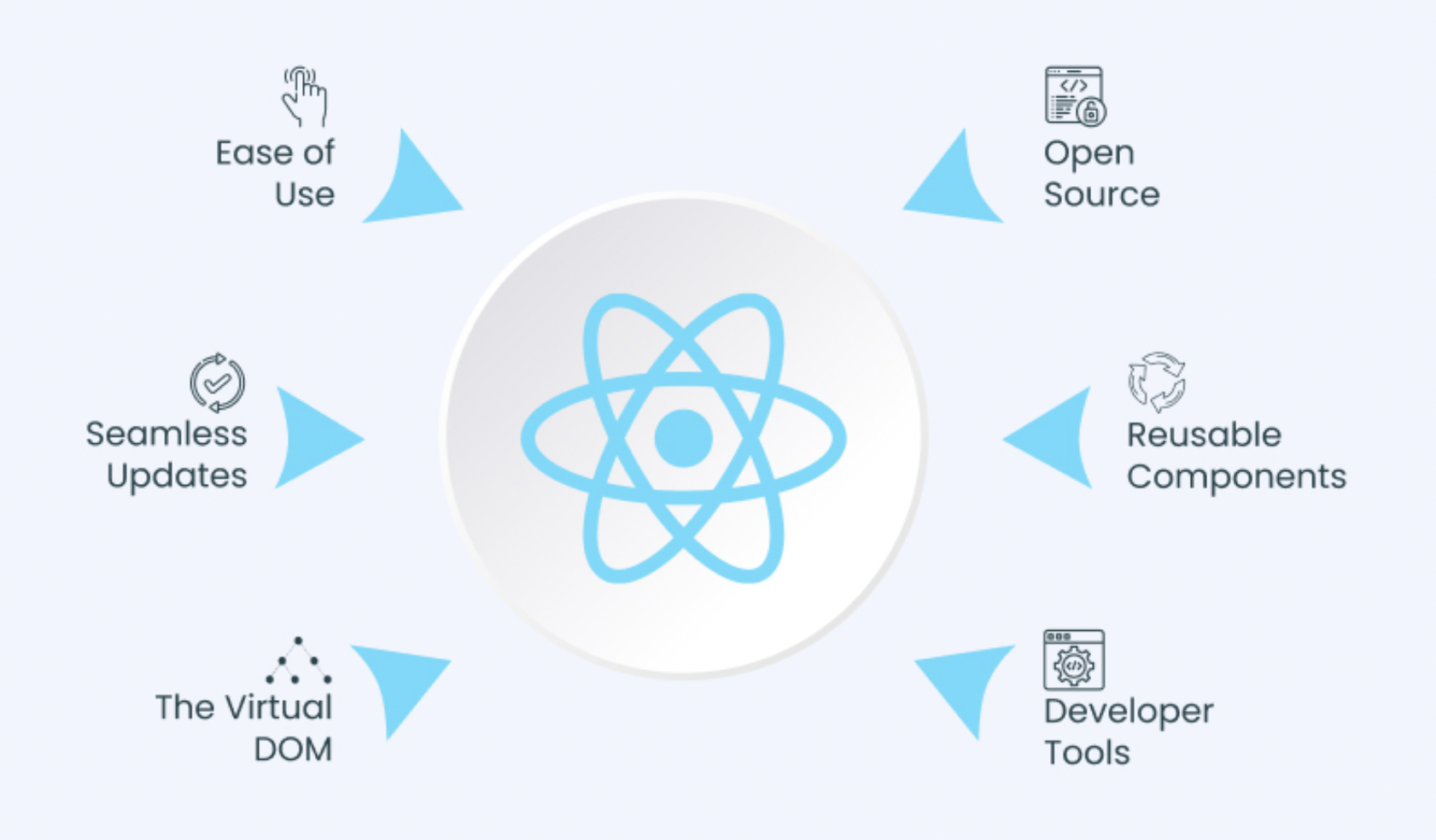 Some of The Major Benefits of React Web App Development:

Node.js can be considered a server instead of a framework that works with the Google Chrome V8 JavaScript engine. It comes with a callback concept to achieve the entirely new idea of single-threaded event-driven server programming and also runs JavaScript on the server-side. In addition, Node.js is mainly used to simplify the development of complex applications.

Node is generally used to build backend services that communicate with client-side applications. These applications receive and send data through a backend service called an API. The API serves as an interface between different programs so they can talk to each other. A web app and a mobile app can leverage the same API to store data, send emails, push notifications or initiate workflows on the server. 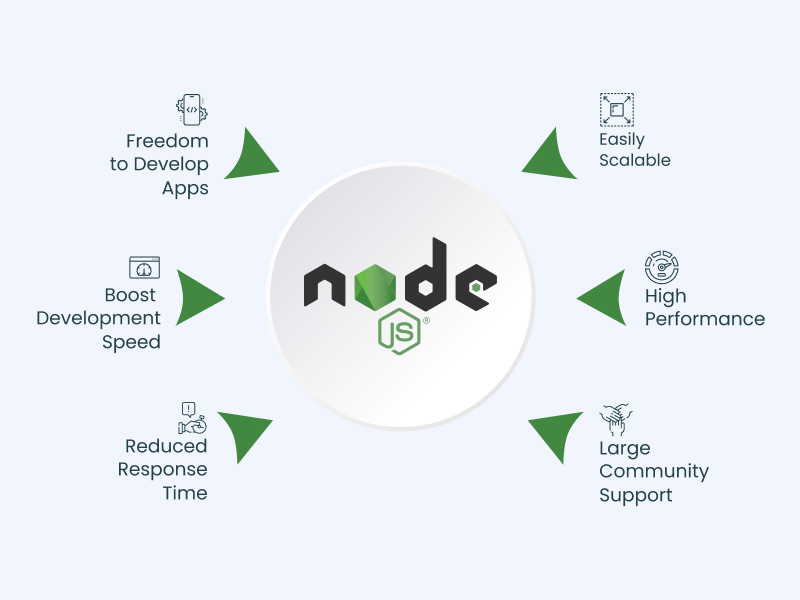 The API serves as an interface between different programs so they can talk to each other. A web app and a mobile app can leverage the same API to store data, send emails, push notifications or initiate workflows on the server.

Why Should You Go for Node.js Web App Development?

Considering how easily it gets the job done by integrating a 2-way client/server communication, it has become an ideal choice for web development companies to go with this one.

With workload distribution to multiple service providers and client requests, there is much from NodeJs to extract. If you want to generate the dynamic content of creating and reading/deleting files on servers with ease of data modification, choose NodeJs.

Here are Some of the Benefits of NodeJs Web App Development:

Vue.js mainly focuses on the view layer, enabling developers to integrate it into existing projects without hassle. Vue.js is a perfect choice for building single-page applications (SPA).

The first public version of Vue.js was released in 2014, and now it has been adopted by many big enterprises like IBM, GitLab, Adobe, etc. 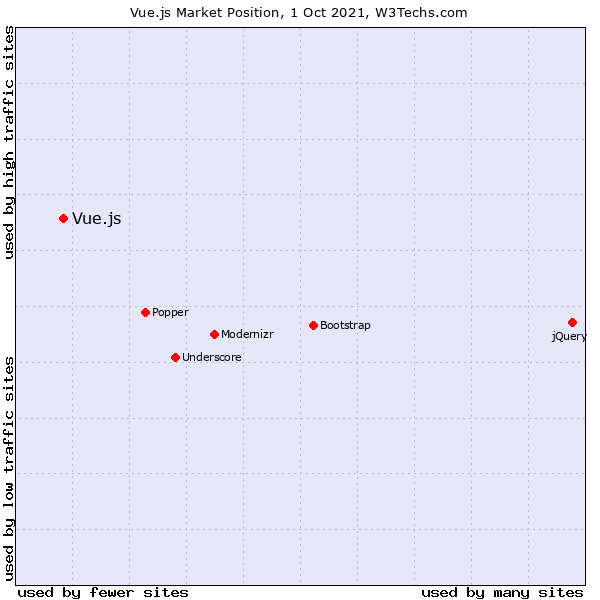 It provides developers with the capability to build with modern technologies. Vue.js has gained popularity due to its gentle learning curve and scalability. It can be used in single-page applications and small components in large websites.

Why Should You Go for Vue.js Web App Development?

Some of The Major Benefits of Vue.js Web App Development:

In the war of selecting the best JavaScript tool, it is not an easy decision for business owners. The proper selection of tools can take your business to new heights of success.

However, all four JS frameworks mentioned above are used worldwide, advanced and high performing. Depending on your business requirements and custom app development goals, you can choose any framework which suits you.

If you still have difficulty with any of these frameworks, you can consult us. For all your JavaScript web development services, we at PixelCrayons, have an efficient team of JavaScript developers who have successfully delivered more than 542 projects to 231+ happy clients across 15+ countries. So, feel free to contact us anytime!

The two Javascript libraries are two completely different frameworks and do not have one better than the other. They both offer similar features in terms of reusable components and virtual DOM.

However, regarding scalability, Vue js is significantly more performant. Vue js will also load in the users’ browser without any additional plugins or build tools in a manner that React can’t do.

Yes, Angular is suitable for web development. If you’re building a single-page app and hope to provide a high degree of interaction between pages – or if you need your pages to work together about 100% of the time – then I’d strongly recommend AngularJS over any other framework.

Q3. Which is better, Angular or Vuejs?

The better way to judge these two is through your preference. You may have different choices regarding syntax, learning curve, or libraries you are already familiar with.

Angular has a long history and wide adoption among developers. Presently, it is ranked as the most popular framework on GitHub. Angular’s syntax encourages an HTML approach to display data retrieved by the server-side application code running within the browser.

Vue offers a more simpliﬁed integration between JavaScript and HTML via its use of components to build user interfaces. It has multiple plugins for extended functionality written using Vue’s ﬂexible virtual DOM technology that utilizes data from either props or states without needing jQuery.

Q4. What are the advantages of Angular over other frameworks?

Angular is the only user interface framework that breaks through the JavaScript barrier by providing complete solutions for building modern user interfaces with HTML, CSS, and TypeScript. Angular delivers on this promise by making it easier to connect code to the UI with two-way data binding.

Angular is a front-end client-side Javascript framework developed by Google.

The Angular framework’s architecture simplifies large web applications’ development into smaller modules that share standard code and interact with each other through well-defined public interfaces instead of modifying shared global objects in multiple places.

Q6. What is so special about node js?

Node.js is a revolutionary open-source, cross-platform JavaScript runtime environment. It has been designed to rapidly develop scalable and complex applications event-driven.

One of the factors that make React more performant is its rendering. This is done by diffing the state of the DOM and comparing it to a new render. React also uses a virtual DOM to update only those pieces which have changed from the previous render.

React offers better performance than other frameworks by using a virtual DOM and how it handles adding and removing nodes for updates based on changes in data.

4 thoughts on “AngularJS vs React.js vs Node.js Vs Vue.js: Which Is the Right Framework for You?”