When deciding where to outsource software development, selecting an area with strong social and political stability and good internet infrastructure is essential. The United States, Canada, and the U.K. are all popular countries for software development.

I hope the above table gives you a clear idea of the best countries to outsource software development. However, do you know what exactly makes them ideal for software outsourcing?

Also Read – Outsourcing Software Development to India – Why it is the Preferred Centre for Outsourcing?

Following are the Critical Parameters when Shortlisting Best Countries for Outsourcing Software Development: 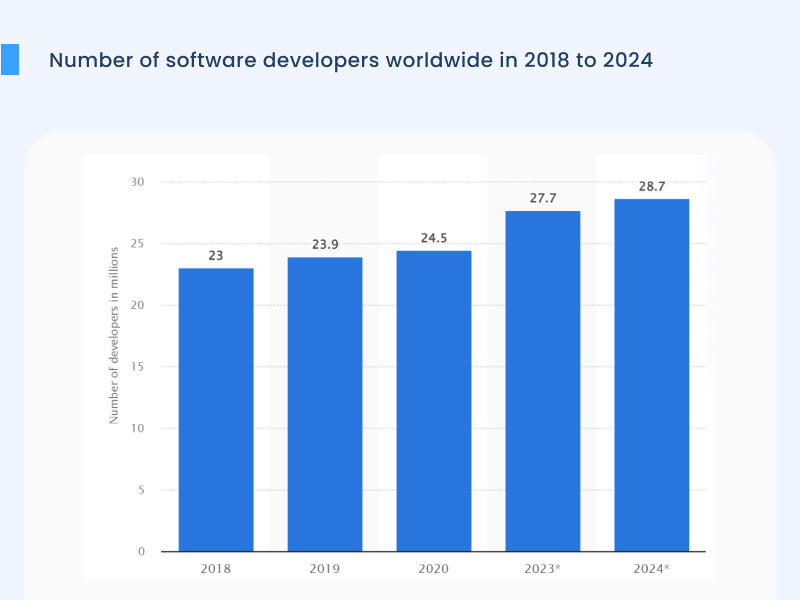 The more the number of developers, the greater the competition among them, which leads to higher salaries. So a good place for software development outsourcing would be India, with its large talent pool of programmers and low wages.

Second is China, which has a lot of talent and cheap labor, but not as much variety in terms of programming languages and software design methods. 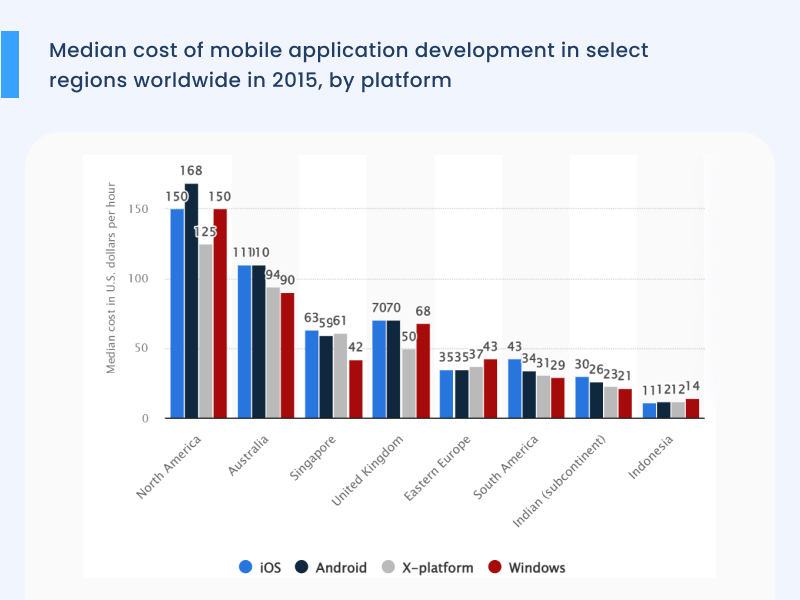 As software development projects can range from $20 to $200 per hour, it’s essential to find an hourly rate that fits your budget. 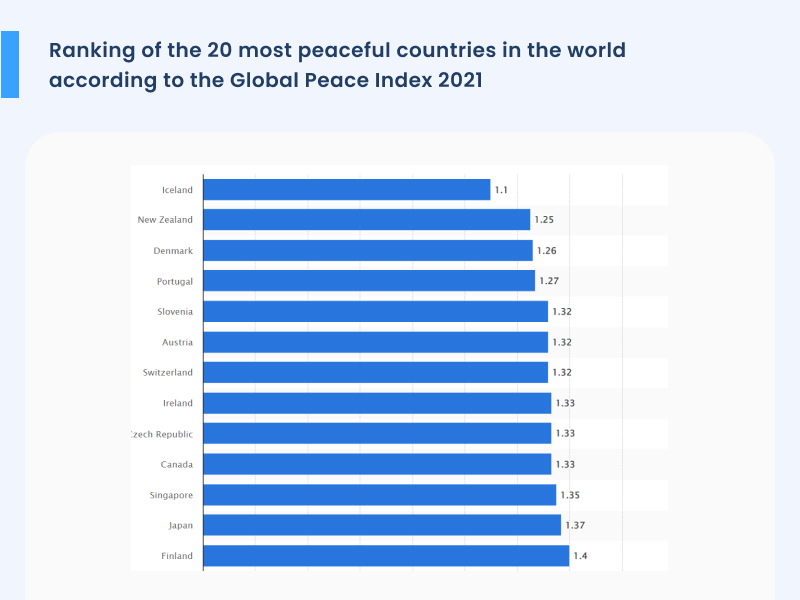 It is also crucial to find out how stable the country you’re thinking about outsourcing to is political since any political unrest could lead to interruptions in your project.

For example, Syria ranks 145th on the Economist Intelligence Unit’s Index of Democracy (on a scale from 1st ), so this might not be the best country for outsourcing software development work. 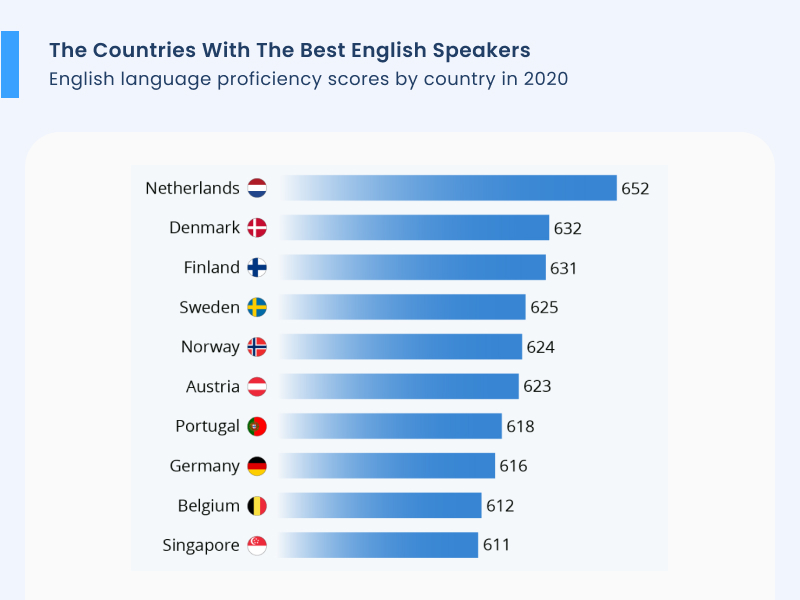 Source: Statista- The Nations with the Best English Speakers

English proficiency is fundamental when choosing where to send your outsourced software development work because these people will often work closely with someone from another culture or language that doesn’t speak their native tongue. 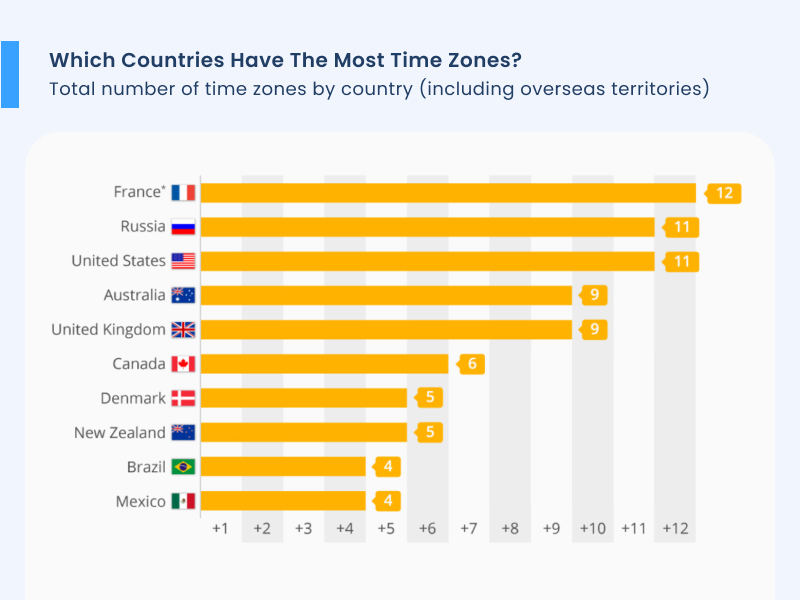 As mentioned earlier, communication plays a significant role in outsourced software development. So if you want to minimize the time difference between your team and the remote workforce, you’ll want to choose countries like Mexico (UTC -6) or Egypt (UTC +2).

Based on the Above Parameters, the Following are 12 of the Best Countries to Outsource Software Development:

India is number one in finding the best country for outsourcing software development. With a population of over 1.39 billion people, there are 5.8 million developers to choose from. That’s nearly double the number of developers in the United States. And Indian developers are well-educated, with 58% having a bachelor’s degree or higher.

The fantastic convenience with Indian developers is that you can hire them at a much more affordable rate. The standard rate for hiring software developers usually ranges from as low as $15 per hour to a maximum of $50 per hour. You also get a hold of a decent English-speaking community which adds a cherry on the top of the cake.

Also Read: Outsourcing Software Development to India – Why it is the preferred Centre for Outsourcing?

When finding the best countries for outsourcing software development, China is often at the top of the list. China is renowned for having some of the most advanced software programmers in the world. China is definitely worth considering when looking for a country that can provide high-quality software development services.

Many software development companies in China have a lot of experience and expertise in various industries. In addition, the cost of outsourcing software development to China is usually very competitive. According to various survey-based reports (including Statista) released in 2021, China accounts for approximately 68% of all outsourced work.

Ukraine is one of the top countries for outsourcing software development due to its high level of English proficiency. So, it’s easier for Ukrainian developers to understand the requirements of their foreign clients. It is crucial to consider compatibility with your culture to ensure seamless communication and collaboration to the project.

On the downside, Ukraine is currently politically unstable, which can lead to some instability to the project. Suppose you are looking for long-term engagement with the outsourcing partner. In that case, political stability becomes a driving factor as political change often leads to changes in law or policy that may affect your company.

Brazilian developers have a reputation for being very enthusiastic about learning new technologies. The nation has some excellent engineering schools that produce highly skilled graduates in coding languages like C++ or Java. However, this can also be seen as a negative since they might not be experienced enough in specific technologies or languages.

The excellent infrastructure makes Brazil an attractive destination for tech companies looking to expand their operations into Latin America. The nation is also on the verge of adopting Unified Communications and Cloud Computing, two areas where it is positioned to become a global leader.

5) Philippines – With Great English Fluency Among the Business People

Argentina is a great country to outsource software development for several reasons. One reason is that it has more excellent time zone compatibility with the United States and the United Kingdom than many other countries. So, communication and collaboration are more straightforward, which is critical for successful software development projects.

Argentina also has a large pool of highly skilled and experienced software developers. In addition, the cost of living and doing business in Argentina is relatively low compared to other developed countries. So, it’s an attractive option for companies looking to save money on software development costs.

Romania has a lower cost of living, so you can get more bang for your buck when hiring developers. The talent pool in Romania is bottomless. You’ll be able to find top-notch developers with the skills and experience you need to get the job done right.

And last but not least, the Romanian government offers several incentives for businesses that choose to outsource their software development here. So, if you’re looking for a cost-effective, high-quality option for outsourcing your software development, Romania should be at the top of your list!

If you’re looking for quality software development at an affordable price, Mexico should be at the top of your list. With a large pool of talented developers and a relatively low cost of living, Mexico is an attractive option for outsourcing software development. In addition, the country’s proximity to the United States makes it a convenient option for companies that must maintain close communication with their development team.

Mexico also has a growing economy and a stable political environment, making it an ideal business place. Thus, Mexico is a compelling option when looking for a country with all the right ingredients for outsourcing success.

Bulgaria is an excellent option if you’re looking for a country that can provide high-quality software development services at an affordable price. With a massive pool of highly skilled & educated workers, Bulgaria has the manpower to handle any project you throw their way.

Not to mention, the cost of living in Bulgaria is relatively low, which means your outsourcing budget will go further. Moreover, while English isn’t the first language spoken in Bulgaria, most software developers are fluent in it and can communicate effectively with clients worldwide.

Egypt has a large pool of software developers to choose from. The cost of living in Egypt is significantly lower than that of the U.S, so you get a significantly higher bang for your buck when outsourcing software development. The time difference between Egypt and most Western countries is not too significant, making it easier to coordinate work.

The Egyptian government is stable and business-friendly, providing a suitable environment for outsourcing software development. Egyptians and Westerners have many cultural similarities, making working together easier. The nation also has a robust infrastructure and telecommunications network, making it easy to outsource software development there.

Poland has a large pool of talented developers and a relatively low cost of living, making it an attractive destination for outsourcing. Additionally, the Polish government offers several incentives for businesses that outsource software development to the country. These incentives include tax breaks and access to funding. Poland is also home to several world-class universities, which produce highly skilled graduates ready to work in the outsourcing industry.

Poland’s proximity to Eastern Europe is unique on this list. Due to less distance, communication with programmers is more accessible and frequent than you would have if they were elsewhere. In addition, they can handle local customer service easily since most businesses are located nearby. In contrast to Eastern European countries like Ukraine and Romania, Poland has no regional language barriers.

Thai developers speak Thai and English fluently, so you will have little difficulty communicating about projects through either language. In addition, Thailand has an excellent educational system that produces talented engineers who can work on complex projects using multiple programming languages such as .NET, C++, C#, or Java, among others.

Thailand, as a nation for I.T. outsourcing, provides you with experienced programmers at reasonable rates. The country also has a high-quality education system producing top talent in the industry and is in proximity to some of the most populous nations in Asia. So, there is low latency internet connectivity. 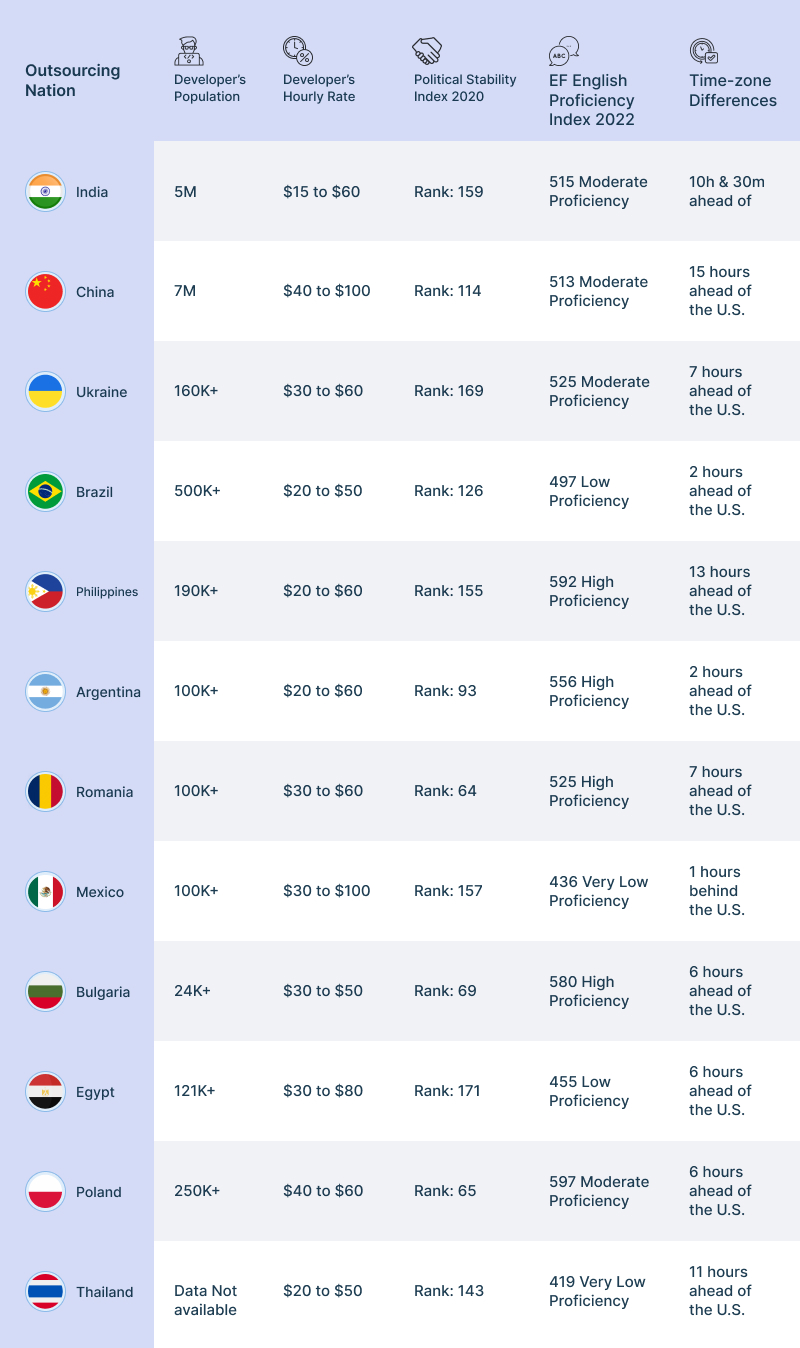 Undoubtedly, when it comes to outsourcing software development, there is no one-size-fits-all solution. The best country for your business depends on several factors, including the type of software you need to develop, your budget, and the timeline for your project.

While choosing an ideal nation is necessary, it’s equally crucial to go for the right software outsourcing company. After all, if you have outsourced your project to the wrong company, you may spend more money than if you had hired local developers in the first place.

We at PixelCrayons offer offshore outsourcing services spanning the entire software development spectrum. Choose from offshore application development, offshore UI/UX design, or any other offshore service that suits your needs.

An experienced team of professional software engineers provides excellent quality work with always met deadlines. Our customers can access top-notch quality control and competitive pricing to outsource their projects without breaking their budgets!