PixelCrayons Develops SimSim App and its Success is Doing Wonders 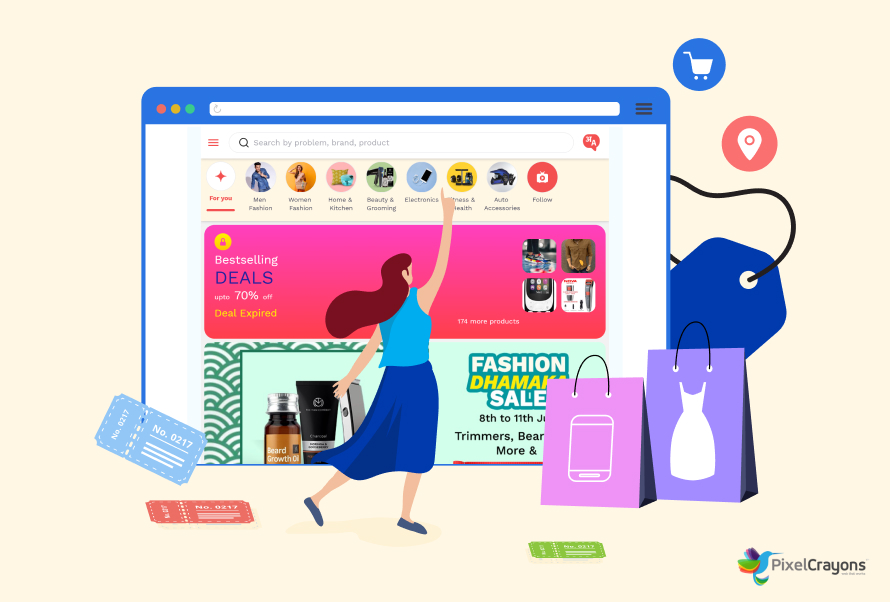 PixelCrayons recently created a trending shopping app called SimSim that lets you learn about shopping items with short and simple videos. The small videos available for each item in the sale offer a realistic look and feel to the target audience.

Hats off to the marketing agency for creating original and simple videos driving the eCommerce portal to unbridled success. However, do you know how this app is running multiple videos without any technical glitches?

React Native is the solution we chose for offering advanced rendering services on the SimSim app. The SimSim app currently has 5+ million downloads over the Android App store.

The smooth-running Video Shopping App has garnered an overall 4.1 rating over the mobile application store. With such high competition in the eCommerce industry where 80% of the businesses fail to survive, SimSim has successfully created its place in the hearts of shoppers.

What was the enterprise owner looking for in the SimSim app?

A smooth and intuitive user interface that offers a unique experience is the prime factor behind the success of any e-commerce app. The enterprise dealt in 16+ categories of products and wanted to offer a shopping experience that would please the audience over mobile and web platforms.

The concern of the SimSim enterprise was ensuring the uncompromised reach of the app and a user interface that maximizes the leads into conversion. Like any other eCommerce app, the client was also looking for an advanced search bar that complements the user search.

After hours of argy-bargy with the client, we deliberated to include multilingual capabilities over the app and the essential eCommerce features. With Indians as the app’s target audience, Hindi, Bengali, English, and Tamil were the chosen languages. Together these languages are spoken by 82.97% of the total population, as per the 2011 census.

As the SimSim enterprise was looking forward to maximizing the audience reach of the app, we suggested using a cross-platform framework for the video shopping app. It made the eCommerce app compatible with iOS, Android, and multiple web browsers.

The coding team performed in-depth research and analysis to ensure zero issues with the final outlook and performance of the video-based shopping app. Let’s look at some of the critical issues we faced while creating the SimSim app.

Compatibility with multiple OS was one of the crucial tasks of creating the SimSim app. The app caters to the developing nation, India. A significant chunk of the target audience in developing countries uses mobile phones with outdated operating system versions.

With research and analysis, our eCommerce development company realized that the app must be compatible with the latest and also the earlier Android versions starting from Marshmallow.

Another challenge with the SimSim app was to ensure the high-quality performance of the app. The app should offer high rendering services to users without any glitches while a user plays the video of the product on sale.

Our dedicated team of developers decided to go with React Native as it offers unmatched graphics-intensive features for the app. But, that’s not the sole reason behind opting for React Native for the video shopping app.

Why did we choose React Native for the SimSim app?

Here in the B2C eCommerce app, React Native offered a reusable codebase compatible with the earlier and latest OS versions. Code reusability significantly helped us in providing a faster marketing time for the video shopping app.

Moreover, the developed app offered a native app-like feel to both Android and iOS users. Together these two operating systems control more than 99% of the total app market worldwide.

React Native also offered higher flexibility in different sections of coding and testing of the cross-platform app. The hot reload feature of the framework favored creating a distinct and user-friendly interface for the app.

Kudos to our react native developers for their dynamism and hard work. 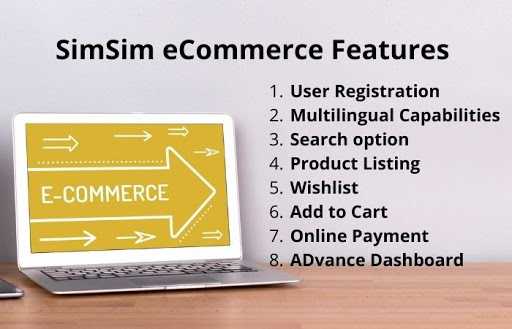 The app opens up with the unique SimSim logo and a sweet and simple message saying ‘Proudly Built in India‘. It complements the vision of the SimSim enterprise owner. The design of the app/website was created with optimum focus on blank or white space so that the user’s attention remains focused on the key products.

The following features were built and integrated into the video shopping SimSim app.

As per the trend, forcing a user to log in to the app right at the opening page is undesirable. It leads to a 35% reduction in the conversion. Similarly, asking too many queries affects the user experience.

So, for SimSim we allowed new users to either register using just their phone number or skip the registration part and continue surfing the app as a Guest. The app lets users fill up their name, email, sex, and other personal details whenever they feel like doing it.

Keeping the user interface in mind, we placed the language option at the right side of the search bar, enhancing its visibility. On opening the app first-time, you are asked the preferred language for the video preview of the shopping app.

The app’s search bar was created to ensure the most consistent results to the user resonating with the local keywords. The search bar is on the top of the app below, where users can easily access the product categories.

Unlike other eCommerce portals, the product listing page of SimSim displays the content in a short and quick video giving insights into the practical use and outlook of the items.

To enhance the app’s engaging nature, each product item is open to accepting comments. It offers a social media appeal to the video-based shopping app and also is significantly more fun for the users to try hands-on with the app.

Any item liked by the user can be placed under the Wishlist. The wishlist icon is accessible right at the bottom of the screen.

Like the wishlist, the Add to cart icon is also placed at the bottom of the screen, enhancing its user reach.

This app section allowed the marketing team to successfully upload the app with the latest product offers, revise and update the inventory stock, manage orders, etc.

The enterprise was looking for phenomenal success as an eCommerce platform in less time. While there’s still a lot to achieve via the mobile app, the SimSim app has garnered unbeatable praise and success over the Android App store and over preferred web browsers.

Apart from stunning success on the Android platform, the SimSim shopping platform is also accessible as a website. The B2C platform acts much like an app over the web portal.

Our Experience from the Project

It was challenging to create an eCommerce app that’s relatively simple in features and successfully thrills the target audience. Overall, the app proved successful with its natural native app-like performance over the two major operating systems Android & iOS.

Connect with PixelCrayons’ dedicated development team for the stunning success of your upcoming project.