Vue.js vs. React: Which is The Best Option for Growing Enterprises? In December 2022

If you’re planning to develop your next web application, you’ve most probably noticed by now that there are two major front-end frameworks in the market, React and Vue.js. In this blog, we will discuss Vue.js vs. React.

Web development projects using React & Vue.js projects have been around for several years. Both have become extremely popular among developers due to their versatility and productivity to businesses.

So which one should you choose? Let’s find out! The infographic table offers brief insights into the differences between Vue & React. 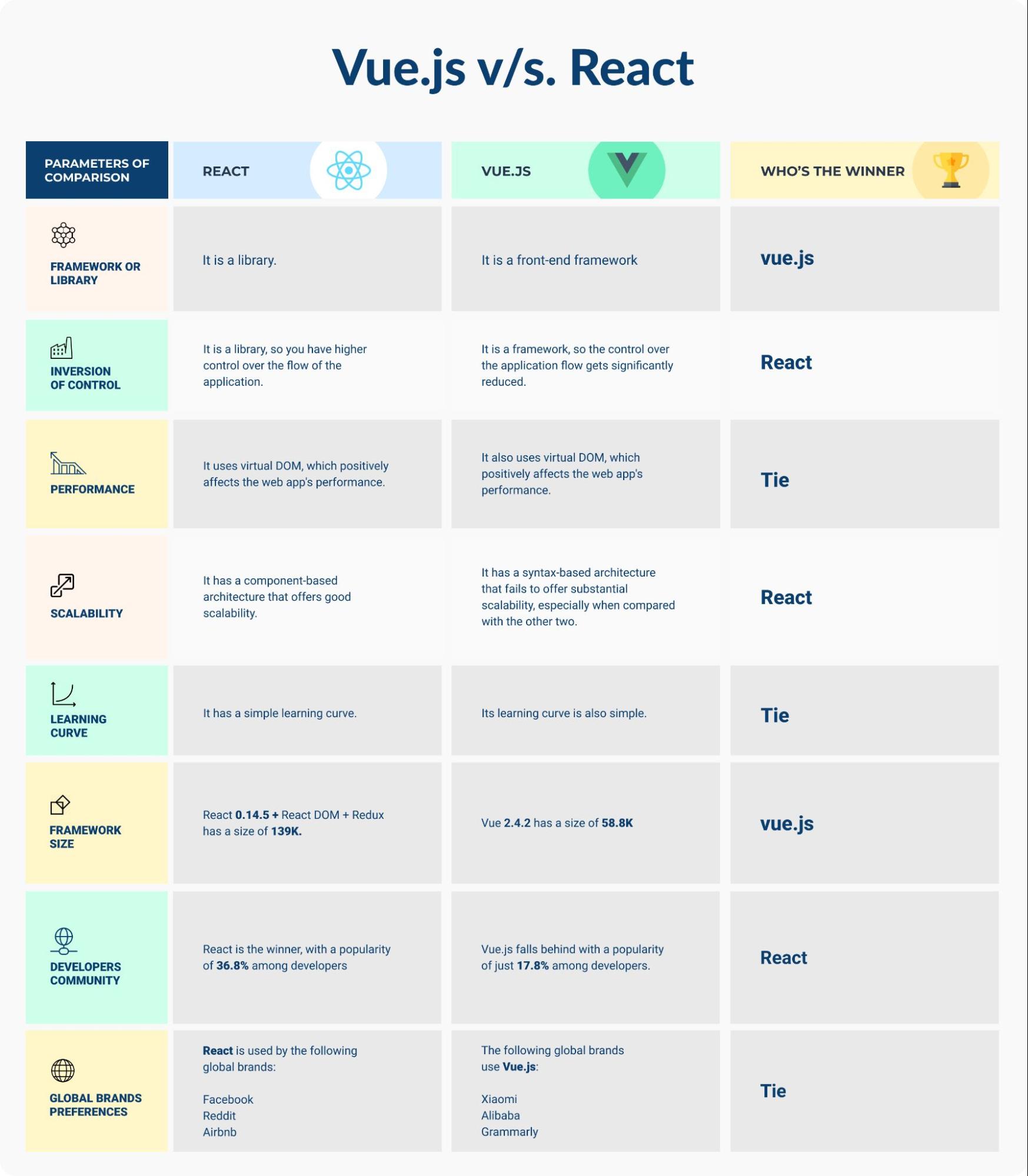 In this post, we will compare both Vue.js and React to help you select the best JavaScript web development framework based on the pros and cons of both frameworks, along with their respective market trends and usage statistics.

Is Vue better than React? Let’s find out in this video

Meta & Community with John Walker as the lead author built React on Facebook. With React it became feasible to create new & interactive user interfaces in much less time. It currently uses JavaScript, XML, or JSX, which helps in creating new UI components and debugging them with greater ease & convenience.

There are diverse reasons behind the popularity of Vue.js development services, and one of the most important is its ability to render again without any action. Therefore, it is a composable framework that will enable you to add features when required. It also allows the development of small, reusable, and robust components.

Some of the top companies usingVue.js are Xiaomi, Alibaba, Gitlab, Grammarly, and Adobe.

There are tons of similarities between these two frameworks and the notable ones include the following:

There are lots of differences between both the JavaScript frameworks.

Inversion of Control: Which One Offers More Freedom to the Development Team?

IOC is a software design principle where possession of a system’s flow of execution is inverted from a conventional default. At runtime, an object other than the controller has ultimate control over how to execute a method. This approach generally requires less code and can allow for more flexibility in handling different use cases.

It results in lesser development time, less code is written, and easier maintenance as every abstraction has been considered by the Vue.js core team’s members. Ultimately, the true winner depends upon whether you are willing to leave greater control over the chosen option or want to have tighter control over the flow of the application.

Scalability: Which One Ensures the Creation of Scalable Apps?

React has a component-based architecture, one of its most significant advantages besides simplicity. It also follows a one-way data flow from parent to child components. It’s worth mentioning that it doesn’t have default lifecycle methods like Vue.

Its core philosophy revolves around reusable and independent code pieces that get managed by their state and lifecycle (which makes them more secure). Developers can quickly render plain JavaScript objects or arrays with them, making it possible to mix various technologies like HTML5, CSS3, and even video without problems.

On the other hand, Vue follows a syntax-based architecture that reduces scalability and complexity but makes it harder to maintain in large projects since developers require more time and attention.

Development Time: Which One Ensures Quicker Development of the Project?

Frameworks help programmers write better code in less time. It allows programmers to devote time & energy toward improving other parts of their software, allowing it to run more efficiently overall. When developers use a framework, they can write logic directly to their app instead of coding structures from scratch.

React offers a much larger number of templates and development tools when compared with Vue.js. Thus, a developer can complete a project using react in much less time when compared to using Vue.js.

Framework Size: Which One Has a Lighter Footprint?

Both Vue and React are size-conscious libraries, but there are a couple of different reasons each might have a smaller footprint than the other. In many cases, using pure JavaScript may be an option that has less overhead than including additional tools (such as JSX in the case of React).

There’s no one-size-fits-all answer here — it depends on your use case and how you’re going to integrate any framework into your app. React 0.14.5 + React DOM + Redux has a size of 139K.

Popularity: Which One is Leading the Development Market?

If you’re just getting started with a web development project, there are many factors to consider when deciding which framework to choose. Developer communities and the number of jobs available are good indicators of popularity and demand. 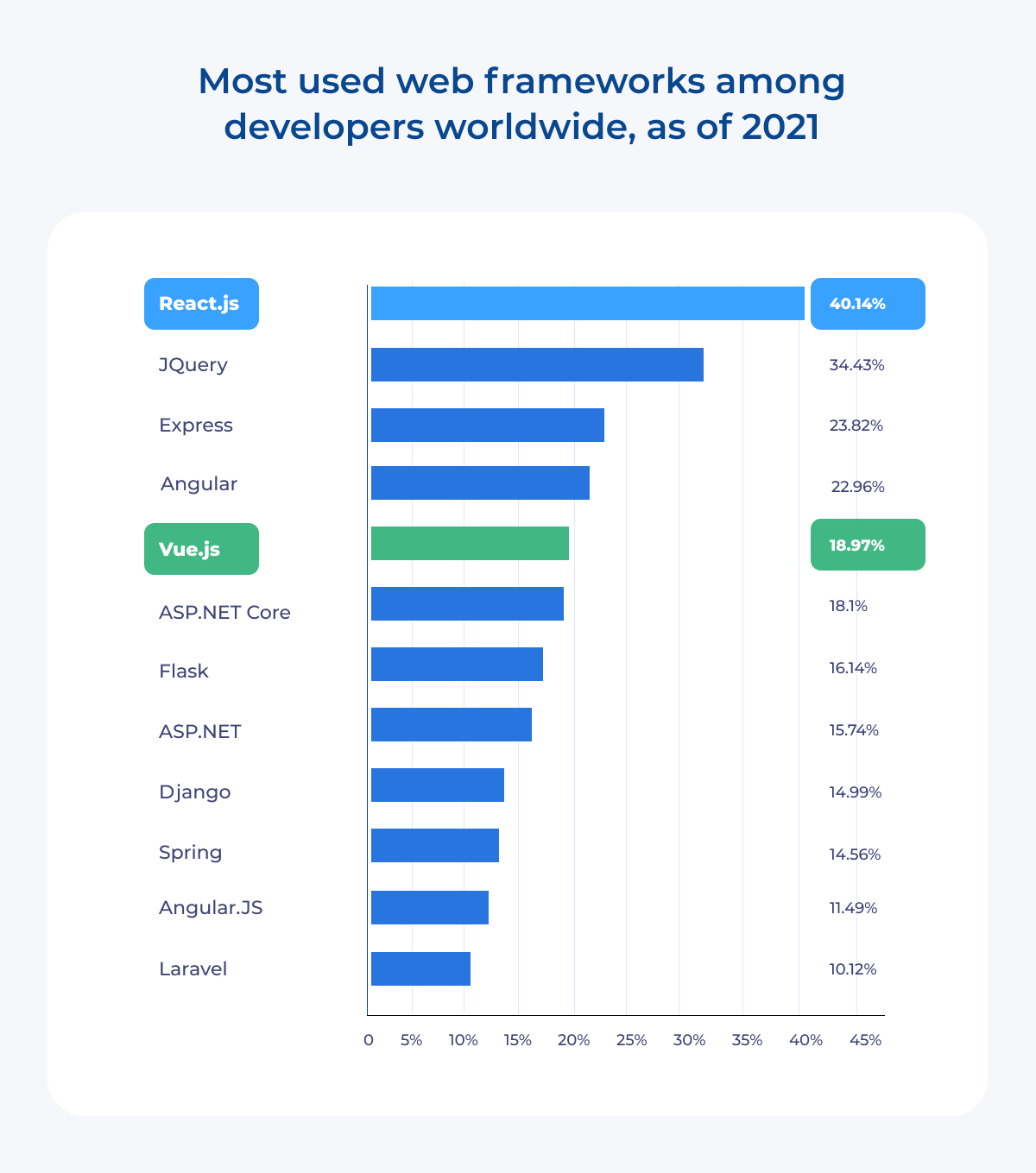 The differences between Vue.js and React can affect the ease of use or an organization’s ability to scale when their project grows in size. React is more prevalent among developers, with a likeability of 36.8%. On the other hand, Vue.js has a popularity of 17.8%, says Statista.

Development Cost: Which One Has a Lower Developer’s Hourly Rate?

It is a very tricky question, and it takes some time to go over different development firms before making a final decision. In general, you will find the average hourly rate of React developers is much higher than those of the Vue.js developers.

Note: The most important thing here is finding someone who will do their best to stick to their initial estimates and who won’t charge you any more than what they quoted at the start.

Whether you choose to work on React or VueJS, both the frameworks have significant differences between them, and the final decision gets highly based on the requirements of your project.

If you want to integrate JavaScript framework into your existing application, then Vue.js is the best choice. However, if you’re going to create new mobile apps using JavaScript, then React is the best option to choose.

You can hire React developers from PixelCrayons at an affordable hourly rate as well as experience tons of other benefits, like:

Question: What Factors Should I Consider While Choosing a Framework?

Answer: There are tons of factors that determine what constitutes an ideal framework. It depends on whether the chosen one resonates with the project demand effectively or lacks most.

Additionally, you can look for the following aspects of a framework:

Question: What are Some Other Alternatives to React & Vue.js?

Answer: The top 3 alternatives to these two frameworks includes the following:

AngularJS: The top benefit of using AngularJS is that it allows you to focus on your app’s functional elements instead of its presentation. You can then use directives and controllers to add behavior to elements and components, keeping them separate from each other in a meaningful way.

jQuery:  One of the top benefits of using jQuery is its massive popularity. If you’re looking to make your app accessible to more people, there’s no better option than picking a framework that others are already familiar with.

Express: It is straightforward and easy to use. However, it comes at a cost as you lose some control over your app’s functionality. Express includes several functionalities that most modern apps need, such as templating engines, predefined methods, and an integrated package manager.

Question: How Much Does It Cost to Hire a JS Developer?

Answer: It’s important to remember that time is more than just how long your JS developer takes to create something. If you are asking a consultant to work on your project, consider whether their time will cost more or less than paying someone hourly.