Go vs. Rust: Which One to Pick for Web Development in 2022

Go, and Rust is two prevalent programming languages that are also divergent. Go was created as an alternative to other mainstream languages such as Java, PHP, and Python. 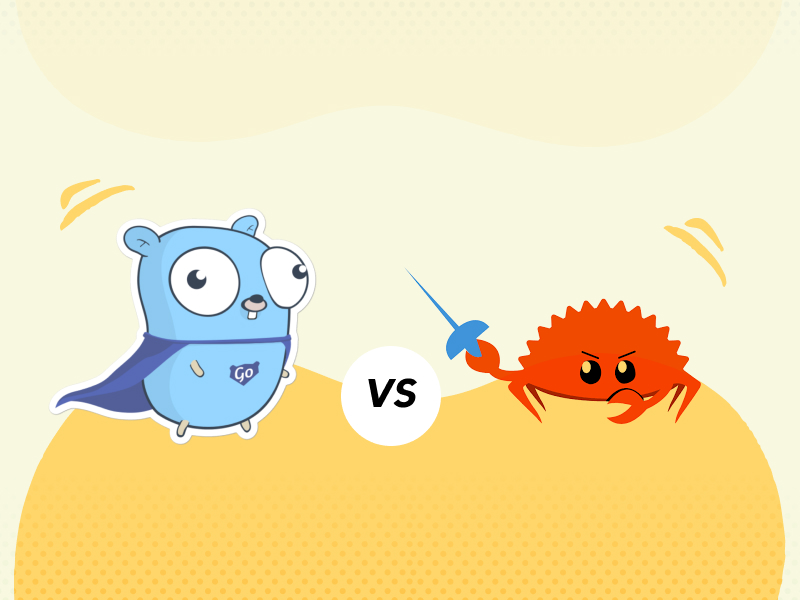 However, it’s not just another language trying to capitalize on the growing popularity of functional languages. Instead, it’s built to be much faster than those languages, thanks to native compilers and static linking.

On the other hand, Rust was designed with performance in mind, memory safety & speed. Unlike many other languages that sacrifice safety and security for performance, Rust offers an optimum combination of safety and performance.

So, why the comparison – Go vs. Rust?

Well, for starters, both are commendable programming languages, and as per Google Trends, both have become a hot piece of cake in the programming world. 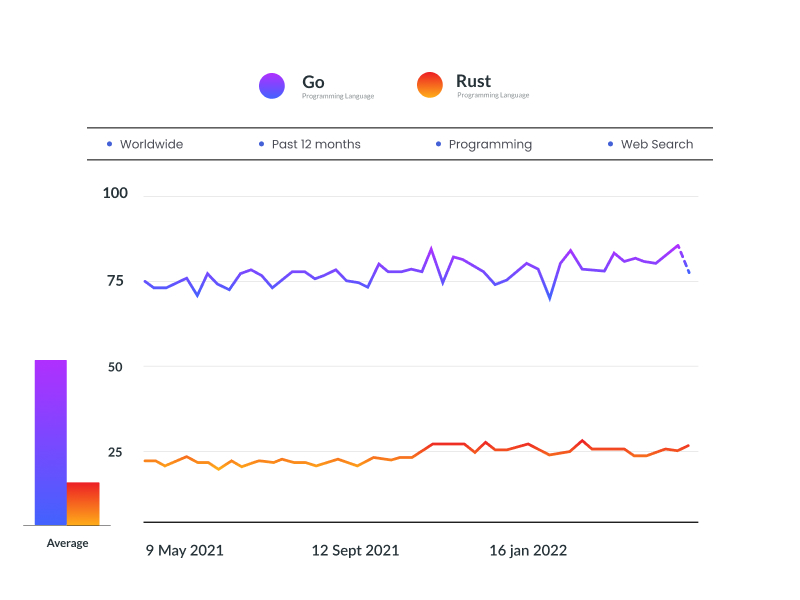 As part of a software development project, it’s critical to leverage the latest technology to ensure outstanding performance. Both Go and Rust are relatively new to the programming world and come with their unique set of benefits and drawbacks. So the query Go vs. Rust! It is, in fact, critical.

Go is four times as popular as Rust. However, popularity is the last thing to consider when choosing a project’s programming language.

Instead, there are tons of other things to focus on, like:

Let’s explore these aspects in detail, but before have a look at the infographic below, which gives you a quick summary of the entire article:

I hope you must have a clear idea of these two programming languages by now. Let’s explore these comparison metrics in detail.

1. Go vs. Rust – Analyzing the speed performance of the developed code 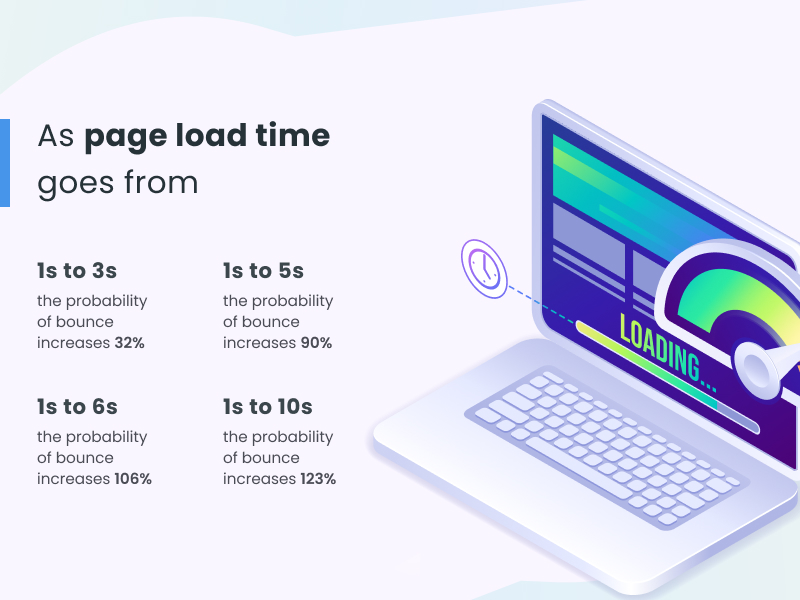 If a developer is picking up a new language, they might have heard some buzz about how fast it is. But what does that mean for an end-user or developer building apps with that programming language?

You can test the performance of different tools by checking out their respective benchmarks. For example, Go has its benchmark, and there are also plenty of comparative benchmarks across multiple languages that are worth browsing through when you’re comparing new platforms.

Go: Go is blazingly fast compared to languages like Java or C++. Go is one of the fastest languages out there. Due to being compiled, Go naturally outperforms other languages like Python, Java, etc., which are interpreted or use a virtual runtime. In addition, Go programs compile instantly and produce a tiny file.

Rust: It is a low-level programming language that runs blazingly fast and prevents software errors. When focussing specifically on the speed performance, Rust undoubtedly beats Go by a considerable margin.

Rust gets translated to a machine language for various systems, independent of external resources outside the system’s runtime. It means that all generated binaries can function efficiently. All of it makes Rust code both consistent and fast, which results in high performance.

So, the winner is Rust.

2. Go vs. Rust – Which one brings more features to the projects?

It is essential to analyze the key features offered by the two programming languages as it will help you find the one consistent with your requirements. The best way to do that is through their official websites.

Go, and Rust are both open-source and free, so you don’t have to worry about paying license fees. They also offer various tools for development, including IDEs and compilers.

Rust: Similarly, Rust comes with the following set of features:

So, Rust is the winner.

Go: It has a simple learning curve which makes it easy to get started. Moreover, it is also an open-source language which means that you can find help quickly if you get stuck. The community around Go is very active, and there are a lot of libraries available in case you need them.

Rust: It requires some knowledge about concepts like ownership and borrowing before developers can start using it properly. It makes Rust a potent language but at the cost of its complexity.

If you are looking for a more high-level language, Go is probably a better choice than Rust. Still, if the developers already have experience in lower-level languages, then Rust may be easier to get into.

It is also worth mentioning that Go uses memory maps while Rust uses LLVM backends. It means an extra layer of abstraction between what’s happening in memory and what happens when a program runs on Rust.

4. Go vs. Rust – Finding the one that offers smooth code maintenance

Go: Its tools, processes, and best practices make it easy to manage a large codebase over time. It supports internal documentation and automated testing that enable engineers across all disciplines—front-end, backend, operations, etc.—to develop new features in isolation and then deploy them effectively into production.

And because Go is open source—meaning that everyone can contribute bug fixes and improvements—thousands of contributors are continually improving Go as a language. Go is an excellent choice if you’re starting a new project or refactoring an existing codebase.

Rust: It fails to offer smooth code maintenance mainly because of its steep learning curve. The language has a lot of concepts that developers need to learn before they can even start writing applications in it. However, since its 1.0 release in 2015, there have been significant improvements in documentation and tooling that make Rust more approachable.

Also Read: Vue.js vs. React: Which is The Best Option for Growing Enterprises?

5. Go vs. Rust – Analyzing the level of security offered by these two languages 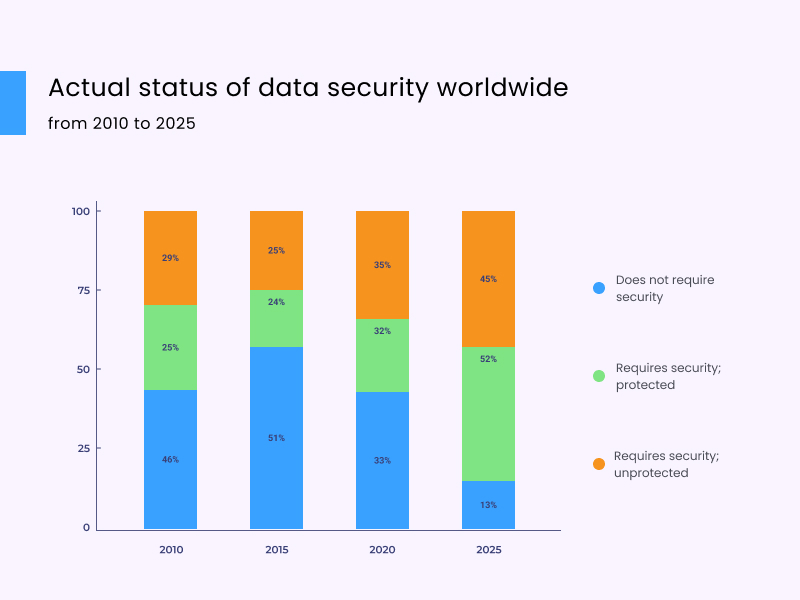 Go: The Go language does not offer memory safety or data ownership features. It’s a garbage-collected language. It comes with multiple security-based features like bounds checking on arrays, type switches, etc. However, it will be an error to conclude that the language is insecure.

However, in comparison, Go lacks behind Rust. Even though it is a garbage-collected language, it doesn’t do any memory safety checks like Rust does, making it less secure than Rust.

Rust: The most impressive thing about Rust is its memory safety feature, which makes it impossible to crash due to bad pointers or other memory management issues. Due to its memory, safety features can be used in applications like operating systems or network routers where security and reliability are paramount.

Rust also gives coders plenty of options when it comes to memory management. The ownership model lets you decide whether an object owns its data or not by marking each data type with either Copy or Move semantics.

In addition, Rust prevents segmentation faults by checking if variables are initialized before they’re used (which is called lifetime checking). When programmers try to leverage uninitialized variables, the program will fail at compile time rather than runtime.

6. Go vs. Rust – Which one has Mature Community Support? 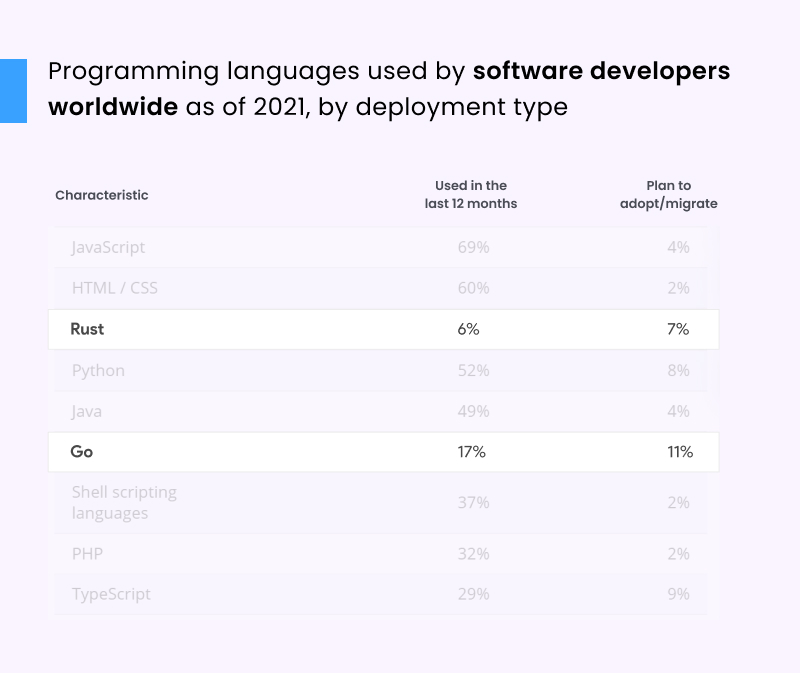 Go’s popularity makes it a little easier to find engineers who know it, but given Rust’s growth rate in recent years and its lower learning curve, Rust might be gaining some steam.

As per Statista, both languages are gaining momentum in terms of popularity. Notably, Statista offers valuable insights into the following two languages.

Go: 11% of developers in the survey say they plan to migrate to the Go language, and another 13% already used it in 2021.

Rust: 7% of developers in the survey say they plan to migrate to the Rust language, and another 6% already used it in 2021.

We can easily conclude from the above data that the Go language has a higher reach.

Go is always a good choice for beginners and experienced developers as well. You can hire Golang developers conveniently and ensure excellent project compatibility with this language.

That was all with the feature-centric comparison of Go vs. Rust. Let us now analyze these two languages based on their advantages & drawbacks.

Go (Golang) is a renowned open-source programming language that makes building simple, reliable, and efficient software easy. It combines the development speed of working in a high-level language with the performance and safety of a low-level language.

It’s fun to write, easy to read, and performs beautifully on servers and devices. Whether you are looking to build simple websites, next-generation microservices, or complex APIs – Go helps you achieve goals faster with less cost.

In simple words, its design emphasizes safety, speed, concurrency, and parallelism and has zero-cost abstractions and memory safety without a garbage collector.

Let’s take a glimpse at the pros & cons of Rust as an alternative to C, C++, and Go, among others.

Well, both outshine each other in specific aspects. Go language performs exceptionally well for,

We at PixelCrayons, suggest you hire a developer based on your specific project requirements.

No two projects are the same, so the choice depends upon the significant level of customization.

Answer: Experts are still skeptical about whether Go can replace Rust in future projects due to its limited memory safety guarantees. The true answer depends upon the project requirements, and there is no definite answer yet. However, it’s clear that both languages have their strengths and weaknesses, and so far, neither has managed to outdo the other wholly.

Answer: The language Go is swift. Compiled programs can execute as quickly as their counterparts in other languages, and because it doesn’t use an interpreter or VM, the runtime performance is much better. In addition, the compile time is fast, and the resulting binary is small.

Question: Is Go faster than Rust?

Answer: By contrast, Go prioritizes simplicity and will sacrifice some runtime performance. Yet, Go has an unbeatable build speed, which is critical for large codebases. In contrast, Rust is much faster than Go.