AngularJS vs ReactJS vs Vue.js 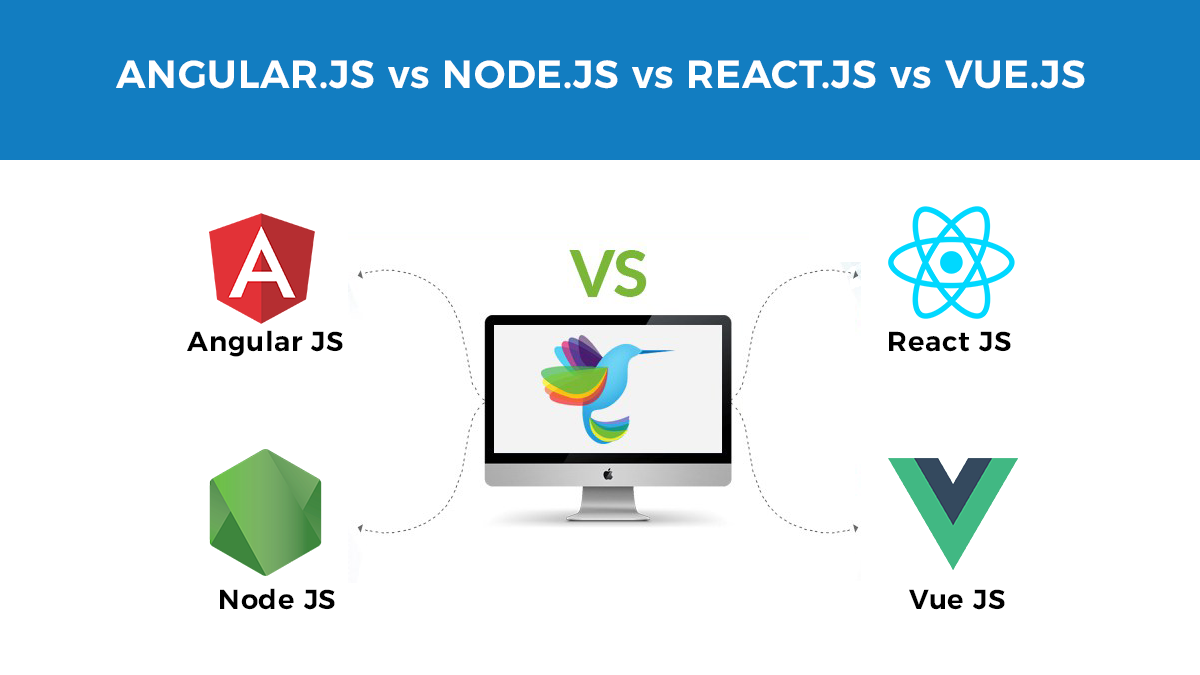 AngularJS vs ReactJS vs Vue.js

AngularJS or ReactJS or Vue.js: which is the best technology for custom web app development services? Which one should we choose for our business? These are the most common questions that are often asked by ISVs and SMEs while starting their projects. No doubt, JavaScript popularity has touched its peak after the arrival of Angular 5, React finest hours, all new Vue.js, Node.js upgraded version and much more. A highly competitive war among these JavaScript web app development tools is no more a big surprise these days. In fact, all web app development companies are debating across worldwide on selecting the best tool for their JavaScript web applications. This is the reason, we have come up with a strategic comparison on “AngularJS vs ReactJS vs Vue.js” to help them choose the best one.

In this blog, we will compare “AngularJS vs ReactJS vs Vue.js” based on different parameters, similarities, and differences among them. We are going to see what sets them apart and how these tools are useful in the software development world. So, let’s start.

AngularJS: AngularJS or Node.js or ReactJS or Vue.js

Google launched its open-source client web framework called AngularJS in the year 2009. It was developed for Angular developers with the aim of solving problems in the creation of single-page applications. Extend the HTML vocabulary for your web application. Due to its extensibility feature, it can work well with other libraries. In addition, it has a large support community.

Why Should You Go for AngularJS Web App Development?

– With Angular, its architecture allows automatic and easy data synchronization between the model view and the components.

– For dependencies, it consists of an inbuilt dependency injection subsystem. This is quicker and easier with which you can do fast Angular app development and testing.

– Angular templates are however the same as the traditional plain HTML. It also includes extended HTML terminologies that carry instructions for how to project the model into the view.

– In its initial development stages, it is made to be testable all the way up.

– Here, JavaScript controllers are responsible for the whole processing. However, Angular views are simple HTML pages.

Some of The Major Benefits of AngularJS Web App Development:

ReactJS: AngularJS or Node.js or ReactJS or Vue.js

ReactJS is considered to be an open-source library of JavaScript instead of a framework. It is mainly used to build amazing user interfaces with a great focus on rendering performance. In the MVC architecture (model view driver), React depends more on “V”. It has quickly gained a good reputation when it was first launched. It was built with the aim of solving problems in JavaScript frameworks related to the efficient provision of large data sets.

Why Should You Go for ReactJS Web App Development?

– It allows both servers as well as client-side rendering.

– It also allows the use of JS to write Native IOS applications.

– It maintains a virtual React DOM that randomly updates the parts that have been changed or those that must be updated.

– It provides a separate option for the creation of a pure JavaScript template.

– It seems easy for beginners as it comes with a small API. Thus they find it easy to learn and start using it.

Some of The Major Benefits of ReactJS Web App Development: 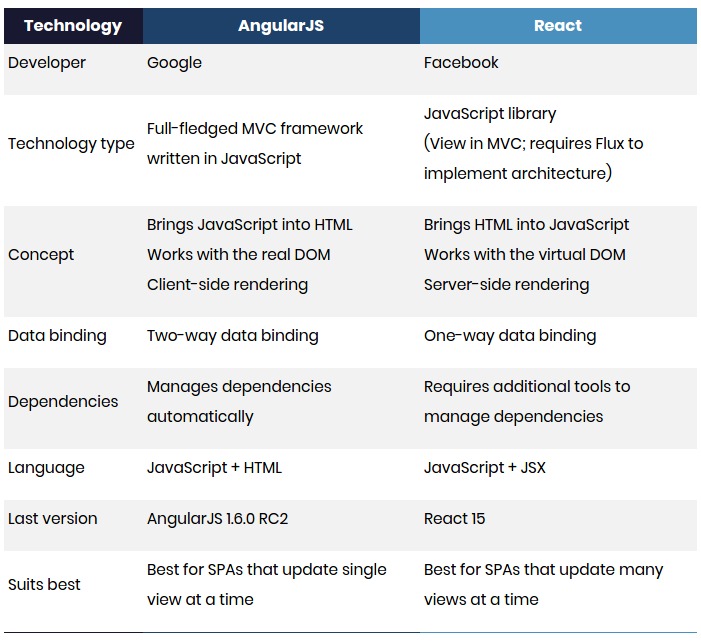 Node.js: AngularJS or Node.js or ReactJS or Vue.js

Node.js can be considered as a server in itself instead of a framework that works with the Google Chrome V8 JavaScript engine. It comes with a callback concept to achieve the entirely new idea of single-threaded event-driven server programming and also runs JavaScript on the server-side. In addition, Node.js is mainly used to simplify the development of complex applications.

Node is generally used to build backend services that communicate with client-side applications. These applications receive and send data through a backend service called an API. The API serves as an interface between different programs so they are able to talk to each other. A web app and a mobile app below can leverage the same API to store data, send emails, push notification or initiate workflows on the server.

Why Should You Go for Node.js Web App Development?

Considering how easily it gets the job done by integrating a 2-way client/server communication, it has become an ideal choice for web development companies to go with this one.

With the ability of workload distribution to multiple service providers and client requests, there is much from NodeJs to extract.

If you are looking to generate the dynamic content of creating and read/delete files on servers with ease of data modification, choose NodeJs.

Here are some of the benefits you get when you choose NodeJs:

– You can easily use Node.js for both front ends as well as backend development as it allows the use of the same JavaScript.

– Moreover, it allows its users to listen and reply to HTTP requests on the computer, listening to network traffic and access databases from the computer directly.

However, it has its downside in the world of app development. Check out the following points:

– Developers who use Node.js have to deal with excessive nested callbacks.

– Node.js uses an event-based approach to address implicit scalability. Node.js developers have to work with the asynchronous execution model which, compared to the linear blocking I / O programming method, requires more tasks.

– It doesn’t have a standard library due to which it sometimes translates to less seamless programming. The reason for this is that they lack important utilities which are generally provided in libraries.

– It also makes it harder for programmers to deal with concurrency since it is single-threaded.

Vue.js: AngularJS or Node.js or ReactJS or Vue.js

Vue.js mainly focus on the view layer, which enables developers to integrate it into the existing projects without any hassle. Vue.js is a perfect choice for building single-page applications (SPA).

The first public version of Vue.js was released back in 2014, and now it has been adopted by many big enterprises like IBM, GitLab, Adobe, etc.

It provides developers with the capability to build with modern technologies. Vue.js has gained a lot of popularity due to its gentle learning curve, and because of its scalability. It can be used in single-page applications as well as small components in large websites.

Why Should You Go for Vue.js Web App Development?

— It is easily adaptable and can be easily integrated with the big projects for front-end development without any difficulties. With no additional plugins and external libraries, VueJs helps to code robust apps. Moreover,  it offers the most consummate doc library developers will ever find, thus making their lives as well as the process of Vue.js mobile app development immensely easier.

– You can get things done faster with this. Due to its simple and easy coding, it leads to better maintainability of code which ultimately reduces bugs and eventually fewer developer hours in fixing bugs.

– It is very flexible as it can be used in any different environment. You can also add it to an existing project in a lot of technologies and can create components with it. Moreover, there is support for PWA’s that can be easily added or configured.

– It is very easy to set-up and faster than any other framework.

– It consists of detailed documentation which is so comprehensive that any users who have little knowledge of JavaScript and HTML can develop their own app.

– It provides developers easy integration with the existing applications. This is because it is based on JS framework.

Some of The Major Benefits of Vue.js Web App Development:

Conclusion:  AngularJS or Node.js or ReactJS or Vue.js

In the war of selecting the best JavaScript tool, it is not an easy decision for business owners. A right selection of tools can take your business to new heights of success. However, all the four JS frameworks mentioned above are used worldwide, advanced and high performing. Depending on your business requirements and custom app development goals, you can choose any framework which suits you.

If you still find any difficulty with any of these frameworks, then you can consult us. For all your JavaScript web app development service needs, we at PixelCrayons, have an efficient team of JavaScript developers who have successfully delivered more than 542 projects to 231+ happy clients across 15+ countries. Feel free to contact us anytime!

1 thought on “AngularJS vs ReactJS vs Vue.js”