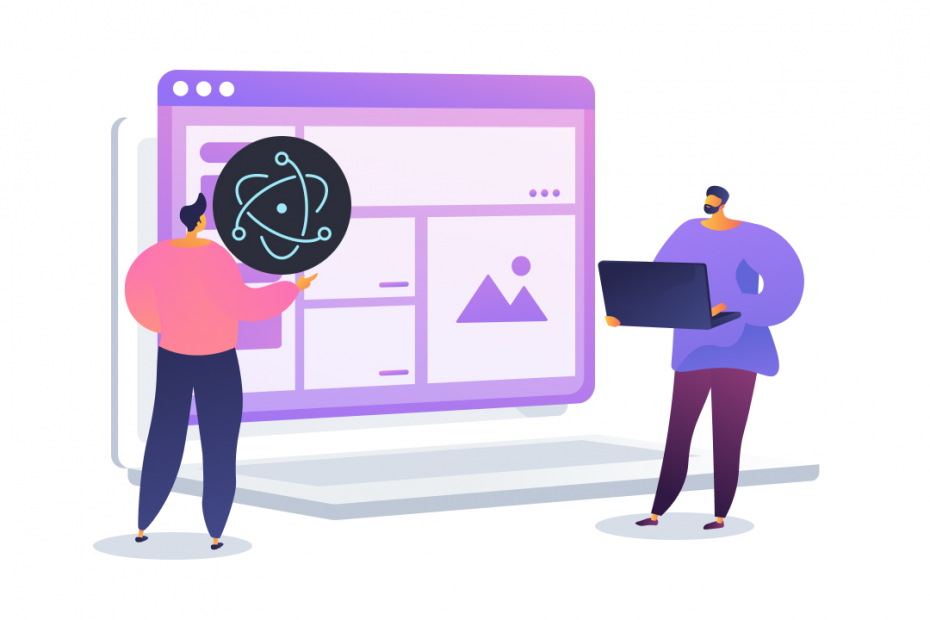 Many companies may feel that desktop applications are out of date, but what if I say this is a wrong opinion.

Consequently, each of these operating systems comes with its requirements and dependencies. As a result, they are developing the same application for multiple platforms. These codebases must, in turn, be maintained independently, and Electron aims to solve this problem.

Today, the development of hybrid or cross-platform desktop applications is made possible by ElectronJS. Most companies appreciate ElectronJS because of this specialty.

According to a development survey, desktop applications continue to be important for banking, travel, property, and the automotive industry.

Therefore, in this post, I will highlight the best ElectronJS applications available for Linux, Ubuntu, Windows, and macOS that might inspire you to develop one for your business.

ElectronJS in a Nutshell

Electron, also called Electron JS, is a software development framework for creating native applications (applications that run natively on Windows, macOS, and Linux) using web technologies, such as JavaScript, HTML, and CSS. ElectronJS itself is also open source and is maintained by GitHub and an active community of contributors worldwide. 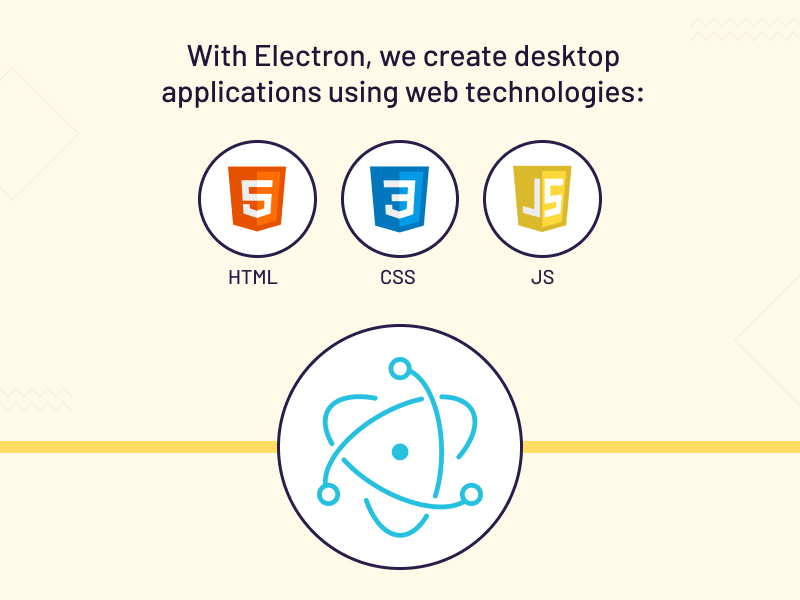 The first version of Electron was released in 2013 as the Atom Shell, and since then, the framework has been adopted by a host of desktop applications, many of which are open source.

Here are 5 popular Electron apps you’ve probably heard of at some point:

There are several reasons why businesses flock to ElectronJS and why their demand has grown steadily in recent years.

Let’s take a closer look at 5 things businesses love about ElectronJS to explain why it makes so much sense to use it for your next desktop app.

Why Should Your Business invest in an ElectronJS Desktop Application? 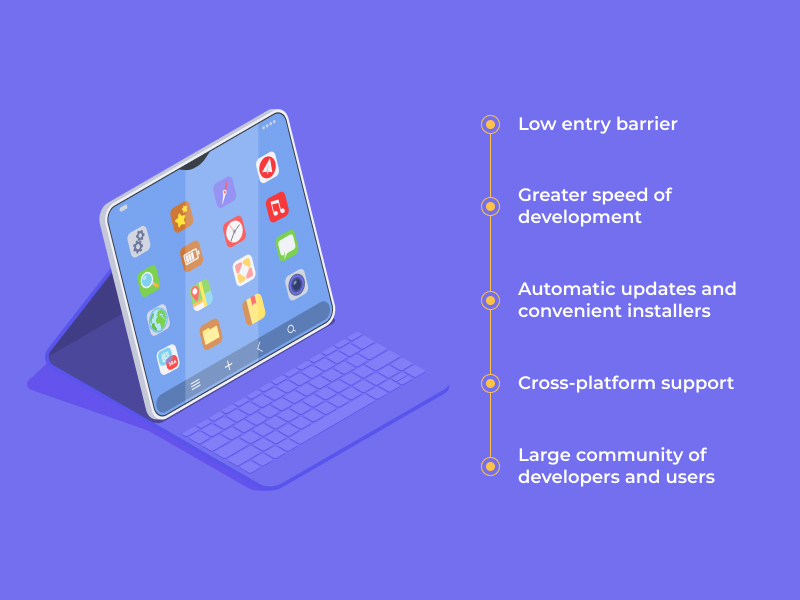 Professional developers are in extremely high demand these days, and it is estimated that the number of unfulfilled software development positions could exceed one million by 2022. That is especially bad news for anyone looking for quality software developers, especially if they also have a limited budget.

Since Electron uses JavaScript, HTML, CSS, and other web technologies, virtually all developers with web development skills can get started without much effort. And since web developers often charge less than software engineers, they are the perfect answer to the talent shortage for small and medium businesses.

In the past, it took a long time to develop even a relatively small desktop application because software developers had to write all of its parts from scratch, using low-level programming languages that provided minimal grip.

Because JavaScript code is interpreted line-by-line, developers can effortlessly debug and optimize it, allowing them to submit applications much faster than they could otherwise.

Mobile devices have changed what we expect apps to do. Rather than downloading updates from a website, users anticipate that applications will automatically update as soon as the latest version is released, preferably in the background. They also expect applications to be shipped as convenient installers that bundle all of the application’s components.

Electron desktop applications can be updated automatically. Thanks to the auto-updater component.

Creating convenient installers for Electron desktop applications takes very little time thanks to electron-builder, a complete solution for packaging and building a distribution-ready Electron application for macOS, Windows, and Linux.

When you write an Electron application, you can be sure that it will run on all major desktop operating systems, including Windows, macOS, and Linux.

Many different OS integrations are supported out of the box, such as native OS menu bars, notification tray applets, multimedia keys, and more, saving developers a considerable amount of time.

This is also why they consume much more memory than desktop applications written in other programming languages which is why you must hire software developer in India for professional results.

#5 Large community of developers and users

Electron is a massive open-source project whose reach spans the world. There are thriving Electron user and developer communities everywhere, producing a wealth of educational resources and development tools.

Perhaps because Electron has such a low barrier to entry, Electron communities tend to be extremely welcoming to newcomers and never punish their members for asking questions and being curious. 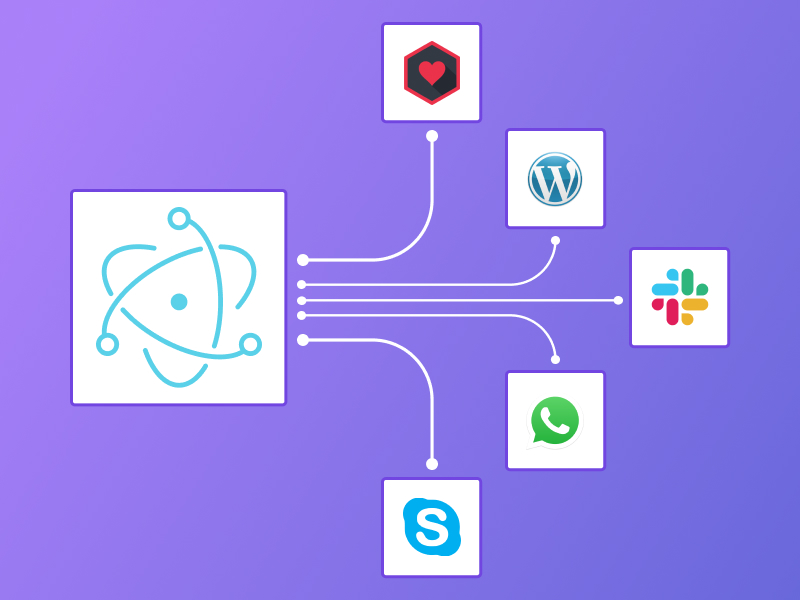 Let’s go over some popular ElectronJS apps. I’m sure you all know about these apps, and many of you use them daily.

Everyone knows what a torrent is. Torrent files are files that people can exchange through a peer-to-peer connection. Users store files on their computers or mobile devices, and the more people keep a file, the faster the download speed. This is the first example of the ElectronJS application.

The WebTorrent application was built using ElectronJS and other JavaScript tools and uses WebRTC technology for peer-to-peer connection. WebTorrent Desktop was built for three leading platforms: macOS, Linux, and Windows. Connect the application to all popular BitTorrent and WebTorrent networks.

WordPress is a popular content management system used to edit and manage a website. In addition to a web version, a desktop application was also created with ElectronJS. This was sent on a few other platforms at the same time. Therefore, MacOS users or Windows users can use the WordPress dashboard without distraction or hassle, using the WordPress functions to the fullest.

With the help of ElectronJS, the WordPress desktop app is loading fast on all platforms. In addition to ElectronJS, the React library was also used to provide a fascinating user experience.

Slack is a corporate messaging application that employees widely use in companies of any size. It allows you to create private channels, exchange messages personally, have your hosting, etc. The slack desktop app is designed for all popular operating systems like macOS, Windows, Linux. Also, Android and iOS mobile apps are available.

WhatsApp is considered one of the most popular messaging applications in the world. You can make voice and video calls, send text messages, share contacts, images, etc. It has a particular feature: WhatsApp offers self-destruction of messages after a certain period. The WhatsApp desktop is available for macOS and Windows, but it does not have an official desktop version for Linux.

Last but not least, the ElectronJS app on our list is Skype Messenger, which is also very popular. It allows voice and video calls, sends messages, and makes paid calls to ordinary landlines and mobiles. The desktop version is available on all platforms: Windows, macOS, Linux.

Of course, these five popular ElectronJS-based desktops aren’t the only ones to consider. There are many other applications that you can take inspiration from for your business. But these are the best ElectronJS apps.

Electron is a progressive software development framework that has brought us several standout desktop apps, including Atom, Discord, Skype, Slack, WordPress, and Etcher, just to name a few.

The reasons why professional Electron JS developers enjoy using it include its low barrier to entry, its fast development speed, automatic updates, and convenient installers, cross-platform support, and its large community of developers and users.

If you also find ElectronJS useful for your business, then the next smart step would be to hire electron js developers in India.