Guide to Build a Video Conferencing App Like Zoom Read in this post, Video conferencing with a large group of people is not only a corporate need, but it is also a need for ordinary people, at least in times of global crisis. 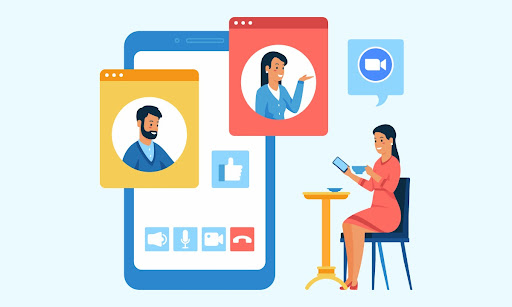 We have repeatedly heard one app since nations worldwide responded to the pandemic by implementing lockdowns. Zoom is on everyone’s toolkit as the world opens up to new ways of doing things.

Many companies are attempting to adjust their operations by allowing their staff to work from home, which has resulted in a surge in Zoom’s popularity.

According to reports, the popular video conferencing app “Zoom” garnered more than 2.5 million users in the first quarter of 2020, and a slew of corporations around the world have embraced this video-first culture, with the market for video conferencing expected to reach $20 billion by 2024. 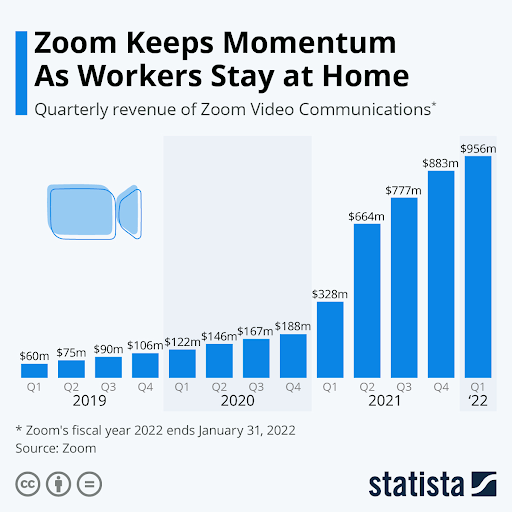 There are many reasons why people love this app so much, but what about people who are new to the world of tech? If you’re looking to develop your own video conferencing app like Zoom, here’s everything you need to know!

Why Should You Create a Video Chat App Like Zoom?

The following are three primary reasons why developing a video conferencing app like Zoom is a billion-dollar idea:

The video conferencing market is capable of assisting you in the development of your application. As per Global Market Insights, the market value of video chat apps would approach $50 billion by 2026.

Video chat apps are growing increasingly popular across all professions due to the COVID-19 pandemic and the postponement of countless social meetings. It will increase the popularity of video conferencing in the long run. 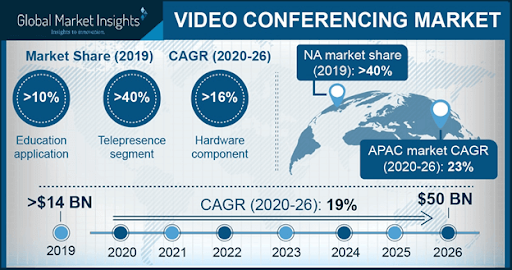 2. There is Plenty of Room to Grow and Flourish.

Video chat apps aren’t just for enterprises. According to a survey, only the education business owns more than 10% of the video conferencing market shares.

Because educational institutions are closed or only allow a restricted number of students to attend, these players have more excellent opportunities to enter the business and grow.

Nowadays, people rely on technology to help them with procedures, work, and stay in touch with their loved ones throughout the lockdown.

According to Statista, the downloads of video conferencing apps like Zoom increased by more than 100% in March 2020. It demonstrates why video chat apps are becoming more popular and why you should invest in this market. 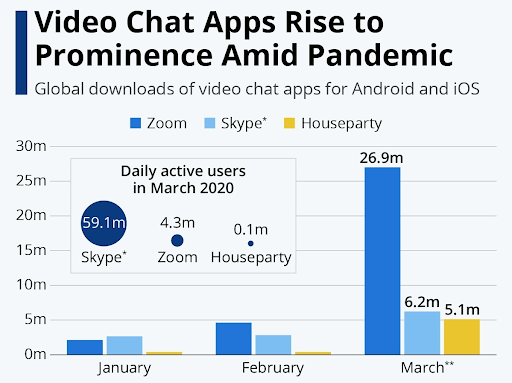 Top Companies that Use Zoom

These are some of the businesses that have integrated or utilized Zoom into their technology stack. 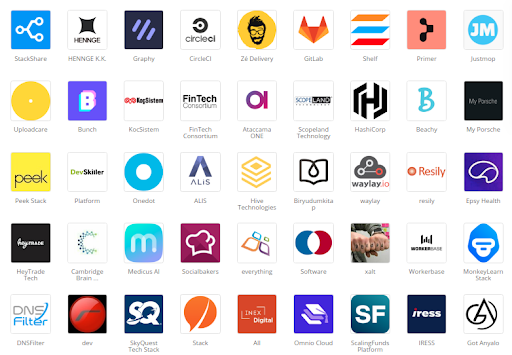 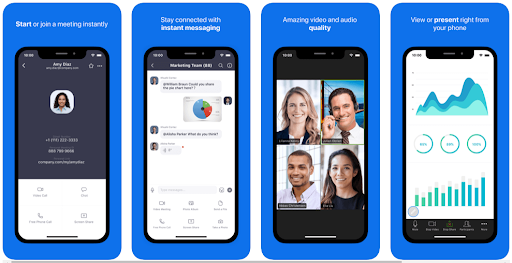 You’ll need to create a list of features and functionalities that will be highlighted in your application.

The requirements of your application and the financial allocations will determine a lot. Here’s a list of features that should be included in your video-conferencing app.

Allow users to verify the camera before joining a video call in your app. Allow them to turn off the video if they want to.

While the video is a must for online meeting apps like Zoom, you should also provide a chat function as an additional communication channel that users may use throughout a session.

Users will only utilize an online meeting app if it permits more than two people to participate in the call. Creating a multi-party conference feature is a challenging endeavor, but it is the main feature of any video-conferencing platform.

Allowing more than ten users to join the call will necessitate enough backend support and reinforcements to ensure that the program runs effectively.

A feature that allows users to share files during an online meeting is useful when designing a Zoom clone application. However, it would be best to guarantee that the app provides a safe environment for storing and transporting these files.

Integrating a desktop sharing capability is a crucial feature that comes in useful when users join from remote work locations and want to share the information of their displays during an online meeting.

And this is especially handy when technical assistance is required, and an expert can assist users in completing a specific activity.

For a variety of reasons, recording an online meeting can be beneficial. However, if you decide to offer this service, ensure that you also provide storage for the recordings.

You may also provide the user the option of saving the recording to the cloud or locally on their device. It would be best if you also considered security measures to prevent unauthorized people from gaining access.

Suppose your Zoom clone software is intended to be used casually. In that case, a feature that allows users to add hilarious filters and icons during a call can attract a more extensive user base.

Even if your target market is predominantly a business audience, more private calls will be initiated.

Live streaming has grown highly popular as a result of social media. It enables a single user to broadcast voice, video, or both to a specific group in real-time.

From a business context, it can aid the government in gaining access to disaster zones or rescue missions by live streaming conferences and meetings to a big audience.

Having a virtual hand-raising feature during an online meeting, especially when there are many participants, allows users to express their desire to speak or voice concern by signaling to the host.

It is commonly done by using a virtual emoji that looks like a raised hand. This feature prohibits numerous people from speaking at the same time, ensuring that the meeting runs well.

The meeting host uses the ‘Mute Participants’ option to guarantee that users do not talk out of turn. According to the host’s wishes, this mutes the mic of one or more of the online meeting participants.

What is the Technology Stack for a Video Conferencing App?

After you’ve gone through the list of features, you’ll need to learn how to make an app like Zoom. Below is the proposed technological stack. 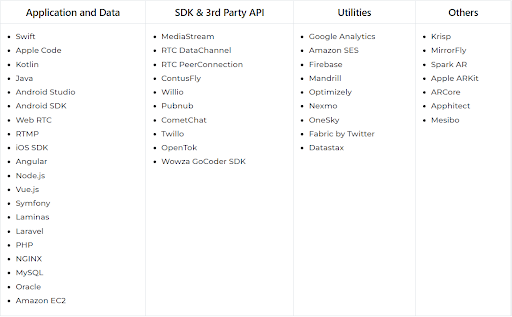 A video-conferencing app like Zoom will need a significant amount of effort on the development team, and it is best to entrust the task of developing a video conference app to a mobile app development company rather than a freelancer because there is so much that goes into its creation.

When you hire an app development firm, you get the following in-house resources:

This is the individual who is solely accountable for the project’s creation and completion. S/he oversees the entire team at all phases and ensures that the task is completed on schedule.

If the business decides to have the app produced for iOS and Android, a team of developers is required. This team can be made up of Android developers, iOS developers, or even two teams of developers for both platforms.

This team is in charge of the app’s backend work, which is the heart of the app; thus, backend developers must be highly skilled and experienced.

This is the team in charge of the app’s look and feel and the user experience, which is critical in determining the app’s success; therefore, having a team of sound designers is essential.

Once the app has been developed, it is critical to verify that it functions smoothly. To ensure that the work is running smoothly, a team of QA developers must review the app for any problems or issues.

How Much Does It Cost to Make a Video Conferencing App Like Zoom?

Now, you’re probably thinking, “Wow, these are some very cool features,” but how much would it cost to design a Zoom-like app? The price of creating a video chat app is determined by the features and functionalities you wish to incorporate.

App features, complexity, location of app development, the size of the app development team, the number of hours required to create an app, and the development platform are just a few factors that influence the cost of video chat app creation.

In India, the development cost for an app with typical features and optimal video streaming will range between $40,000 and $80,000.

The hourly rate of the developers, which is usually determined by geography, is the most critical element impacting the pricing of an app. 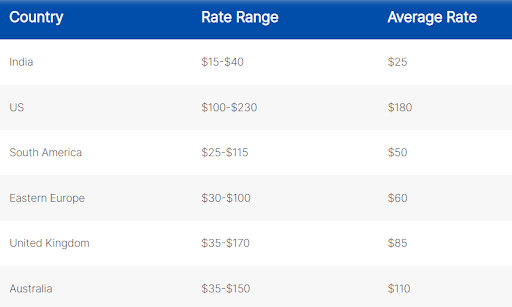 As a result, your application must include the same features and functionality as Zoom while also improving on the areas where Zoom has fallen short.

If you have a unique concept, hire mobile app developers who are experienced in application development and can help you create a video conferencing app like zoom.