Node.js vs. Golang: Which is Better for Web Development?

It might be difficult for businesses and engineers to select the ideal tech stack for their upcoming projects. It’s about creating and growing APIs, libraries, data management, and less-user-facing code, particularly for backend development.

In this article, we will compare Node.js vs. Golang to help you decide better by outlining the benefits of both. We’ll compare each language based on different factors. Lastly, we’ll also mention the top companies and apps using them.

Let’s hop right into it. 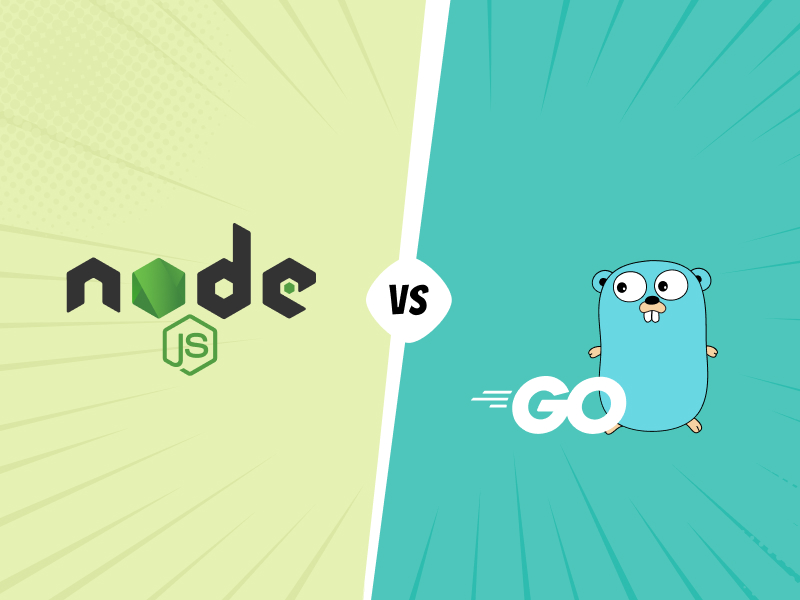 Node.js is a web development language used by 30 million websites. It is considered one of the 6 programming and markup languages. It is based on the V8 JavaScript engine used in Google Chrome and has countless libraries that aid in creating web apps. Even it reduces development costs by 58%. 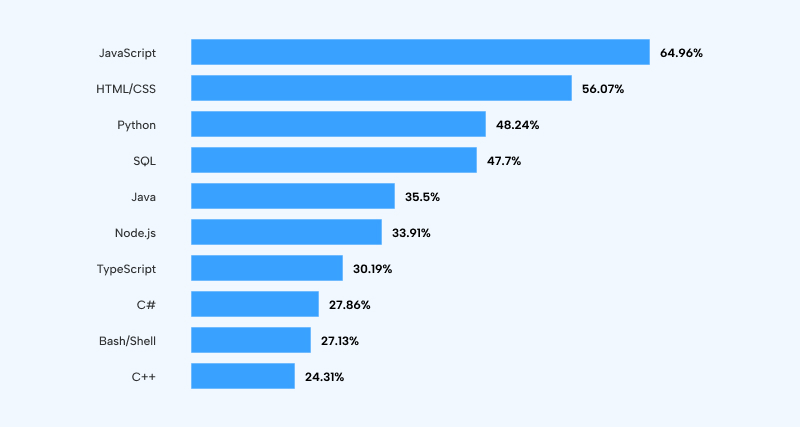 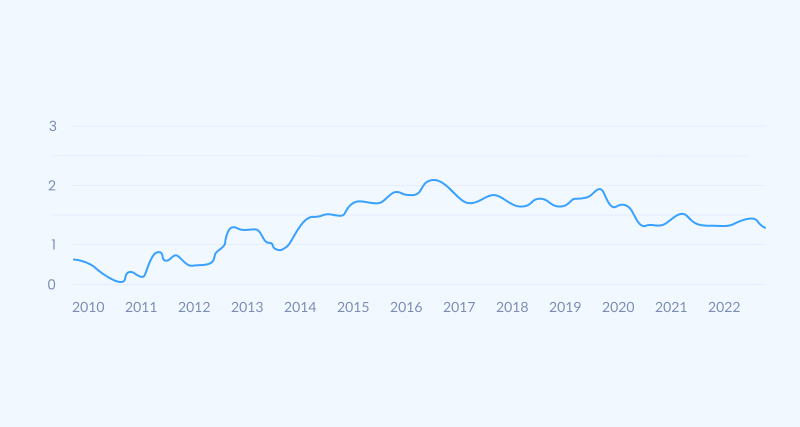 GitHub statistics show that since 2020, the Go community has increased by 147%. Golang was specially created for complex business tasks. It has been among the best choices for many powerful worldwide brands.

The best backend development technologies for creating reliable and scalable backend programs are Node.js and Golang.

Here, we’ve included a thorough comparison of the two web development technologies to help you better understand how they perform in various contexts.

Node.js provides concurrency with APIs like clusters, child processes, and worker threads. These APIs ensure that incoming requests are handled consistently and without chokepoints.

However, Golang is renowned for its exceptional capacity to manage multiple tasks simultaneously. We can employ GoRoutines, which enables apps to carry out multi-threaded operations without using many system resources.

As a result, Golang has a significant advantage in processing-intensive activities without affecting other operations.

Also Read: Node.js VS Python: Which is Better?

However, they differ in a few crucial performance areas. Let’s check how:

1. Raw Performance: Go wins when it comes to pure or raw performance. Go can run without an interpreter and is directly compiled into machine code. It provides Go with performance on par with low-level languages.

Go and Node.js provide a garbage collector feature that stops memory leaks and guarantees stability with memory footprint. In this approach, Node.js is a highly effective garbage collector, which is very beneficial for memory management.

2. Real Performance: Go performs slightly better in the real world than Node.js. Efficiency is increased by using a single-threaded, significantly upgraded version of Node.js. In addition, the V8 Javascript engine guarantees that the application will perform in real-time without requiring an interpreter.

However, Go vs. Node.js performance is frequently equal when network applications or database server connections are involved.

Since JavaScript has been used for more than ten years, a wide variety of tools for Node.js development are readily available. The JavaScript community has produced many libraries and tutorials and has been contributing for years.

This means that a lot of manual configuration will be needed even when employing a Golang development business for web development. Although Golang has several good packages and libraries, it will take time for Golang to catch up to Node.js.

Along with Microsoft, Intel, and IBM, the Node.js Foundation provides extensive support for Node.js. Nodejs achieved 1 billion downloads by 2020.

It demonstrates how widely used Node.js is and how large the community is continuously promoting its use.

Golang is working to match Node.js in terms of user base support and popularity. On GitHub, Golang has received more than 85k stars, while Node JS is slightly behind with 77.6k. The open pull requests for both are quite similar.

These figures demonstrate that Golang is working hard to catch up to Node.js but is still behind in community support.

The amount of time and work involved in constructing an app can be reduced by the accessibility of ready-to-use productivity and programming tools.

Node.js provides access to some 836,000 open-source libraries and tools via NPM. It offers a wide range of devices, but sometimes it can be challenging to pick the best one.

While Golang is a young language and does not offer a large selection of tools, it does come with a powerful library that provides sufficient features to ease development.

The Go programming language uses a unique method for managing errors. All lines of code should be explicitly checked for errors. On the plus side, though, it guarantees improved consistency and perfect results.

Error handling in Node.js can occasionally be unreliable. However, it offers better and clearer error handling than Golang, which uses the standard throw-catch handling method. The best part is many web developers are already familiar with this technique.

Go is a relatively young and popular language. Go is additionally considered one of the challenging web application frameworks. However, it has a better outlook because of its rapid growth.

Since Node.js is a widely used programming language, finding developers with experience in Node.js is significantly simpler. As a result, hiring nodejs developers to handle multiple development jobs is simple.

Go language was created keeping scalability in mind. The Go language is ideally suited for scalability due to the function goroutines, which can be executed concurrently.

As a result, the system quickly becomes disorganized. Additionally, Node.js only supports a single thread, necessitating the sequential execution of instructions.

This indicates that Node.js’s concurrency support is not as agile as it could be.

Meanwhile, Node.js is based on JavaScript, one of the most used and well-liked programming languages worldwide.

This makes it relatively easy for software developers to learn Node.js. We have enough offline and online resources to support both developers and learners. Moreover, Node.js enjoys the availability of the big JavaScript community that supports it and exchanges knowledge.

Use for Experienced Developers

As an experienced developer, it makes sense to switch to Node.js if you already use JavaScript. Learning a new “framework” is simpler than learning an entire language.

Node.js also uses the fastest JavaScript engine, the V8, which can save you time while writing and running code on your servers. This combines wonderfully with its event-based apps. It’s famous for making real-time processing applications, such as video games and communications.

The two main drawbacks of Node.js for programmers are that it works in a single-threaded approach which can be confusing if you’re not used to the style and that is dynamically typed, resulting in poor error handling.

On the other hand, Golang offers a simple learning curve. It might not be as simple as Node.js, particularly if you already have a solid grasp of JavaScript.

To broaden their skill set, Node.js gives JavaScript programmers the chance to work on both the front and back ends of websites. However, Golang might be a better choice for those who need to master a potent backend language that scales in the cloud.

Node.js has various libraries that offer machine learning. You can include AI capabilities in your Java projects. There are libraries like TensorFlow.js, TorchJS, and ONNX.js.

TensorFlow.js is a prime example because it offers the finest client and server-side support, one of Node.js’ key selling points.

Node.js includes appealing features for handling security threats and supports the GPU for quicker processing. But this approach is a little challenging. There are many loopholes to avoid, and even then, managing data may require using different languages.

On the other hand, Golang is much clearer. It can handle extensive data, so you don’t need different languages for support. It also has many machine learning tools already built into its library, helping programmers develop models faster and easier.

For machine learning, Node.js is a better alternative if you are familiar with JavaScript and concentrate on smaller data sets. Go is the way to go if you work with massive data and want something direct.

Go developers make more money than Node.js developers. Since fewer Go developers are available, studying it demands competence in various languages. For developers, switching to Go is a fantastic alternative.

On the other hand, many developers are already familiar with Javascript. As a result, there are more developers than available jobs.

These are vast numbers, and a developer’s pay may differ depending on factors like talents, years of experience, competence in the relevant industry, etc.

Which Companies are Using Node.js and Golang?

Comparing Node.js vs. Go allows you to understand which one might be better for your project. Let’s move on to the list of the largest businesses that utilized Node.js and Golang in production and why they chose it.

PayPal: PayPal is one of the popular and reliable systems used for receiving, transmitting, and accepting payments. The software enables users to communicate electronically without disclosing their debit or credit card information. More than 200 million PayPal accounts are active as of November 2017.

Interestingly, Paypal did not start using Node.js as its preferred technology. The first issue, according to @paypaleng, was the divided teams: those who independently code for a browser using HTML, CSS, and JavaScript and for those who code for server applications (using Java). Therefore, the main barrier was the line separating the browser and the server.

The answer was to write browser and server applications using JavaScript, combining two engineering experts into one team.

Benefits of Node.js for PayPal

Uber: Uber company works over 6 continents, 68 nations, and 633 cities, doubles in size every six months. As a result, Uber needs a platform that will always be available.

Their software connects driver partners with riders. Thus, it must analyze a massive quantity of data at a rapidly expanding scale. Due to its ability to keep up with the pace of Uber’s enormous business needs and improved data processing capabilities, Node.js was chosen by Uber to create its vast matching system.

Benefits of Node.js for Uber

LinkedIn: Many see LinkedIn as old-fashioned and outdated; it is still the most widely used business-focused social network and a useful tool for finding successful employment. There are 467 million LinkedIn users worldwide. In 2016, Microsoft purchased LinkedIn for $26 billion.

To avoid having users make several calls for a single page, LinkedIn opted to switch from their synchronous Ruby on Rails mobile app to an asynchronous event system. They chose Node.js as a result because of its scalability and performance effectiveness. Additionally, Node.js met their requirements.

Benefits of Node.js for LinkedIn

Dailymotion is a video-sharing website. This platform is mostly used for gaming, live broadcasting, and producing video content. Users can access any game to find live streaming of current games.

Dailymotion uses Golang to run automation tests numerous times per month as it is quick and powerful enough to handle them. Due to its fast execution, ease of use, and static type checking, Go is also employed in numerous backend development projects.

Benefits of Golang for Dailymotion

Soundcloud: Soundcloud is a platform for sharing and distributing audio online. Soundcloud users can upload, share, and advertise audio. With more than 175 million monthly users, it is among the top music streaming services in the world. Go is used by numerous instances of SoundCloud.

Golang was used to create and deploy the application itself. The programming language likewise handles the management of further internal service deployments. Go was chosen by SoundCloud due to its concurrency and other characteristics that make Golang the best choice for complicated projects.

Also Read: AngularJS vs React.js vs Node.js Vs Vue.js: Which Is the Right Framework for You?

Benefits of Golang for Soundcloud

As you can see, it’s hard to say which one is better in Node.js vs. Golang. It greatly depends on the type and features of the app you want to develop.

Golang and Nodejs are good at different things. It may be overwhelming to decide which programming language is better for web development.

However, Golang is ranked 5th among the top programming languages, leaving JavaScript behind.