According to Gartner, wireless IoT connectivity will be outpaced by low-power short-range networks by 2025, by far outnumbering connections build using the wide-area Internet of Things (IoT) networks.

For businesses to gain and adopt the full value of IoT technologies, significantly more investment is required in training and hiring professionals. Developing Internet of things will demand a huge range of new skills and technologies, including platforms, new hardware, operating systems, cloud services, high-volume data processing, as well as standards and ecosystems. This post will explore the top 12 emerging IoT technologies that can be utilized for IoT application development. 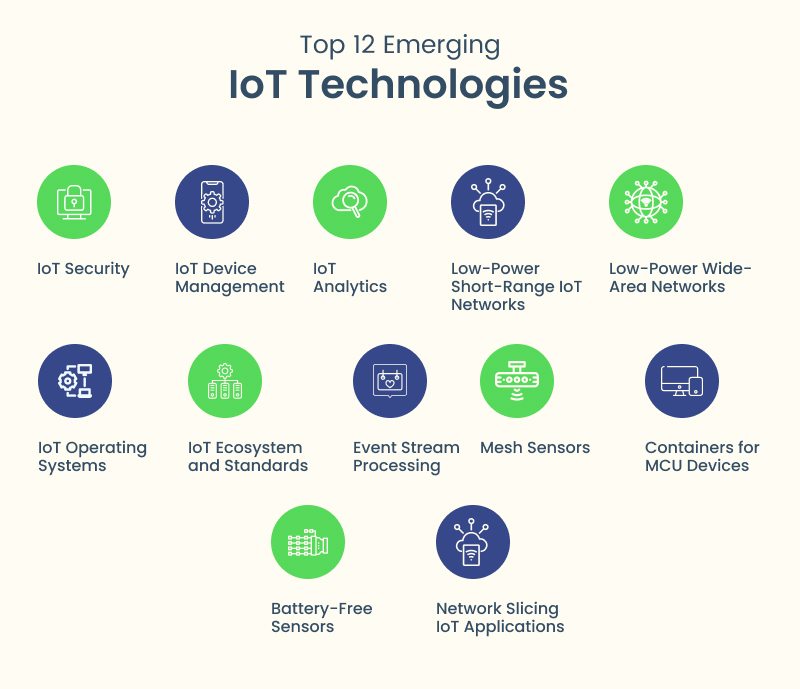 Security technologies will be necessary to safeguard IoT platforms and devices from cyberattacks and physical manipulation, encrypt their communications and handle novel problems like impersonating “things” or battery-draining denial-of-sleep attacks. The fact that many “things” employ basic processors and operating systems that might not be able to handle advanced security techniques will make IoT security more difficult to implement.

Security technologies will be needed to protect IoT platforms and devices from physical and digital threats, scramble their communications, and handle new challenges.

For instance, assuming the identity of “things” or engaging in battery-draining attacks against sleep. The fact that many “things” use basic CPUs and operating systems that do not support contemporary security techniques would complicate IoT security.

The next emerging technology in IoT will be enabling those technologies that are location, context, and state-aware while at the same time remains consistent with data and knowledge taxonomies. IoT device management will allow an IoT development company to break all the boundaries of traditional data management and create a new data structure, that is capable of learning and flexing to requirements of unique inbound data over time.

Analytics in IoT requires creating new algorithms, data structures, architectures, and approaches to machine learning if businesses are going to get the full value for the data captured, and knowledge created. Distributed analytics architecture will allow IoT development companies to use secure IoT network architectures, grab on pervasive that will actually become knowledge-sharing networks.

Low-power short-range IoT networks will dominate wireless IoT connectivity by the year 2025. This will outnumber all the connections that are using wide-area IoT networks currently. Therefore, IoT development companies should use this in order to develop new IoT applications for their clients.

According to a recent survey by Gartner, modern cellular networks are not able to deliver the proper combination of operational costs and technical features for the IoT applications that require wide-area coverage in combination with good battery life, low bandwidth, high connection density, low hardware and operating costs.

Although ecosystems and standards are not considered as technologies, they are eventually prepared as APIs(Application Programming Interfaces). Standards and all the APIs associated are important because IoT devices need to integrate and communicate. Many IoT business models usually rely on sharing data between multiple businesses and devices. For that, you need to hire app developers who are familiar with all the ecosystems and standards of IoT.

Some Internet of Things (IoT) applications generate extraordinarily high information rates that need to be monitored constantly. Systems that perform numerous times per second are common, and an enormous number of times per second may occur under certain conditions.

Future wearables will be able to track the precise movement of the body in addition to heart rate, exercise, and sleep quality measurements. Mesh sensors play a huge role in this. A wireless network of sensors makes up the technology and the sensors that may be incorporated into clothing and collect infinite data points.

An app can use those data points to calculate the body’s position in 3D space. This is the precise strategy employed by one mesh sensor company, Cipher Skin, whose BioSleeve monitors are appropriate for various applications, including rehabilitation programs and extremely strenuous exercise routines.

The use of containers for microcontroller units, or MCUs, tiny, low-power circuits that power tens of millions of IoT devices, from connected washer machines to heat sensors in oil refineries, is an area that hasn’t received as much attention as other areas of container technology.

An approach for distributing application containers to MCU devices with real-time operating systems has been created by a vendor by the name of Nubix. According to the company, these solutions will increase IoT device creation, maintenance agility, and scalability.

Imagine the effects of sensors being able to generate their power: battery replacements would no longer be a concern, which is significant when sensor deployments reach the hundreds, if not thousands, or tens of thousands over numerous sites.

The Eversensor, developed by a Santa Clara,  to the manufacturer, Eversensors can operate without regular maintenance for 20 years.

Companies are looking to network slicing to separate connections for IoT devices with various requirements for latency, stability, and capacity, among other things, as 5G networks go live worldwide.

According to Ericsson, one telecommunications company that has made the technology accessible for 5G networks using its equipment, network slicing can be used to ensure, for example, that mission-critical IoT deployments have a low-latency, high-bandwidth connection.

According to the company, this can let enterprises develop new business models across various “slices” of their 5G networks while enhancing infrastructure effectiveness.

The IoT market is expected to grow by 18% to 14.4 billion active connections by the end of 2022. There will likely be about 27 billion linked IoT devices by 2025 as supply limitations loosen and demand accelerates.

However, only one percent of IoT data is used and analyzed. All these technologies are going to take IoT to a whole new level. Each of these developments will advance IoT to previously unheard-of heights.