Java vs .NET : Which Is Better For Your Business? 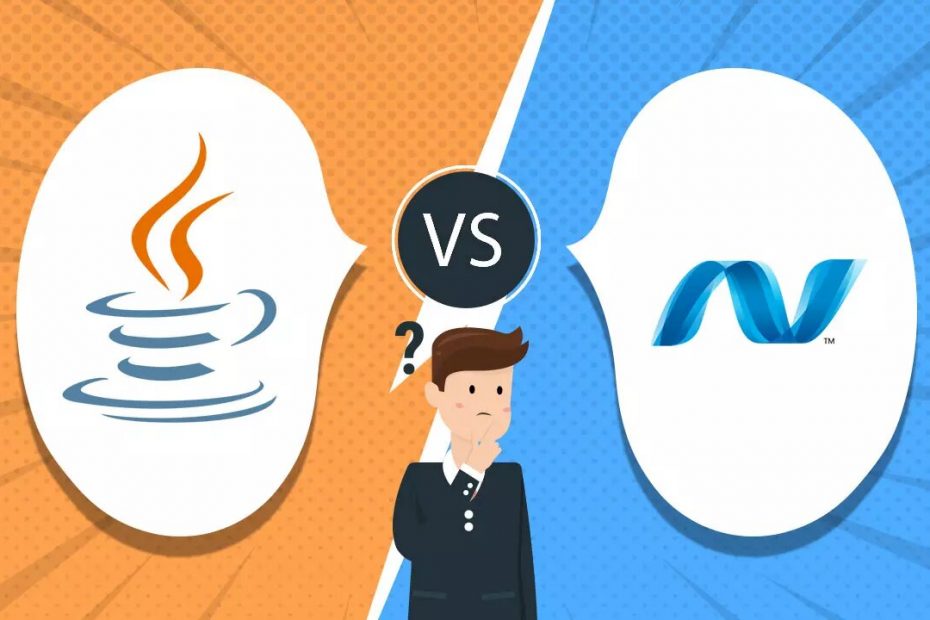 When faced with the choice between Java vs .Net, you must know the background of each and how it will benefit your business. In this article, we have compared both the languages highlighting their strong and weak points. Keep reading to discover more.

The choice of language plays a vital role in the development of a website or app. Often, businesses choose the wrong language for their website and end up failing, eventually resulting in the waste of their hard-earned money and time. Hence choosing the right programming language is essential.

However, picking up one of the two languages is easier to do than said. We just have to focus on our requirements and then determine which one will give us our desired result. For now, let us consider Java vs .Net. Which is more crucial for your business?

The world of programming is polarized between the two titans- Java and .Net. Both are leading technologies using which we can easily create a large-scale enterprise-level application.

While both platforms perform almost similar functions, there are some core differences between them. These differences are essential for the proper development of your project. Undoubtedly, both languages have their benefits and own set of applications. But how do you choose which one is better?

Don’t worry; we’ll help you. So that when you contact the best web development company in India, you know what you exactly want.

Did You Know? As per the latest web development stats, there are around 108,010 websites that use Java, while 2,260,861 live websites using ASP.NET

Winner: If you focus on Windows users only then .NET will be the right choice for your website. But if you want your website to run on any device, then Java is a go-to language. Hence, it’s a slight advantage to Java.

Winner: Both are equally good when it comes to performance. But because of multiple platforms, Java might be a bit slow as compared to .NET.

Java vs .Net: Who is dominating the who? Java has been the hot trend and favorite of web developers and businesses for a long time. There was also a notion that said: “The future of web application development lies in Java.” Due to this reason, Java gained popularity, and almost all the developers started learning Java. The result was that Java development companies in India had a huge demand.

Things changed after the arrival of ASP.NET or .NET. The robustness and competitive edge ASP.NET provides helped it gain momentum, and its extensive use for web app development started.

Going by the stats, the websites built using ASP.NET are in the top 10 k, top 100 k, and even in the top 1 Million websites.

Winner: Even though Java has been there for a long time, ASP.NET is dominating the market. So, the winner of this trait is ASP.NET.

Java vs .Net: Comparison based on Advantages

Java vs .Net: Comparison based on Disadvantages

Winner: Based on the above advantages and disadvantages, it is difficult to conclude, which is better. This is because both Java and .NET have their perks. So, it’s a tie. Based on your requirements you will have to choose the one for your web development.

A recent study conducted by Gartner has shown that Java will maintain its position as the most popular programming language until 2020. 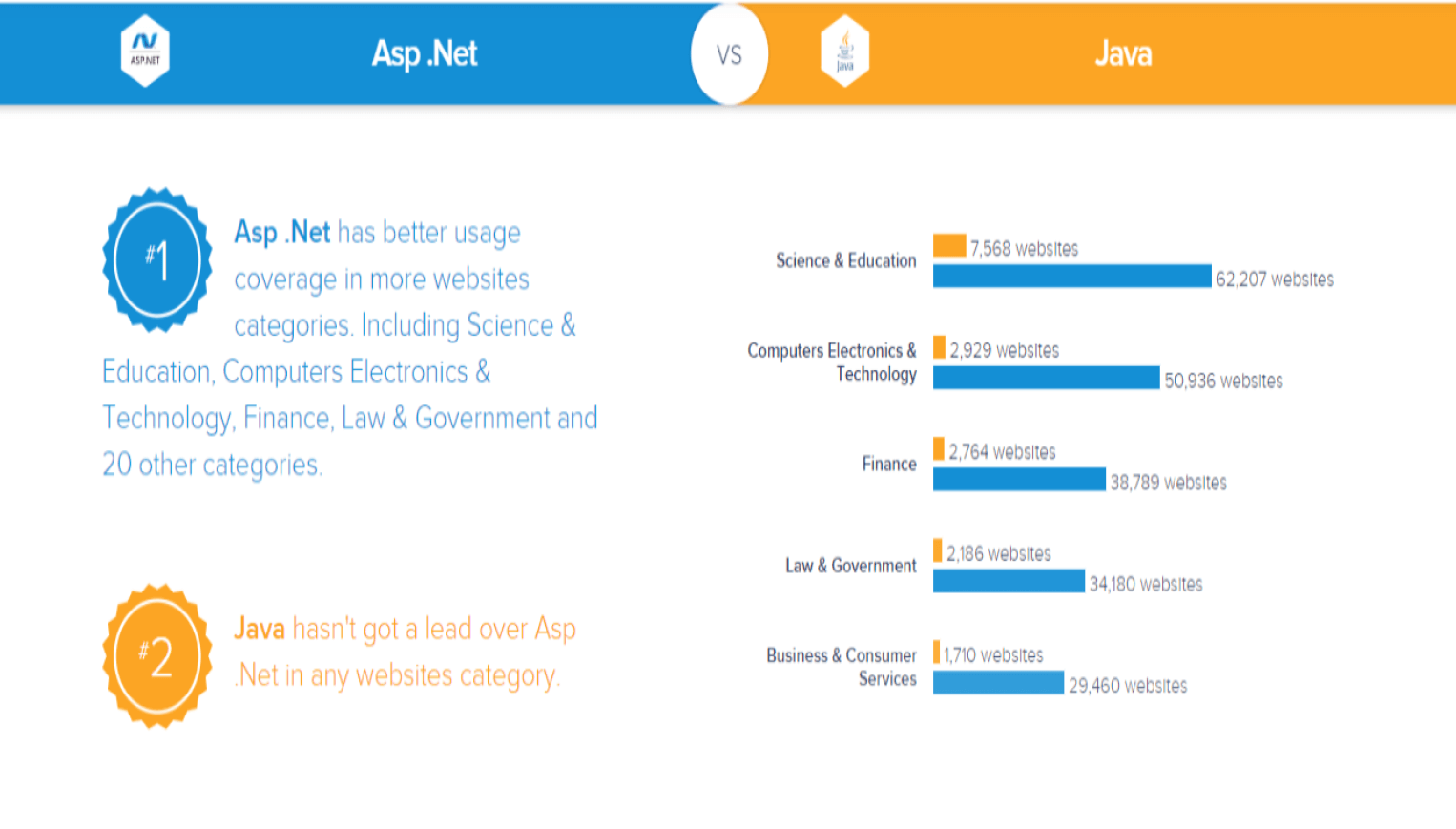 Winner: Recently, many developers have switched from Java to .Net due to the rise in popularity of .Net and its community. Developers who are proficient in both can gain benefits out of knowing about these statistics, but before comparing the two it is important for us to understand what each platform has to offer.

Java vs .Net: Development at the Enterprise Level

Both Java and .NET are great technologies that can help you achieve your primary goal of enterprise-level website development. Their origin lies within the C# (.NET’s primary language) and C++ and C(Java). Both these languages are object-aimed and are type-safe. While they are using different syntax, both Java and .NET give their best to achieve the same result.

Winner: Having a .NET based solution may be the preferred option for an enterprise-grade application. All this entails high-end security and top-notch data security. While a Java-based solution would be perfect when the primary need is multi-platform operability that is in line with the saying “writing things once and deploying it just about anywhere.”

Java vs .Net: Which one should you choose?

Choosing between both Java and .NET technologies is not easy. We are well aware of the advantages and disadvantages of both languages; there are still chances that you might end overlooking a thing or two.

This is why it is essential to keep some simple yet effective points in mind.

Point 1: Are the resources you have enough for web development?

This point might sound simple, but it turns to be a big issue later on.

Generally, companies have large in-house teams. However, many rely on software outsourcing companies in India. Unless you have a team, outsourcing your software is not a good idea.

So, you must check that the company you are outsourcing your website project has enough .NET or Java developers to cater to your needs. Then you can discuss your idea with the team and choose the language which suits you.

If your answer to the above question is yes, get in touch with a top Asp.Net development company in India & go with .NET. This is because creating complex websites using .NET is easy as you can pick the best from every language.

Else, go with Java. A more flexible approach will be offered to you by Java-based solutions.

Point 3: What about your time and budget? Budget is one of the main constraints that you can’t overlook.

If you rely on Windows-based software to run your business and have a tight budget, then stick to .NET. It will result in less expenditure.

When it comes to Java Vs .NET, there is no right or wrong choice. Both of these technologies have their positive and negative aspects. Either of the two can help you create feature-rich and dynamic enterprise apps. Choosing between Java vs. dot net depends upon the requirements of your website, available development resources, and the end-users.

To grow and excel in a competitive market, you will need both languages. You, as a business, can take advantage of the positive aspects of each resulting in high-performing websites and applications.

And to take advantage of both languages, you must get in touch with an expert web development company in India. Only an expert can help you develop an expert solution providing you with the best services you are looking for. Cheers!

Java and .NET serve different purposes. Java is a programming language for general-purpose software, while .NET provides tools for building applications that rely on a common codebase to run across multiple platforms. In many cases, an organization’s choice of technology hinges on the type of application they’re developing. So if you’re building a web application, you might want to consider the pros and cons of both.

However, if your business is building a line-of-business application that will be used only by employees within your organization, then we can say that .NET would be better for this type of project because it lets you build and deploy applications faster.

.NET is more secure than Java. It has been designed from the beginning with security in mind, while Java doesn’t have a consistent platform for security.

Q3- Can I build Windows applications with Java?

No, you can only develop server-based web applications with Java and cannot use it to build desktop apps or web browser plug-ins. However, several web-based frameworks are available, which allow you to build rich client apps using JavaScript and HTML.

Q4- How is memory management in Java different from .Net?

Java compiles your source code into an intermediate language (bytecode) before executing it.

.Net dynamically compiles your code into machine language at runtime. Java’s memory management is automatic, while .NET provides more control over memory allocation and deallocation. Also, .NET has a Garbage Collector, which cleans up the unused objects and reclaims the memory, whereas Java doesn’t have any such garbage collector.

Q5- Are Java and .NET both cross-platform?

Java is cross-platform, but it depends on the implementation of the JVM. The .Net Framework is also a cross-platform framework that allows you to run your code on any operating system that implements CLR. However, Microsoft Visual Studio only supports Windows OS.

Q6- What is the difference between Java and .Net architecture?

.NET is easier to learn than Java. It has syntax similar to C# and Visual Basic, making it easy for new developers to learn .Net development quickly. In contrast, Java takes more effort to learn because of its syntax and primitive data types. However, both languages require you to know object-oriented design principles.

Q8- Is Java or .NET better for mobile applications?

Both Java and .Net can be used to develop cross-platform mobile apps, allowing you to reuse your codebase to deliver native apps on different mobile platforms. However, it is easier with .Net because it supports Windows Runtime, making it easier to port your code on Windows Phone. On the other hand, Java doesn’t have official support for this.

2 thoughts on “Java vs .NET : Which Is Better For Your Business?”