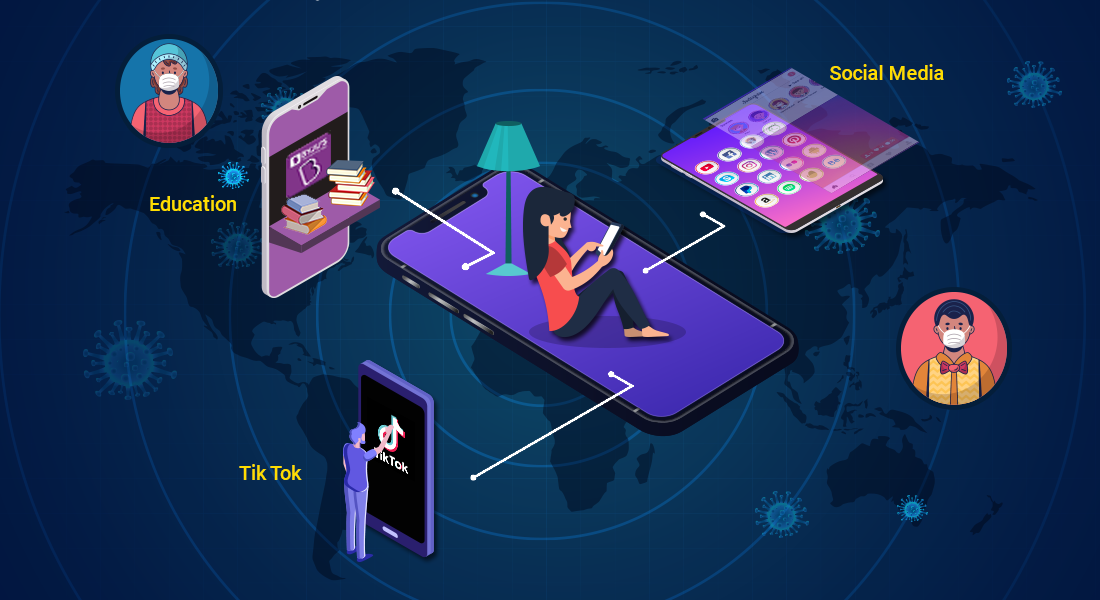 Benefits of mobile apps in coronavirus

No one can stop the calamity, unfortunately! Something like this happened in the world and Coronavirus welcomed itself.

Who knew it before that there will a great pandemic in 2020 named by Covid-19? Yes! It is true that the whole world is suffering under the shadow of the coronavirus. This virus has stopped the activity that used to happen in day to day life. We can see a big change that is happening in the world.

Some big changes that have come about are that you can see all educational institutions have been closed, traveling has been stopped, all corporate employees are working from home, the people are quarantined inside their homes. All these actions are someways affecting the worldwide economy.

While suffering through this hard time, still there is something which is getting the benefit. Yes! We are talking about the benefit during this pandemic. Well, do you know that mobile apps are seeking public attention towards them at this time?

According to statista.com, The outbreak of coronavirus in Poland caused nearly 90% of companies to implement remote working. This situation has resulted in increased use of mobile applications & mobile app development companies are having a field day.

For example, the Microsoft Teams application recorded an increase in use by 195%. However, Facebook Messenger and WhatsApp enjoyed the greatest popularity in the off period.

Let’s have a quick look at the below-given graph: 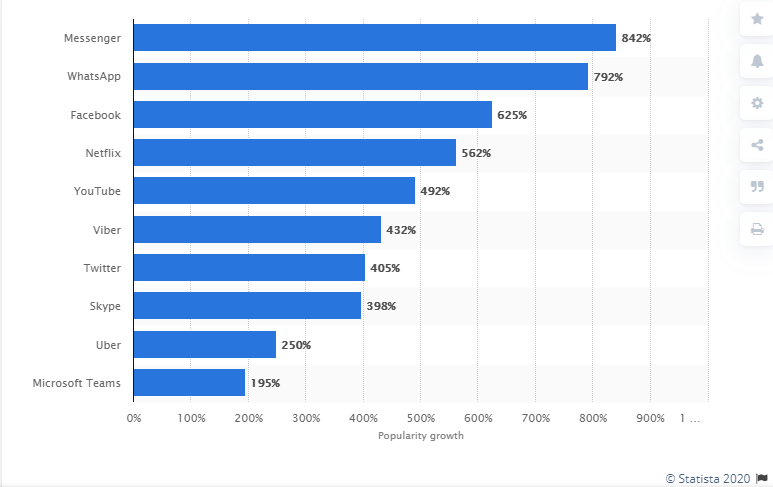 Use Crello for free Graphic Design

So, after going through this stat, you can realize that the mobile application industry has gained much popularity during this period.

Now, let’s discuss how and why the mobile app business is growing while other businesses are suffering a lot? 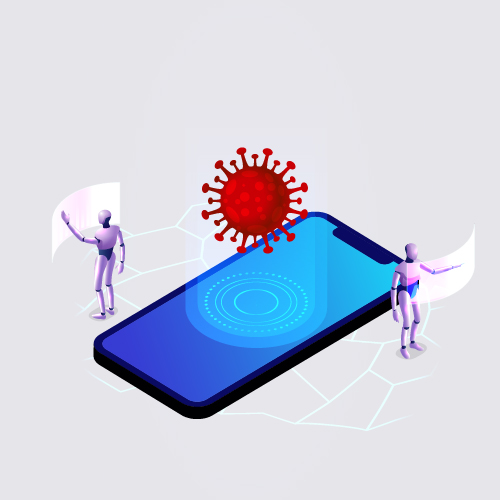 Gaming Applications: A Source of Entertainment

It has seen that mobile applications are one of the most effective and amazing ways to keep people entertained. People are turning towards mobile apps more and more in order to keep boredom away in this time of boredom. So, automatically there has been a massive increase in the downloads of mobile apps.

Let’s take an example of China, who was the first contributor to this massive increase in mobile app downloads. If we look before Feb 2020, the total number of mobile apps downloads in china was 80% as compared to the average weekly download for the whole of 2019. Similarly, like China, other countries are also seen participating in the activity of downloading mobile apps.

The gaming apps which ranked in the top 10 list of the downloads during the first week of March are: Notably, Slap Kings, Woodturning, Draw Climber and Brain Test: Tricky Puzzles

So this sudden increase in the downloads is directly indicating us towards the fact that how gaming applications got benefits during this covid19.

Social Media Apps: A Source of Connection During Quarantine

Apart from the gaming apps, we have seen people spending most of the time on social media apps in order to get connected with their loved ones while keeping their safety in mind as well.

If we take an example of China, it could be said that Tiktok is the most widely used social media app here, especially during this covid-19 outbreak. Tiktok is a social media app that is one of the best sources of entertainment for watching small videos as well as connecting with others.

People spent the most time on Tiktok on 1st March 2020. It was the biggest day when the usage of Tiktok exceeded its limit to 68 billion hours worldwide. 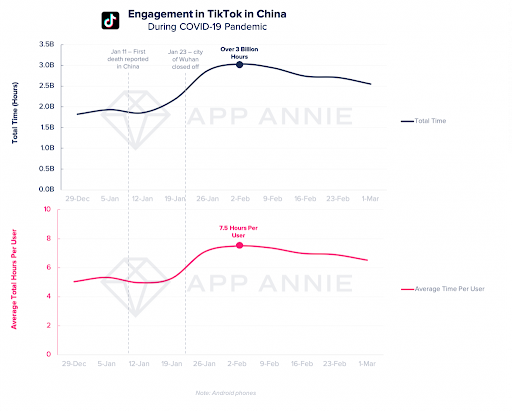 Here, I will add one more kind of apps that are considered a great source of entertainment –Video-streaming apps. The top video streaming apps which people downloaded the most in the month of March are Roku and Pluto.tv, completely free, whereas, Netflix, Hulu, Amazon Prime Video all require subscriptions.

An interesting read: 35 Top App Ideas for 2020: It’s High Time To Get Started

The downloading of Business and education was one of the major movements that happened in the week from Feb 2, 2020. Well, this was one of the biggest weeks in China in which there was a huge number of iOS apps downloads.

The first week of February was the biggest in concern to business and education apps downloads and was twice the number of Feb 2019. Famous apps during this time included HUAWEI CLOUD WeLink, DingTalk and ZOOM Cloud Meetings. 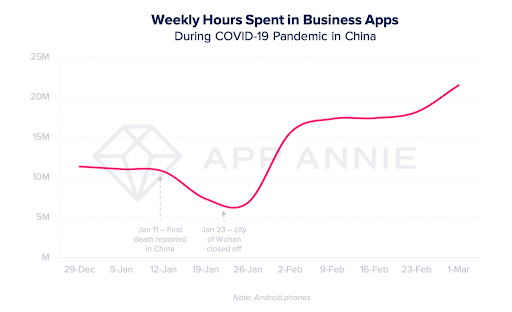 The same trend was seen followed by Italy. When Italy started gaining more coronavirus cases in Feb, it became the focus of those European towns which entered a quarantine.

Talking about the downloads of the mobile app during this period of quarantine in the first week of March, it could be said that Italy downloaded over 761,000 of Business apps that occurred across iOS and Google Play. This was one of the biggest weeks in concern to downloads of mobile apps that has ever happened before.

Just like other apps, people are seen spending their time in mental health and telemedicine apps too. In the first week of March in the US, people made the highest use of Headspace — meditation and mindfulness app in order to release stress at the time of social distancing and isolation. So in this way, the increase in spending time in iOS was seen in the US.

Talking about Android apps, we have seen a massive increase in time spent in the Mayo Clinic app on Android phones in the US week over week. With the help of this, people can get connected with healthcare professionals in order to gain information about the symptoms of the diseases. 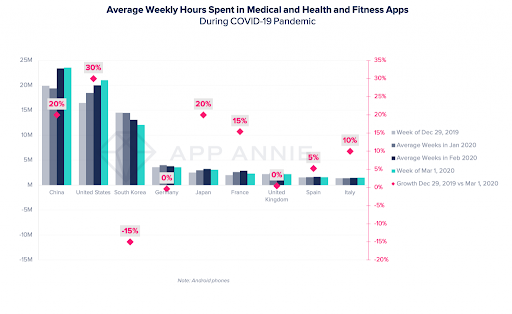 As during the time of quarantine, people cannot go outside of their houses, they are seen spending their time in healthcare and fitness apps both in China and Japan.

In the first week of Feb in China, we saw a massive increase of 210% in the usage of “keep” a fitness app. On the other hand, ITICET, a medical appointment app gained the attention of people in Japan with a 50% growth in Android phones.

After going through the above-given pointers, it could be said that while the world is suffering from the consequences of coronavirus. But these consequences are in favor of mobile app development companies and it’s users. You can hire app developers & make use of the current situation.