Node.js VS Python: Which is Better? 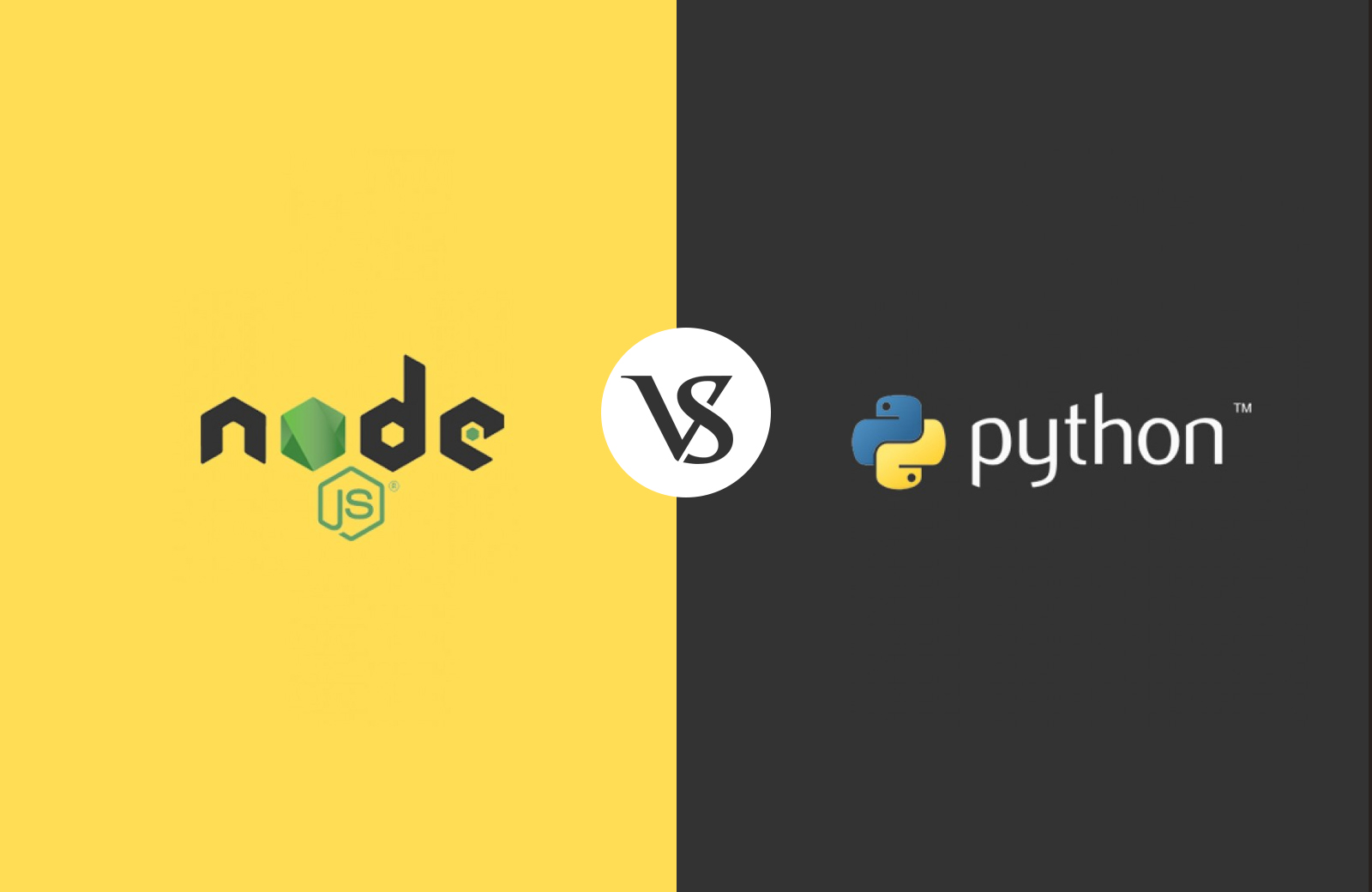 – Node.JS vs Python: Which is the right choice for my next web app development project?

– Which programming language cost me less?

– Which programming language is suitable for which industry?

– Which programming language is suitable for small businesses or large scale enterprises?

– Which programming language is scalable, high performing and secure?

1. Node.js VS Python: A Brief Intro

Node.js and Python are extensively used for this purpose. When you talk about Node.js or python, you are actually comparing JavaScript with Python. This is because Node.js is actually a framework built on Google Chrome’s JavaScript.

According to the survey, analyzing industry-wise choices, Node.js has been heading in Computers Electronics & Technology, Lifestyle, Arts & Entertainment, and 16 other categories. On the other hand, Python is a wide choice in industries, including Engineering, Science & Education, and others. 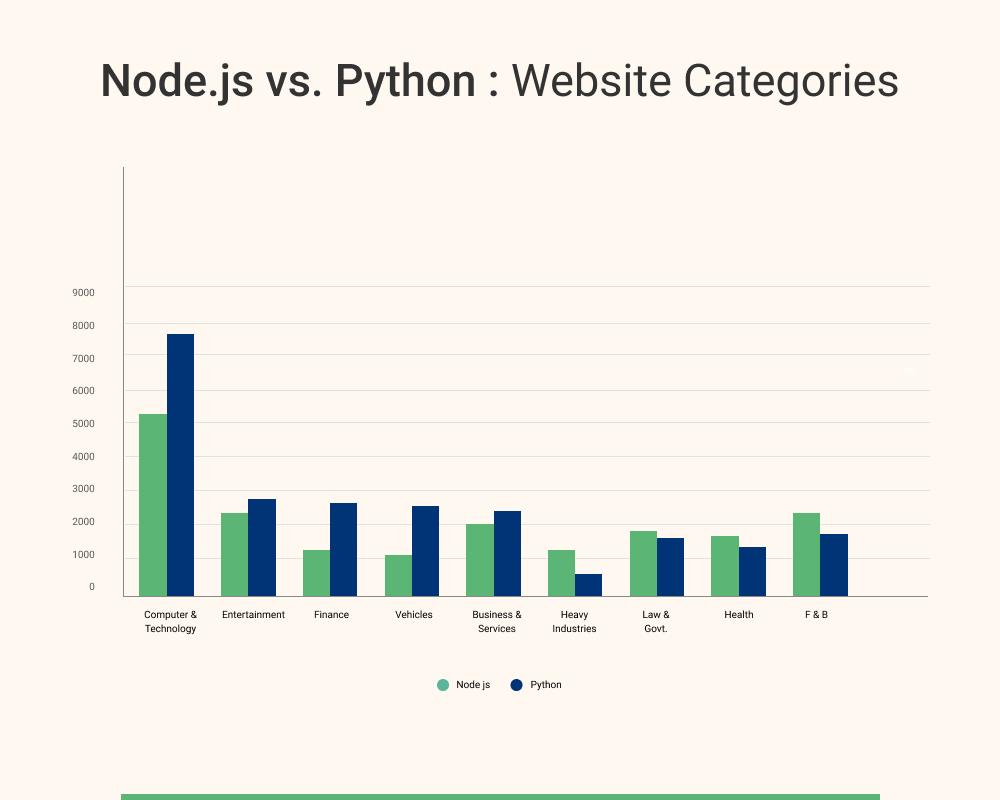 In fact, choosing the best technology for the development of your project is not that simple. It requires an in-depth analysis of various factors and facts. Let’s discuss the major aspects to solve the popular query of Node.js vs Python: Which is better?

Get Advanced Web App from A Trusted Python Development Company in India with 100% Money Back! 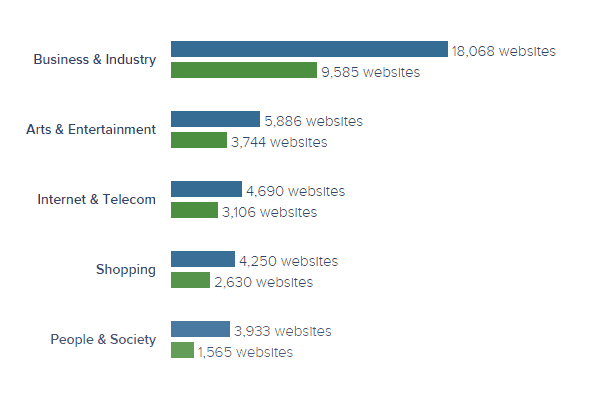 According to the above representation, Python is a popular choice in all domains under consideration. Python is being used since its launch in 1991 and has more coverage in websites under all categories. 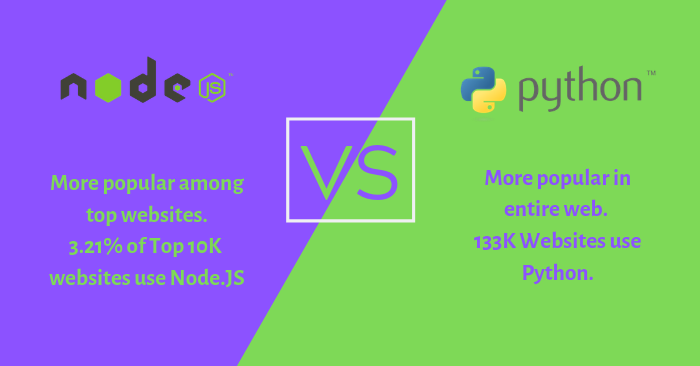 It is obvious that you want many new people to use your applications without any hindrance. The capacity of an application to support an increasing number of users without any flaw in its performance is known as scalability.

Scalability through Node.js programming can be achieved naturally as it creates asynchronous architecture in a single thread. This default feature of this Javascript framework ensures the smooth scalability of applications written in NodeJs code.

Simple web apps can be created with a complete guarantee for scalability by using the NodeJS framework. If you wish to provide the same convenience in the complex app then you will have to hire Node.js app developers who have in-depth knowledge.

On the other hand, Python does not have the default feature for supporting asynchronous programming. This means that Python’s architecture is not as scalable as that of NodeJS. But Python has some tools to offer which allow achieving scalability easily.

The learning curve is a measurement of the ability of users to write code in a particular language or framework. It depicts the fluency of web app developers in syntax and tools. In the case of NodeJS, if you know JavaScript then it will not be a problem to learn this framework.

This makes it easy to learn. Probably this is the reason NodeJS has topped the list of most popular frameworks with a remarkable score of 49.9%. 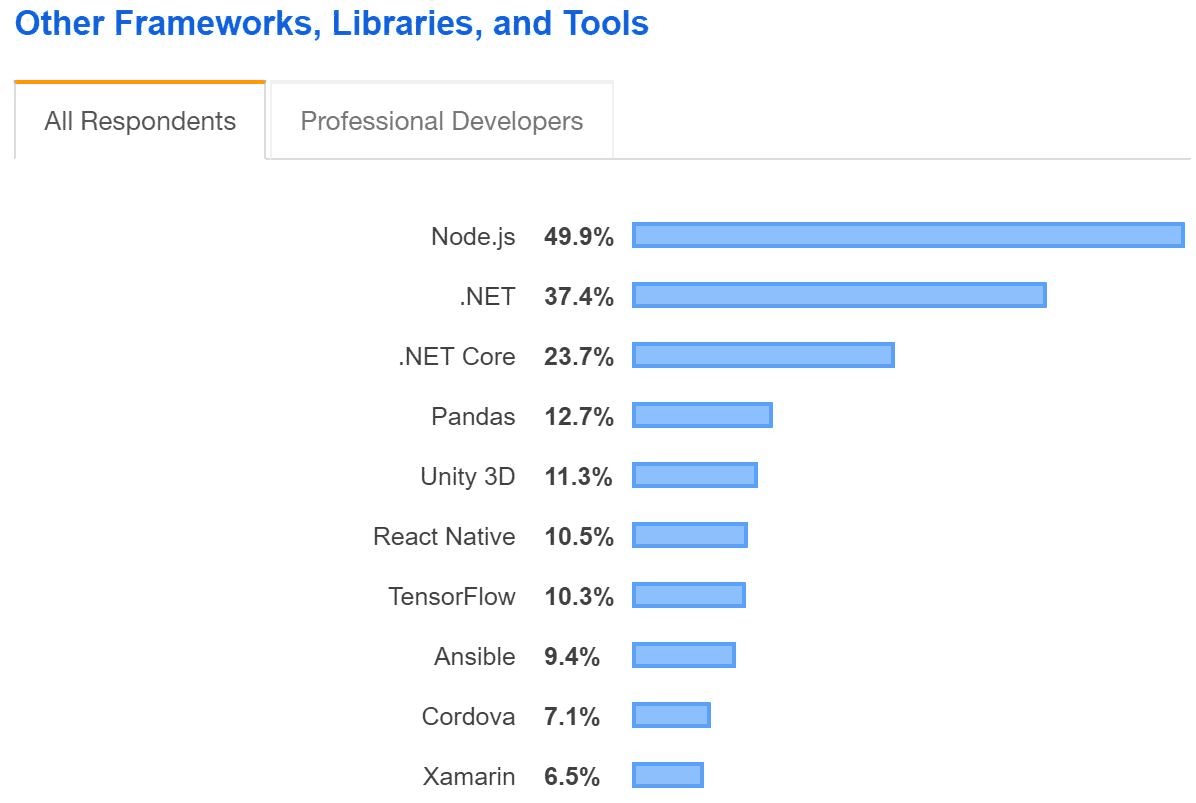 On the other hand, Python language is not written in a well-known language like NodeJS. So, its syntax is new to python developers. But it has a cleaner and compact code. One can easily write its code as they have to write fewer lines.

A few lines of code in Python can help you reach the same result as NodeJS. Moreover, being an old language, it has well-developed documentation also. A software developer will never run short of a knowledge base when it comes to Python.

In the StackOverflow survey, Python is among the topmost preferred languages. Full-stack developers love to use this easy, precise, and efficient language for building apps. Here is the graphical representation of the same: 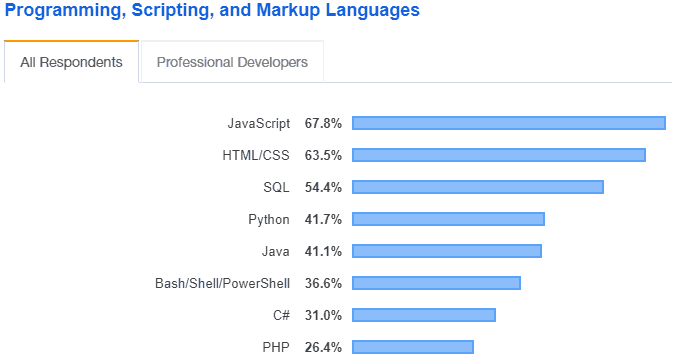 Summary: Python is easier to learn than NodeJS if you do not know JavaScript. 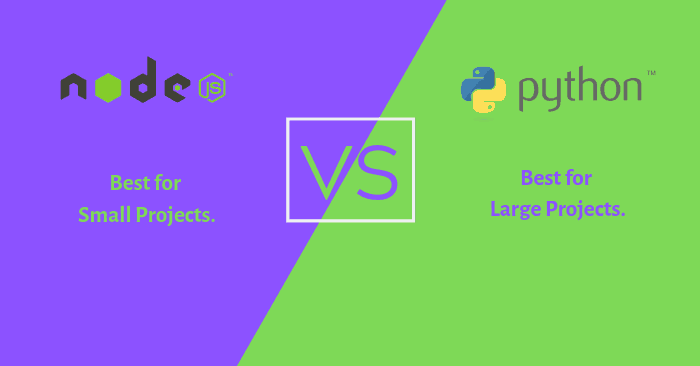 Node.js is ideal for small projects in web application development and website development. It is not recommended for web development companies to use this framework of javascript for large projects because it lacks clear coding standards.

On the other hand, Python is suitable for a vast range of projects from web apps, numerical computations, to machine learning and network programming. It is an ideal programming language to perform various tasks.

Python has several frameworks that can be used for backend like, Django, Flask, Pyramids. It also has frameworks like Tkinter/PySide which can be used at the front-end. Its precise coding makes it ideal for large projects also.

Therefore, if you are planning to get a large project developed then choose python developers. But if you have a small business or startup then your ideal choice should be to hire NodeJS web developers. 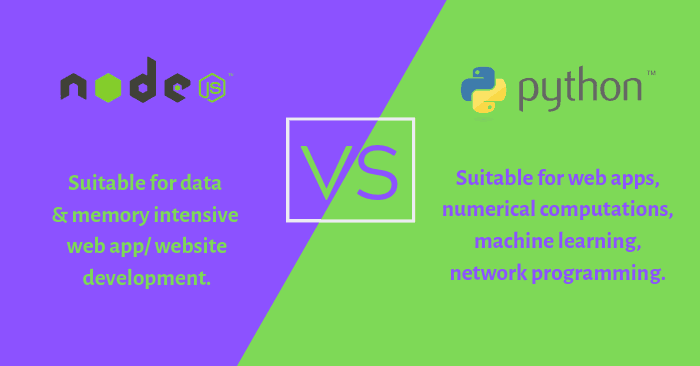 Node.js is probably the best framework of contemporary times to develop data-intensive run-time applications. For example, you can develop apps that involve chat functionality. Such apps developed by Nodejs development companies can proficiently handle proxy, queued inputs, and data-streaming.

The high speed offered by NodeJS has made it an ideal choice for heavy traffic sites like e-commerce stores as well. It is also suitable for memory-intensive activities like developing applications using 3D graphics.

On the other hand, because of the lower speed, Python is not an ideal choice for real-time applications. It is also not suggested to use Python in memory-intensive applications. 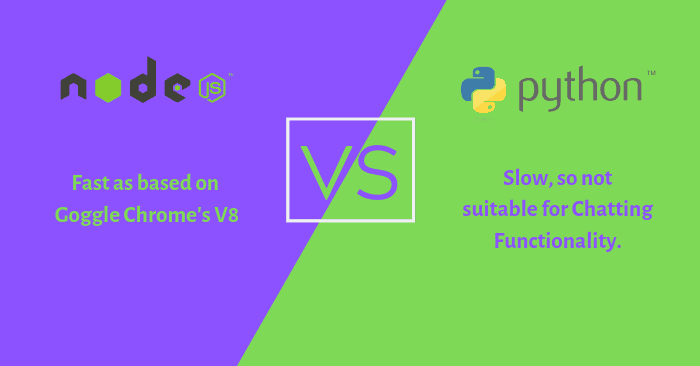 Performance is directly related to the speed of the application. This speed is the rate at which your code can be executed. This is the chief feature that we look for in any programming tool.

The comparison of Python and Node.js on this parameter is not tough. We all know that NodeJS is based on Google Chrome’s version 8. It is a very powerful and fast engine. This has made the speed and performance of NodeJS extremely high.

In comparison to Python, NodeJS wins in speed and performance. This is why it is preferred for chatting or messaging app development. While Python is not recommended in data-intensive run-time applications.

Therefore, if your idea revolves around chatting functionalities then NodeJS is a better choice than Python. Select according to the core purpose of your web development project.

When the developers write codes, errors are an unavoidable part. The convenience and transparency in detecting errors are quite important when it comes to a programming tool. The tools we are discussing here are efficient in handling errors.

Although, Python has an upper hand here as it takes less time to fix the bugs as well as errors. Node.js also has a good command in catching exceptions that occur during code execution.

So, error handling will not suffer if you choose any of the two programming tools for the development of your website. This will also reduce the overall completion time and increase the chances of getting a robust website in the first attempt.

Summary: NodeJS and Python are almost equal in catching and throwing errors.

When it comes to coding, the answer to the question, “Which is more secure?” usually depends on what you are coding. For example, if you are programming in NodeJS, there is an excellent chance that the code will be vulnerable somehow or another.

But when it comes to Python, NodeJS may be more secure. Yes, you read it right; Python is regarded as one of the most secure languages out there, even though security experts don’t regularly talk about it. 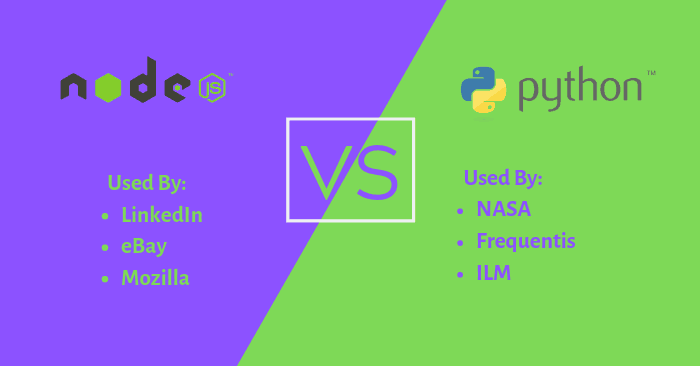 LinkedIn: One of the largest platforms for interaction among professionals. Node.js has successfully managed its ever-growing user base. Loads of messages, as well as connections, are very well taken care of by the high-speed attribute of this Javascript framework.

eBay: A famous e-commerce store for C2C and B2C sales operations is used worldwide. The ability of Node.js for handling heavy traffic sites and data-intensive applications has been appreciated by eBay.

United Space Alliance: For the NASA shuttle program software development, they chose Python. The massive data processing and ability to serve complex programs of the Python programming language impressed them.

Frequentis: The straightforward syntax of Python allowed this air traffic management, transport, and public safety solution provider to use it. Python is used for developing navigation and weather condition monitoring instruments of the company.

Industrial Light and Magic: Python eased the process of maintaining outstanding batch processing abilities of ILM. It has proved itself the best choice for the processing of thousands of frames per day.

A must read: Top 10 Python Web development companies in India & the US

Key Differences between Node.JS and Python

In the end, these are the three things that we can conclude:

I hope that after reading this complete post, you have a clear idea about the most suitable programming tool for your web app development project. All web technologies are efficient in one or the other way, you just need to find out the most suitable one according to your business goals.

If you have any suggestions or addition for this blog, then please share them with me in the comment section below. I am open to a healthy and informative discussion with readers because I believe that knowledge increases with sharing.

Node.js is a compelling web development framework/platform that runs on the V8 JavaScript engine of Google Chrome and allows developers to build network applications easily and quickly by using push technology (instead of HTTP pull technology as seen in other platforms). It can be used for creating scalable real-time applications like chat, game servers, etc.

Python is a general-purpose, high-level programming language that can be used for web development and software/product development. The developers widely adopt it because of its clean syntax, easy-to-learn nature, and powerful libraries like Django (for web development), requests (for HTTP clients), etc.

What is the difference between Node.js and Python?

The following points highlight the significant differences between Node.js vs. Python:

1) Node.js is JavaScript-based while Python is not. The sole reason programmers are attracted to Node.js is that they can use the same language for backend development used in the front-end. While in the case of Python, developers need to learn a different language (for backend), this will be an advantage for some programmers because they can focus on learning just one programming language and do not need to switch the context from time to time.

2) Node.js uses a non-blocking I/O mechanism which scales very well and is better than Python.

4) Node.js has a vast developer community and is more popular than Python. The express framework makes Node.js web development easier than other platforms. Also, the support for features like web sockets makes it stand apart from alternative technologies like PHP, ASP, etc.

Which One is Better between Node.js vs. Python?

This question can be answered only after studying the requirements of a project. If a task requires a real-time application with instant responses, then Node.js will prove to be more beneficial because it can handle more requests in less time. In contrast, Python is not ideally suited for such problems (although there are ways like multi-threading, event, etc., to make it perform faster).

But if the task needs a project having less I/O operations and quick processing, then Python can be an ideal solution. Also, Python has the edge over Node.js when long-term stability is required or compatibility issues with other technologies used in the backend.

Python is much more stable than Node.js because it requires frequent updates in browsers to work with it. Also, Python is much easier to maintain when compared to JavaScript (to some extent).

Is Node.js Easier than Python?

No. Both are equally easy to learn, but node js is much more popular than Python in web development because of the following reasons:

Is Python better than Node.js?

Yes, Python is much better for long term projects because of the following reasons:

Which is Faster, Node.js or Python?

Both Node.js and Python are equally fast on identical hardware configurations. The difference comes into play when considering different use cases because each technology has limitations that the other can overcome.

1 thought on “Node.js VS Python: Which is Better?”