If you’re looking to start building your first hybrid mobile app, you might be wondering where to start. Hybrid mobile app development frameworks make it easy to develop apps that work on different platforms without needing to learn native coding languages to focus on your product’s user experience and usability. 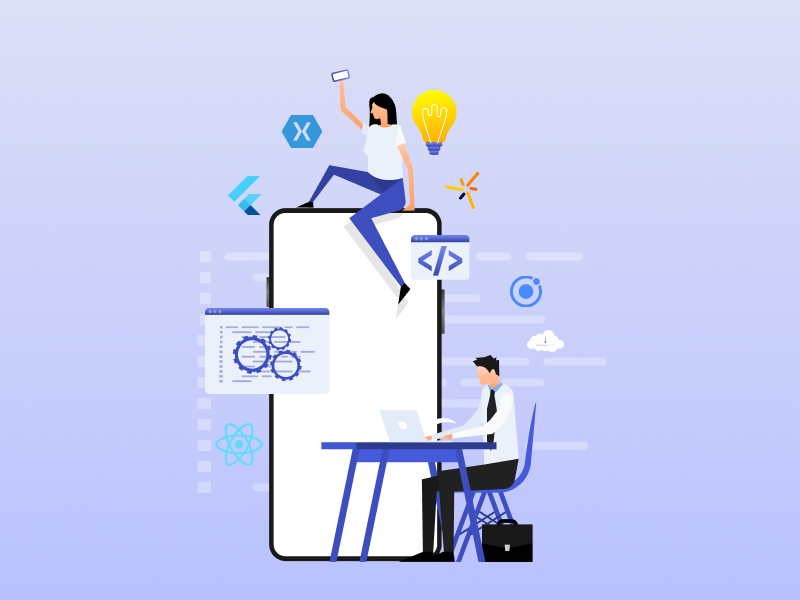 Statista states that mobile app downloads will reach 258 billion in 2022. Creating a hybrid mobile app lets you reach multiple operating systems simultaneously. It saves time and money effectively. You must choose a compatible framework to make the most of your hybrid app development.

But which framework should you choose? There are many hybrid app frameworks to choose from today, but it can be challenging to pick the best one if you don’t know what you’re looking for. This post will help you find & choose the best framework based on your needs and goals to succeed in the mobile marketplace!

Here’s what you need to know about hybrid app frameworks before deciding.

Due to their versatility, there has been a sharp increase in demand for hybrid mobile application development over recent years.

Here’s an infographic depicting the market of different hybrid app development frameworks in 2021. 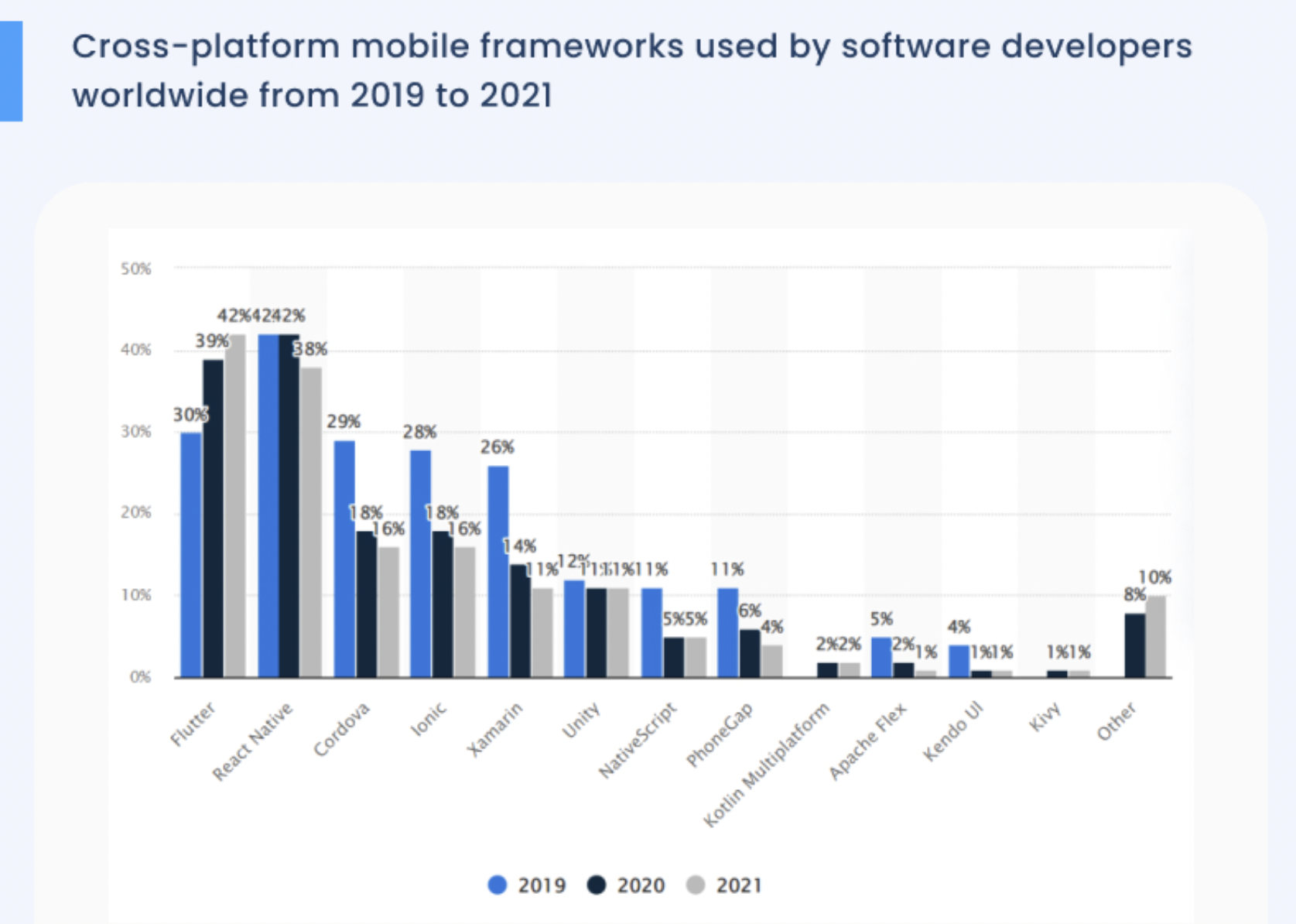 This article will highlight some of the top hybrid mobile app frameworks for 2022.

1) Flutter – Ability to Go Beyond Mobile

Created by Google in 2017, Flutter is a cross-platform app development framework that allows developers to use one codebase to build an application for both iOS and Android devices. This app framework has been trendy since its launch because of Google’s involvement and its versatility.

Statista states Flutter has a market share of 38% in 2021 among the most used cross-platform frameworks. Many users say they enjoy working with Flutter because it is easy to learn and quickly gets ideas into apps. Overall, Flutter receives high ratings from most who try it.

React Native is counted among the exciting hybrid app development frameworks. It offers a more native look and feel and first-class support for things like TouchID and pushes notifications, and React Native is appealing.

Its popularity grew when Facebook announced it was using it in production. As per Statista, React Native has a market share of 38% in 2021 among the most used cross-platform frameworks.

An Interesting Idea – Why is Hybrid Approach a Good Choice for Mobile App Development?

While it’s probably not entirely fair to call Ionic a framework, it is more of a hybrid mobile app development tool and has become one of the most popular in recent years. That’s primarily because of its affiliation with AngularJS. Ionic and Angular can help you build cross-platform mobile apps quickly, even if you don’t have any significant programming experience or knowledge.

In addition to being one of Android’s top tools for creating hybrid apps, Ionic also has an impressive user base: It claims that there are more than 30 million downloads per month and growing. According to Statista, Ionic has a market share of 16% in 2021 among the most used cross-platform frameworks.

With Xamarin, software developers can use a single programming language (C#) to create mobile apps for Android, iOS, and Windows devices. The framework creates native mobile apps using up-to-date tools and an efficient coding workflow. Statista declares Xamarin has a market share of 11% in 2021 among the most used cross-platform frameworks.

You can think of Xamarin as a type of precompiled C#. There are some apparent pros here for developers who don’t have experience with cross-platform development or multiple programming languages. Leveraging all your existing skills is excellent, but there’s also a potential risk here.

Solar 2D is counted among renowned hybrid app development frameworks that work with native iOS and Android app development languages. The strength of Solar 2D lies in its use of simple, standard Lua code to create native applications while still providing all of the features you’d expect from a hybrid mobile application.

Today, Solar 2D has more than 220 published apps in its catalog, including titles like Invincible Armada and Inklingo Photo Lab. Plus, it’s free to download and distribute your App on iTunes or Google Play using Solar 2D technology.

Pros of using Corona SDK for your Hybrid app development

JQuery Mobile has a steep learning curve for beginners, but if you understand how JQuery works, it is an easy framework to grasp. JQuery Mobile is used for cross-platform compatibility and is optimized for touchscreens. The resulting website or application looks and feels like a native app.

JQuery Mobile also features media queries that make it easier to adapt mobile apps to various screen sizes and resolutions. One downside of using Jquery mobile is that when users visit your site from a desktop computer, they are directed to an error page because, by default, most websites redirect their desktop traffic to a mobile version of their site.

In short, Angular is a framework for developing hybrid mobile apps or responsive web applications using HTML5 & CSS3 that run on mobile devices with a browser or as standalone native apps using Apache Cordova.

The application development process involves writing HTML/CSS/JavaScript code that describes your desired application structure instead of how it looks.

With over 20 million downloads since its first release in 2007, Titanium is one of the most widely used hybrid mobile app frameworks.

XDK is an HTML5 hybrid app development framework that lets you use web technologies to develop cross-platform apps for Android, iOS, and Windows Phones. Cross-platform capabilities combined with a simple codebase make XDK one of our favorites.

You can even create your custom version based on it. The downside? The interface isn’t as advanced as other frameworks, and there aren’t many documentation options. Still, if you want to test out mobile app development, XDK is a good option.

Read Also: Hybrid App Vs. Native App: Which is The Best For Your Business in 2022?

For the last couple of years, we’ve seen a rise in demand for hybrid app development among startups and established businesses. Many of you have been asking us why, and we’re excited to give you an answer finally! For your convenience, we’ve put together this list of the top 5 reasons to choose hybrid mobile app development, so you can see precisely what makes it such an attractive option.

With hybrid apps, you can make your app available on Android and iOS without any significant hiccups. Since these are web-based apps, they’re compatible with nearly every modern mobile platform. It allows you to easily scale and deliver an exceptional user experience across multiple devices and platforms.

Additionally, since it uses native code to build native features, everything will be highly optimized for performance. Most users expect apps to load almost instantly—the instant loading offered by HTML5 ensures optimal speed for your customers regardless of their device or OS version.

You won’t have any issues supporting customers who don’t use state-of-the-art equipment; they will still have a great experience using your application regardless of their OS version or hardware capabilities.

Hybrid apps are designed using web technologies, which makes them highly flexible. Whether you’re building an app for Android or iOS, your developers will use open-source libraries that are compatible with both platforms.

As your business grows and your needs change, so can your mobile app. Simply update your web app, compile it for a new platform—and voila! You have a brand new feature or version of your application.

The goal of your mobile app is to get it into your customer’s hands as quickly as possible, right? A hybrid approach allows you to do just that. Using web technologies like HTML5 and CSS3 will enable you to move fast and get your prototype in front of customers quicker than an all-native team.

Then when you’re ready for launch, simply switch out the web views with native components. Voilà! Your app has gone from prototype to final product without missing a beat. It’s fast—real fast! And if you’re growing at exponential rates, waiting months (or even years) to test out your idea isn’t a viable option.

Hybrid mobile app development saves you time and money by limiting your changes later in development. No matter how solid a design or prototype is, it’s always cheaper and easier to get things right from day one of development—and hybrid mobile app platforms can do just that.

Some platforms have been shown to slash up to 70% off of standard development costs. Give yourself a fighting opportunity for success by choosing a venue with cost-saving features baked in from day one.

According to a recent Forbes study, over 75% of new mobile apps fail. On top of that, app development can be time-consuming and expensive – with a cost per app ranging from $1 million to more than $5 million.

One alternative is hybrid mobile app development – a process in which a cross-platform framework allows developers to create an app with native functionality using HTML5, CSS3, and JavaScript.

Also Read: Top Web Development Frameworks for 2022 Comparison: All You Need To Know

That was all about the top frameworks to go for hybrid app development. The most compatible framework largely depends upon the kind of project and its core requirements.

Connect with a hybrid mobile application development company in India for a free consultation and affordable development of your project.

Is WhatsApp a hybrid app?

No. WhatsApp is not a hybrid app. It is a native app

Is react native a hybrid app?

Yes, React Native is one the most rapidly used hybrid app development frameworks available out there.

What is a Hybrid Mobile Application?

Hybrid mobile applications are created using HTML5 and CSS3 or JavaScript and are compatible with running on multiple OS. In addition, hybrid apps can also include any native mobile features, such as a camera, and get developed using cross-platform tools. Because hybrid apps get built with web technologies, they are compatible with any operating system.

Most importantly, these applications are easily scalable and have fewer development costs than native apps. Although users on most platforms will download an app more quickly if it got natively developed for their devices, they might choose to use a hybrid app if its performance is better than other similar apps.

What Is a Cross-Platform Framework?

A cross-platform framework allows developers to build applications (apps) for different platforms (iOS, Android, Windows, etc.) using the same underlying codebase. These frameworks let you write your application only once and then deploy it across all mobile operating systems.

Why Should You Go for Cross-Platform Development?

The foremost reason to go for cross-platform development lies in the lower cost it requires compared to other platforms. Developers can use a single code base and develop apps that run on iOS and Android without incurring any extra financial burden. It also ensures the fast development of apps and reduces time-to-market for app developers.

What Is an App Development Framework?

An application development framework is a collection of pre-developed software components and technologies that allow you to develop apps in less time with increased security. Various frameworks are available, including ‘native,’ ‘hybrid,’ and ‘web.’

What Is The Difference Between Native, Hybrid, and Web apps?

Native apps are built to perform on a specific platform. For example, an app developed for Windows Phone will not work on iOS or Android. On the other hand, hybrid apps are built using web technology that runs inside a native container.

Hence, they are capable of running on multiple platforms. Native apps are faster, have access to more features, and provide a better user experience. However, they also require expert developers with in-depth knowledge of the platform.

On the other hand, hybrid apps do not offer as good an experience because of their inherent reliance on web technology. Web applications, like native or hybrid apps, are platform-independent and are accessed using a web browser.

However, they are not as fast or responsive as native or hybrid apps.